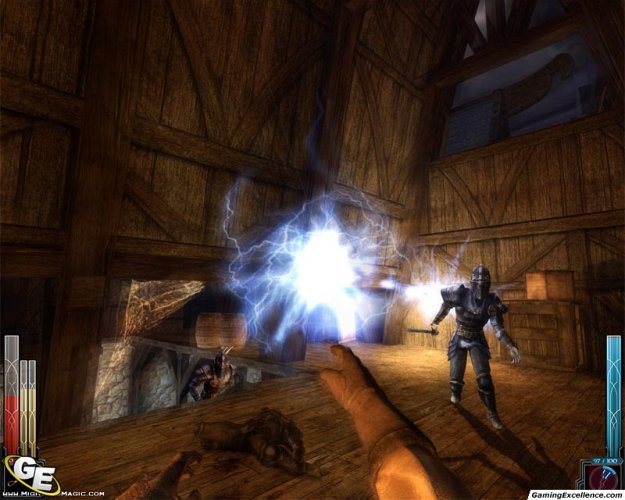 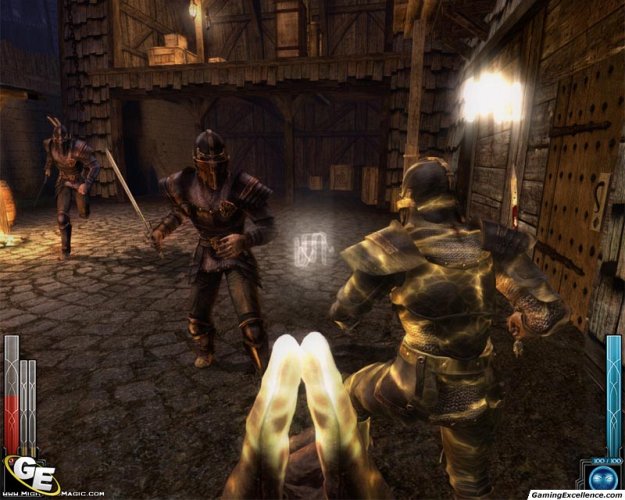 There's a lot to say about Dark Messiah of Might and Magic. It tries to do a lot of things at once using a powerful engine, but unfortunately can not seem to accomplish all of its tasks. What's left, however, is a fairly enjoyable game that just needs to be tweaked to make it much more.

The game begins simple enough: you are an understudy to the mage Fenrig. After a quick tutorial mission, you are sent to a distant land in order to retrieve a mysterious artifact of power, and discover its purpose along the way. You'll fight orcs, goblins, undead, and all the other staples of a fantasy universe. It's a decent enough story that pushes the game along (although it's really just background to the gameplay), but the biggest problem with it is that any plot twists and turns are spoiled almost entirely by the manual. Additionally, it tends to be pretty heavy handed with its foreshadowing, and almost immediately after the first level or so, it's not hard to figure out the rest of the story.

Still, though, the emphasis here is on the gameplay. There are a few ways to play the game, based on your preferences: you can either charge headfirst into battle and slash your way through the foes, you can blast enemies from a distance using a retinue of magical attacks, you can stick to the shadows and backstab the bad guys, or you can stay back with a bow and quiver and let fly. Each way presents its own pros and cons, but things seem more weighted towards the warrior way. The battles are more visceral and enjoyable, and it's a lot more challenging to stay alive otherwise.

Instead of getting you to make a single choice into which path of gameplay you're going to use, Dark Messiah instead uses a somewhat simple skill system. As you progress through the game and accomplish certain objectives, you'll be rewarded with skill points on which you can spend on new skills. Each skill requires a certain amount of these points in order to obtain (or raise to the next level), and grant you a special power or upgrade, such as raising your maximum hit points, giving you another spell, or giving you the ability to pick locks. Most skills require you to have obtained a previous skill, and the more powerful ones require more points. Standard stuff, really.

The skills are, for the most part, balanced, though some are obviously more useful than others. My biggest irk with the system is the way the points are given to you. Usually these are awarded when reaching a certain point in the plot, so there is only a maximum number you can retrieve. You're also sometimes given an extra side quest as well, which might net you a few points. This is the problem, the number of points and the frequency which you're given them. They seem to be arbitrarily assigned at the most random times, and while you might get two points for just breaching a wall, you might only get one or two for defeating a massive cyclops. Still, later, for getting through a difficult obstacle, you might get only one point or none at all. It's completely random, and you never seem to have enough.

Melee combat is fairly well-implemented, and there's a bit of strategy to how to take out your foes. In addition to quick swings and stabs, if you hold the attack button down, you'll execute a power attack that changes depend on what direction you're moving in when you prepare it. In addition to you attacks, you'll get a kick that, while at first seeming useless, is important to pushing your enemies back into traps and to the ground, where you can finish them off with a final blow. To vary the combat, there are also a few boss battles thrown in, like taking down a cyclops or fleeing a giant worm along a precarious cliff path.

The environment plays a huge role in how you play, thanks to the power of the Source engine. While you could go through the game just taking out your enemies with a good blade to the head, there's not enough entertainment in that. Scattered about the levels are pits, spike racks, and precariously balanced barrels and debris. Place a kick or a power hit correctly and you could send your opponent flying down a cliff or right into the spikes for an immediate kill. Some of these traps seem obviously placed and stand out like a sore thumb from the rest of the level, but in general they add something interesting to the combat.

While the single player mode is decent, and might have you replay it to see what the other skills and abilities are like, the real value lies in the multiplayer. Three modes await, the ubiquitous deathmatch and team deathmatch, the likewise common capture the flag, and something special called Crusade mode. Deathmatch and CTF are what you expect, though a little peculiar when played with melee weapons and attacks, but Crusade is an interesting play. In this, you'll play as two teams: humans and the undead, in an attempt to capture territory and reach the base of the other team. As victories are won, the next map will be loaded and battle will continue again.

Multiplayer differs from the single player mode heavily in the classes and abilities. To begin with, there are a series of set classes you can choose from, each with carry their own abilities to level up in. Pick the Warrior, and you'll have an array of weapon, strength, and armor-based skills, while the Cleric is based more around healing, protecting, and casting curses. There's also the Archer, who specializes in ranged attacks and abilities, the Assassin, who stays to the darkness to kill, and the Wizard, whose magic spells are powerful. As you fight and complete objectives in each of the multiplayer modes, your character will gain experience and level up, receiving skill points that can be distributed between abilities. As long as you don't change the server, these skill points carry between battles.

Multiplayer is interesting, but odd after playing the single player mode. Melee attacks don't have the same weight as they do when you're fighting orcs or goblins. Since it would be irritating to get knocked to the side every time you get hit, the main way to tell that you've hit or been hit is a little indicator for the amount of damage dealt.

What's left is a game that's pretty enjoyable, and a strong attempt to put some strong action and visceral combat into the first-person-slasher. The addition of the physics adds some depth to the combat, and the multiplayer gives a reason to play after the story has been played. A flawed game, but a very decent one nonetheless.