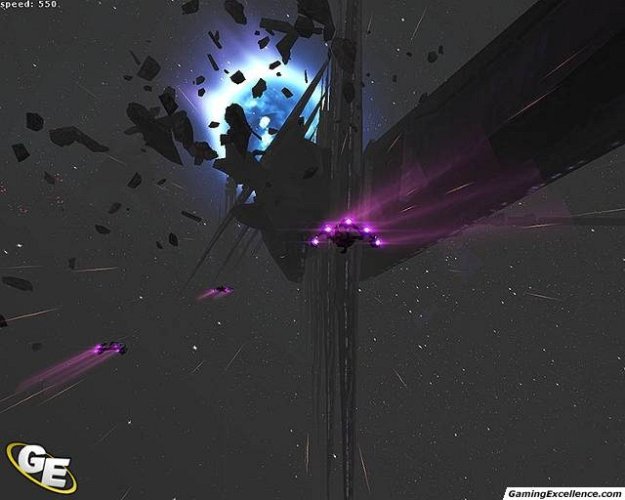 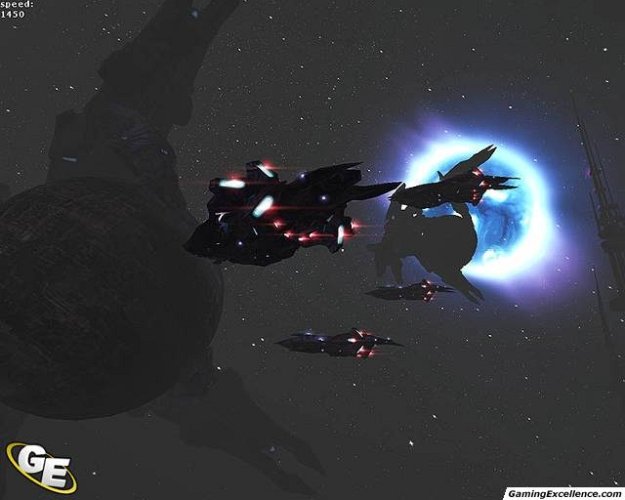 There comes a time when enough is enough.

For me, it is Dark Horizon.

It's not that it is a terrible game. Far from it - Dark Horizon has battles galore for the arcade-loving space shooter, battles which prove themselves to be challenging and engaged (dropping attention from a mosquito-like swarm of enemies results very quickly in black-screen death). It has a very cool ship customization system, combat modes you can shift between, some glorious graphics in the form of explosions and nebulas and interstellar lights.

It just also makes no sense.

Dark Horizon markets itself on the infinitely vague "Action" platform, but takes its pride on being a third-person shooter with a heavy RPG twist. This should be awesome, and in some games it is, but the story (read: RPG) elements woven through Dark Horizon like a noose serve only to wring every bit of potential life out of the game, leaving it alone to dangle in the breeze while a single carrion crow soars down to nibble upon the pale, pasty flesh of its ruin. Okay, see that metaphor? That metaphor I just wrote? That metaphor that was overdramatic and didn't actual make much sense when you think about it a little too hard? That is an example of the kinds of metaphors that crop up every thirty seconds in Dark Horizon.

Somehow, against all physics, this game manages to be both deep and shallow. The plot runs: you take on the role of a newbie Guardian who has just taken the helm to fight against the mysterious but definitely evil force known only as The Mirk. What is The Mirk? I don't know, but it's Evil - and you're infected with it so that's no good. Also, it turns out that humanity just found its last best hope in the form of a mysterious but definitely good super-weapon known only as The Light Core. Which unfortunately is still being come up with, and defending it is what you and your buddies are for. Commence lasers.

Despite a storyline that is, literally, "The Dark" (mirk = murk = dark) versus "The Light" this game is accompanied by a serious amount of literature, back story, encyclopedia entries, research, dream analysis, philosophical conversations, voice-over musings, etcetera, etcetera. Normally, this sort of thing is what I play games for - it "turns my crank," so to speak. But have you ever written an essay twenty minutes before its due when you haven't actually researched the subject, but you have watched a whole lot of TV about the subject and so you just sort of string together buzzwords in the hope that it'll make sense? Dark Horizon is a whole lot of buzzwords that don't make sense. It's oodles of fanfare that, in the end, comes down to one trumpet with a megaphone. With nonsensical phrases like "disaster has taken its harsh grip" and nonsensical terms like the "meta-force" and the "psychomatrix," it's as if somebody checked out every H.P. Lovecraft novel and proceeded to highlight words at random, later combining them into things that sound like they should mean something important (this type of behavior led to "synergy," people!).

The no-substance RPG bits are easily the worst parts of the game - and they, unfortunately, make up a ton of it. However, the arcade-style battle sequences are fun in a manic sort of way. It's dogfight heaven in its truest form, to both its credit and detriment. Enemies zip around you in little metal triangles - you lock on and shoot. This can get boring (and painful on the wrist), but in short spurts it's nice to have the opportunity to blow stuff up and make use of the lovely graphics. And the previously-mentioned battle modes add a bit of spice to the point-and-shoot formula - do you want the heavy defense of Shadow? The heavy offence of Corter? Like every decent shooter, there's no perfect weapon, no indestructible ship. Also, the technical work you can tinker with (customizing your hull, your armor, your shields, your kill machine) is a jolly good way to pass the time.

But again the illogical elements of the all-too-hardcore plot ram themselves in your way. The AI (both the enemy's and your shipmates') is either single-minded or absent-minded, in the very literal sense. Your shipmates are straight-up useless in a fight - which, for all the helpful information and philosophic rambling they feel like dispensing every five minutes, makes their presence nonexistent. And your enemy seems interested in nothing but killing you - you personally. They don't target your mates in front of you (making commanding and group strategy impossible); they don't target the Light Core you're guarding. They just seem to have a serious grudge against you and you alone, so much so that a major stratagem among the Mirk seems to be kamikaz-ing their ships straight into your face. For beings that like to flit around like moths and twirl overhead like gymnasts they also seem really fond of ramming your ship like semi-trucks, and it disrupts the mood just as much as it costs you some serious hit points.

The verdict here should be pretty obvious. For a simplistic shooter it's actually great. The space setting gives the graphics folks a real chance to shine, and they do - nebulas melt into deep space like oceans and explosions bloom in the night sky like daisies. You get to make your cruiser a serious hotrod, you get to relieve any stress work might be causing you - as a blow-stuff-up free-for-all it really works. For a game built on a battle system designed to be fun and simple, you have to wonder why the story's just so complex and grim. In the end, it turns out a lot like space: majestic and somber, but even emptier than air.