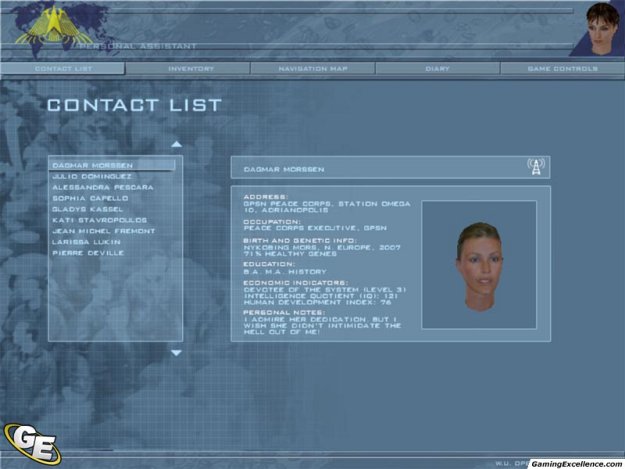 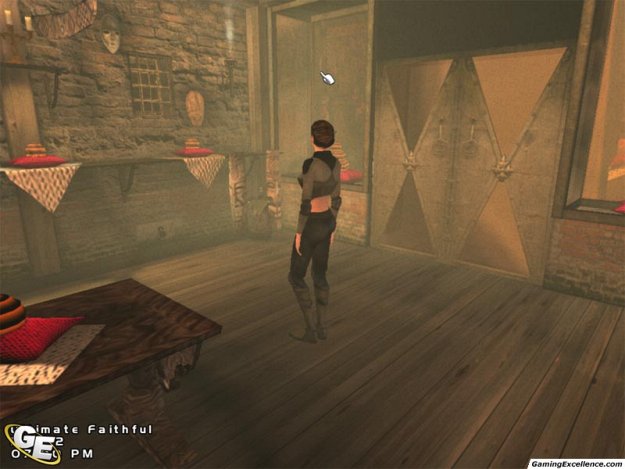 Culpa Innata is a world that developer Momentum and publisher Strategy First took much effort and care to develop, and the end result welcomes adventure-seekers into its realm. The World Union is a united front that encompasses everything that makes a society perfect. Obsessed with ideals that would have made Darwin proud - only the smartest, wealthiest, and healthiest are worthy of this utopia - those of the World Union appoint Peace Officers to ensure the protection of their advanced lifestyles.

The highlight of Culpa Innata is its ability to encourage the player to interact with the citizens of Adrianopolis. While investigating the game's first areas will provide clues and items that fall into the story later on, it is the interaction with other characters that will lead to the game's further areas. With this concept in mind, Momentum took extra effort and time to ensure that the expressions and personalities of the folks Phoenix will interact with engage and inform the player. This strive has led Culpa Innata to feel like a puzzling adventure title with a more focused flair for environment interaction. While this balance is shaky in some areas, the overall progress of the game sticks true to its formula and provides a fulfilling gaming experience.

Culpa Innata is a pure point-and-click adventure. With that in mind, controlling Phoenix is as simple as clicking where you want her to go and waiting. Double-clicking on an area of the environment will make Phoenix run, the inclusion of a key to hold down while clicking would have made quick exploration a bit more enjoyable. Despite this small setback, the puzzles that prevail throughout Culpa Innata rely on nothing more than well-placed clicks and an open mind. While this concept might fall short in other games, the developers of Culpa Innata have done well to include an array of gadgets and cursors that sport varying interactions.

Phoenix will spend a good amount of her time on her Personal Assistant (PA) chatting with contacts and examining items picked up throughout the game. While the PA comes in handy for simply investigating, her office computer will provide the means necessary to interact with these items in new ways. This will provide some linear puzzle-solving early on in the game, but the "locked" aspects of the computer will not come into play until further into the story. Another nifty feature of the PA is the ability to instantly navigate to any chosen location that has already been discovered. As Phoenix speaks to more characters and discovers new plotlines, her PA will automatically update new areas of interest. Since some of these destinations are a good distance away from each other, this is a very welcome feature.

As the story progresses and the real culprits begin to reveal themselves, Phoenix will spend a chunk of her time reporting to Chief Morssen, and even her friend Allesandra. It is neat that Momentum wanted to include a feature that allowed players to recall information learned throughout the storyline, but more often than not these spontaneous encounters feel bland and unnecessary. The only real reason to discuss the learned facts of the case with Chief Morssen is to allow Phoenix to request warrants on characters she thinks are guilty. However, it is not as easy as simply suggesting a person is worthy of the blame. Phoenix must have solid proof that a person is a wrongdoer before bringing their name to the table. Spending time conversing with important characters is an excellent way to build up a repertoire of facts and hard evidence. Not only that, but the more attention the player pays to these conversations, the faster they will learn not to drive potential protagonists away. This is important when trying to save time, as an unsuccessful conversation will require Phoenix to wait until the next day to pick up where she left off. While some of the forced conversations feel unwanted, speaking with the odd array of World Union citizens is often more fulfilling and rewarding.

To be honest, the environments in the world of Culpa Innata will not leave many players breathless, and the graphics feel a bit out-dated. However, Momentum has taken a lot of time to include many environmental additions, such as posters and plaques that dictate the history of the World Union and its cause. Not only that, but each and every area that Phoenix will visit is abound with colorful and artistic decor. Since much of the time is spent interacting with characters, players will also appreciate how well the voices and mouth movements are in sync and believable. The 3D engine and dynamic cameras that Momentum utilizes do well to simulate the diverse interactions necessary for a title of this genre.

An area where Culpa Innata stands out is its upbeat musical score and variation of sounds. The background music provides the perfect ambience for exploration and puzzle-solving, and the catchy beats are bound to lead to some unmindful head-bobbing. Environmental sounds such as birds chirping and the clip-clop of Phoenix walking work well to provide a consistent feeling of player interaction. The actors that supply the voices for the odd assortment of characters in Culpa Innata do well to add distinction, but some of them are annoying or just too bland. Despite this, the only real complaint with the sound of the game is the stutter that sometimes occurs during a cut-scene - more than once, the sound would stop and repeat three times like a broken record. While very exasperating, this problem was rare and did not last long at all.

While Culpa Innata may not be the tiptop of its generation, it is a solid adventure title that promises to engage and entertain the player. The interesting (and sometimes rude) interactions that Phoenix has with other characters are humorous and provide insight and clues about the underlying plot. From the initial hint of its butterfly theme in the first few puzzles, Culpa Innata engages the player and promises to keep a few hardcore adventurers glued to their seats until the ending credits. Those that want to get the most out of the game's experience should involve themselves with the history of the World Union, and explore every nook and cranny. Despite a few setbacks and shortcomings, developer Momentum and publisher Strategy First have a solid first-person adventure title on their hands. Can we hope for a sequel?