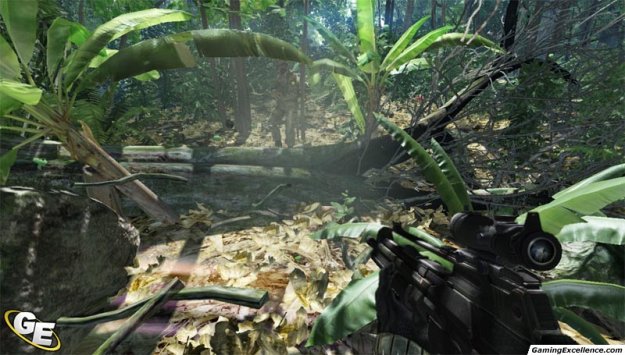 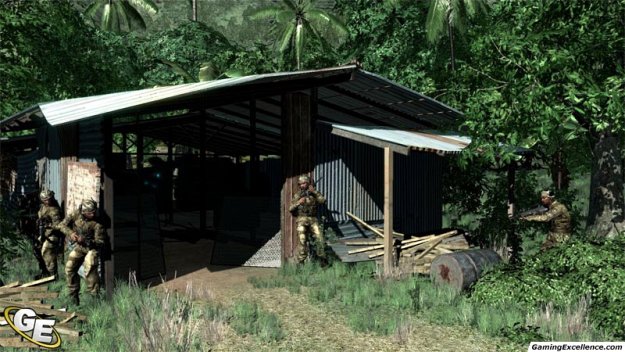 Crysis is something else: stunning graphics, an underused setting, an epic story, and an enjoyable multiplayer game to boot. People playing this will likely recall a game from many years back called FarCry, with good reason. Crysis is the evolution of that title, using a new engine, but keeping the general feel of a 'hell in paradise.'

It all begins with what looks to be like a simple rescue mission. You and your group, equipped with the latest in nano-augmented suit technology, parachute into North-Korean-occupied territory to find an archaeologist. It should be a simple rescue mission, but something is definitely wrong, and as you continue through the island you've been dropped into, you'll find that there are more players in this game than you think.

Running into the fray, guns blazing, is always an option but a difficult one. It doesn't take a lot to bring you down, and when you have at least half a dozen enemies gunning for you, things can get real deadly real quick. Hiding in the underbrush allows you to stay out of sight of enemies, which is crucial when lookout towers are scattered across the territory that you need to move through. The result is gameplay that tends to be tense at times, but at others sometimes just feels like the bushes are playing a game of hot-potato, and you're the potato.

The game offers some magnificent environments, a notable difference from the usual faire in its genre. Maps span kilometres, which is an impressive feat that allows the game to be played differently than just running through small corridors. Still, the game doesn't require you to run around much, instead providing a series of land, sea and air vehicles, all of which easily controlled. Note however that driving around is a quick way to get shot at.

Though visually stellar, the problem with the environments is that many of them consist only of a valley that makes you move in a straight line to get to your target, as opposed to the wide-open nature of others. These valleys are probably more open than most FPS games, but they're a stark contrast to other sections of the game, and feel all the more constrained because of it.

The presentation is pretty top-notch: great acting, great story, and a pace that keeps the action going throughout (albeit with an ending that leaves too many loose strings; keep in mind this is part one of a trilogy). And of course, the graphics will blow any gamer away. Things look good; really good. Whether it's the reflections on the water, the facial textures of characters, or the fact that you can see for miles and miles and miles, it's clear Crysis has set the bar for graphical prowess. Of course, this comes at a heavy price for the general gamer.

The graphics of Crysis, while impressive, require some serious hardware. My rig may not be top-of-the-line, but it's got a recent graphics card and even then, medium settings are really all I can do if I want to run the game smoothly. If you're willing to take a hit on the frame rate, you can raise some settings, but unless you have some power under the hood, you'll just have to settle with "very pretty" settings as opposed to "eye-popping". The game does manage to run on even some low-end computers, but you'll have a lot less to look at.

The single player campaign may be fun, but it does end, and when it does, the multiplayer game is where you go to continue the action. Luckily, it delivers quite excellently. While there is the typical death-match mode (known here as 'Instant Action'), the real fun comes from something called 'Power Struggle.' This mode is an intertwining mix of action, resource management, and strategy. The players are divided into two teams: the Americans and the North Koreans. On each side of the (generally) large maps are each of your bases, and your objective is to destroy your opponents'. But it's not quite as simple as running into the base and shooting it up. For one, automatic turrets defend the base and taking them out takes a lot of force. Even when you have access, you need some real weaponry to take out the base. This is where the capture points of the map come in, and to get the real weaponry that these provide, you'll need prestige as well.

You can purchase some simple weaponry in your base, with the currency of the game called 'prestige'. As you kill and capture various areas, your prestige rises, and when it's risen enough, so does your rank. Doing this will bring up your starting prestige, allowing you to purchase bigger and better weaponry if you get killed. And though you get access to a large variety of weaponry, equipment, and devices, you'll need to capture various areas of the map if you want a vehicle or the heavy weaponry.

These various points add the element of strategy mentioned before. There are the war and air factories, which allow you to purchase land and air vehicles respectively; the prototype factory, which allows purchase of powerful alien weaponry as well as the nuclear and singularity weaponry that's required to take out the enemy base; bunkers that allow you to spawn in different areas and purchase weaponry when away from your base; and the energy plants.

The energy doesn't have an immediate effect on the game, but it is required. There are three energy plants in every level, and controlling them increases the rate that your team's energy level will increase. Gaining access to the aforementioned alien weaponry requires your team to get a fifty percent energy level, and being able to build the base-destroying weapons requires a fully-charged energy meter. Still, building one of these weapons means that everyone on the map knows where you are, and paints you as a really easy target.

All these elements combine to make an engrossing experience that's pleasantly different from the typical death-match-style multiplayer modes. They cater to every style of play, though if there is an imbalance, it seems that the large areas favour sniper-types extremely well. Still, that is not to say that others can't excel, it just means you need to be a little more vigilant while wandering around to avoid getting shot by someone that you can't even see. The ability to use your suit's powers makes for some unique combat as well, as you can jump over jeeps attempting to run you down, enter stealth and hide in a bush with a rifle, nearly invisible, or punch an opponent and knock them down in a single hit.

The biggest problem here is the fact that to have an enjoyable match, you need a lot of players, and there aren't a lot of servers with sufficient amounts out there. So, finding a large, fulfilling match is not very easy to do.

Crysis has definitely raised the stakes when it comes to graphics, and is probably going to be used as a technical benchmark for many years to come. Its stunning environments and interesting gameplay that changes with the suit's powers create a very enjoyable experience. Of course, to really enjoy the title, a pretty decent computer is needed but one can still enjoy the gameplay without being able to see every blade of grass on the ground. There's also something to be said about the multiplayer mode that manages to combine the wide-open areas, the powers of the suit, and the many weapons and vehicles of the game without making it just like any other first-person shooter. So, while there are some minor hiccups from time to time, overall the game plays well, it's fun, and it's something FPS fans are going to enjoy for a long while.