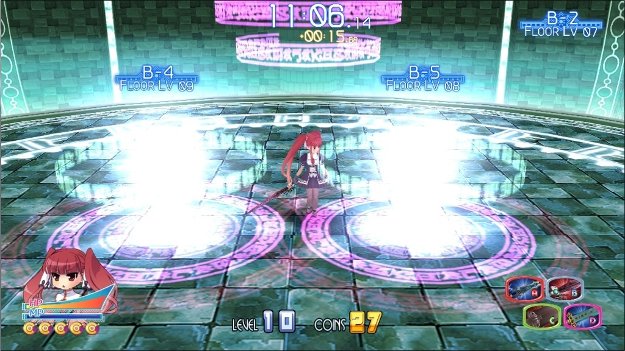 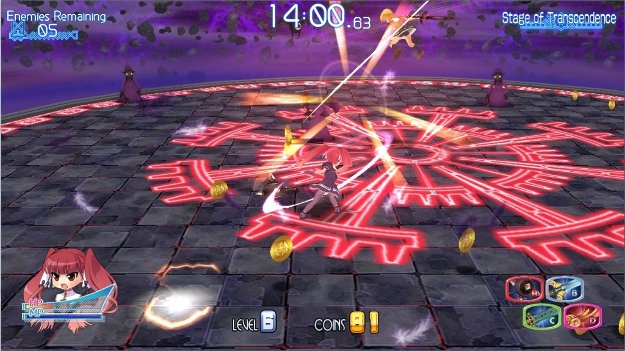 Croixleur (don't ask me how to pronounce that) is an example of one of the few indie games to cross the shores from Japan to get localized and released here in the west - unfortunately, it's definitely not one of the better ones.  A mostly-needless story about a girl who must reach the top of a tower before her rival in order to win some sort of competition about who has the best faction is largely put aside in favour of arena combat and, when they are talking, reminscing about bathing.

Basically, I fast-forwaded through everything that I could.

The meat of the game comes from ascending a tower of combat, a process known as 'The Adjuvant Trial' - as Lucrezia (aka Luc), you'll need to fight off waves of monsters, beat away bosses, and do it all in fifteen minutes or less. 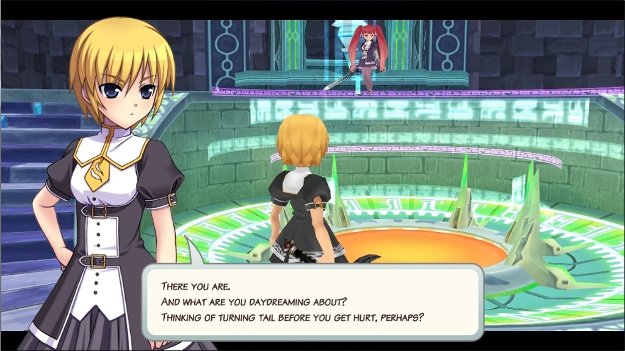 The combat itself is pretty good, with quick combos and fast reflexes required to make it through alive and on time. This depends on chaining attacks together through dodges and mid-air dashes, using powerful MP-training techniques, and not getting hit in the process. And while the game does deliver in this respect, it feels a little flat after a while, since there aren't any new abilities or attacks unlocked as you play. Likewise, the enemy variation isn't spectacular, giving you maybe five or six kinds of enemies, with pallette swaps thrown in when they get stronger.

You do unlock secondary weapons upon finishing games (win or lose) that give you different attacks, but so many of these are similar, and the weapons themselves don't really change anything besides the one attack that they execute. They're useful, but much like the rest of the game, a shallow addition.

Oh, and don't bother playing this with anything other than a controller, just a heads up.

The game's challenge comes from doing it all in fifteen minutes - I've killed the last boss and have only had a couple minions left on the screen when the timer ran out. This didn't make me happy. And, if you haven't gleaned this yet, this fifteen-minute period is the entire game, more or less. You can get different endings based on how much time you have left on the clock, but the rest of the game is the same. If you die, or run out of time, there's no 'continue', just a kick back to the title screen.

There are additional modes besides the (loosely-named) campaign such as Endless mode, so if you really enjoy the combat system and just want more of that, the game has you covered. But in general, I can't help but wonder if this is the best the arena-combat genre has to offer - the story is not only laughable, but weird, the combat lacks depth - though is quick and tests your abilities - and the game itself is, at most fifteen minutes in length. If it scratches your itch, alright, but there's just not enough meat here to warrant a recommendation.