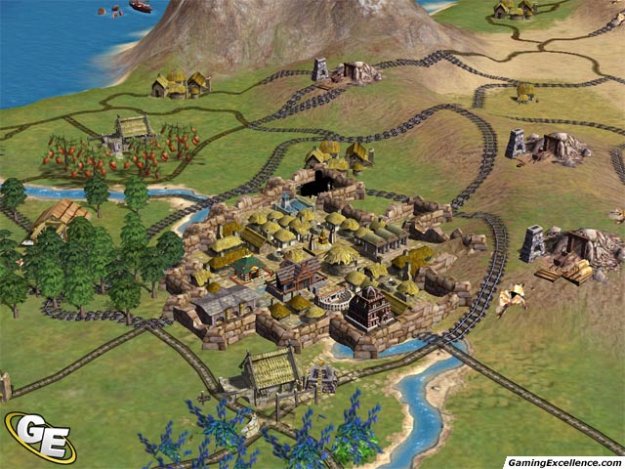 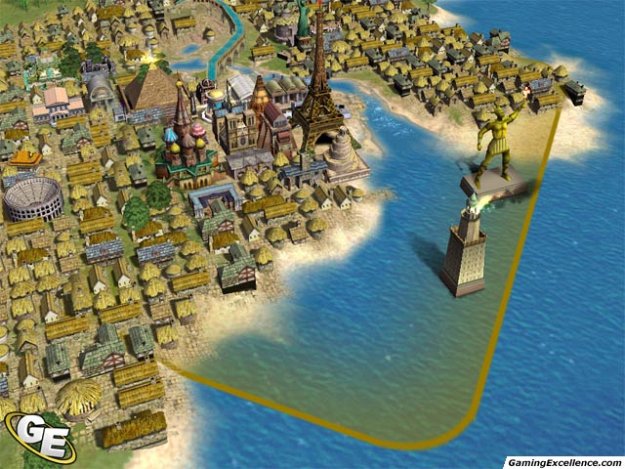 In development since 1990, Sid Meier's Civilization series has defined and expanded the genre of empire-building strategy games. Each Civilization game has been based on exploration, discovery, building, diplomacy, and strategic combat. The latest instalment - Civilization IV - is the culmination of 15 years of experience, with the result being yet another milestone in strategic gaming.

Unlike most strategy games that are released with a campaign mode, Civilization IV does not focus on one single story but rather tells a separate tale with each individual game you play. When you start a new game, there are a few steps that need to be taken before you can begin. The first step is to decide what kind of world the game will be played in. Map types include continental and island terrains, as well as maps covered with mountains. Next, you must choose the weather conditions and sea level for your newly formed chunk of land. The final step is to choose the civilization you will use, as well as appointing a leader for your nation. Each leader has two unique abilities that offer gamers a fair bit of choice. For example, the Russian empress Catherine has financial and creative abilities, which gives that civilization +2 culture rating per city, as well as extra gold for each cottage that is built. Each of the 18 civilizations starts with a unique unit as well as two basic technologies. Civilization IV also comes with a set of customized scenarios such as a scenario for the Second World War. These scenarios modify unit names as well as research trees in order to better fit the era that the game is being played in.

A new type of unit that has been introduced in Civilization IV is the 'Great Person'. These units can be born in any country and can have a significant impact on the course of the game. There are four types of great people: Artists, Prophets, Engineers and Scientists; each of these specializes in certain areas. The Artist is excellent for giving a city a quick boost in culture. This is especially useful early on in the game when your civilization is battling for territory since your country's borders are set based on your cultural ratings. The Prophet has the ability to create a special building in the founding city for any of the six available religions, which in turn provides exceptional bonuses for that city. Engineers have the special ability of completing the item that is currently being built by a city. This is very handy when you are racing against your opponent to complete a wonder. The final category, Scientists, have the ability to research technologies. This ability is great for moving faster along the technology tree and gaining an advantage over you opponents. Each great person can alternatively join a city as a super specialist. These specialists give bonuses to economy, culture and construction depending on the great person type.

One of the main new features that has been incorporated into Civilization IV is the concept of civilization civics. Each civilization is given five civics - government, legal, labour, economy, and religion - that slowly develop as new technologies are discovered in the research tree. Each civic in turn has six possible modes that it can begin with. For example, a player's religion civic could be set to pacifism, which gives 100% birth rate of a Great Person in all cities, but costs gold for each military unit per city. The other civilizations on the map will have their own preferred civics and will like or hate your nation depending on which civics you choose for your country. Therefore, it is very important for the player to pick his or her civics carefully in order to create the perfect balance.

Gamers who have played previous instalments in the Civilization series will be pleased with the addition of a new technology called 'Future Tech' to the research tree. Future Tech is the most advanced technology along the research tree and is also one of the more useful ones. In previous Civilization games, the technology tree could be completed and the gamer would have nothing left to research. In Civilization IV, Future Tech is continuously researched. The tech gives the player a bonus to happiness and health in each city, which provides another incentive to continue putting money into your research department towards the end of the game.

The graphics in Civilization IV have undergone a complete upgrade and represent a great improvement over the visuals in Civilization III. The ability to zoom the map in and out to extreme distances is a nice feature, and lets the user choose how he or she wishes to view the game. The detail on each individual unit model is vastly improved and makes for a more visually appealing experience. Also, units are now displayed as groups, typically in threes, which is a neat addition. The game's introductory and ending video are also very nicely done and make it that much more attractive. Another really neat feature is the addition of short in-game videos that play when your civilization completes the construction of a wonder.

Civilization IV really shines when you look at the effort and detail that was put into creating all music and audio tracks for the release. No game's opening musical score has ever captured my attention like this one. Civilization IV has a vast array of sounds for the ambient environment, building completion, diplomatic interactions…and the list goes on. Kudos also goes out to the developers for leaving the soundtracks in MP3 format. One of the crowing features of the game is also the narrative furnished by everyone's favourite Vulcan, Leonard Nimoy. Leonard does an amazing job of filling in the gaps by including a short quote for each complete technology, which is all the more fitting considering his role as Spock on the original Trek.

Overall, Civilization IV is a vast improvement over any other game in the Civilization series, and it can definitely stand on its own two feet (and then some). Outstanding graphics and stellar musical depth only add to an already amazing gaming experience.