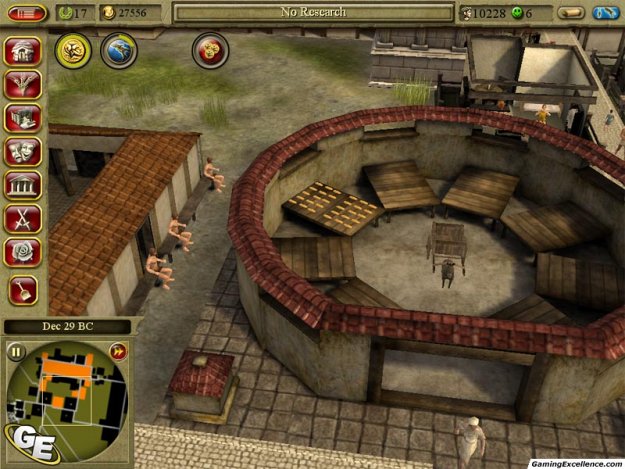 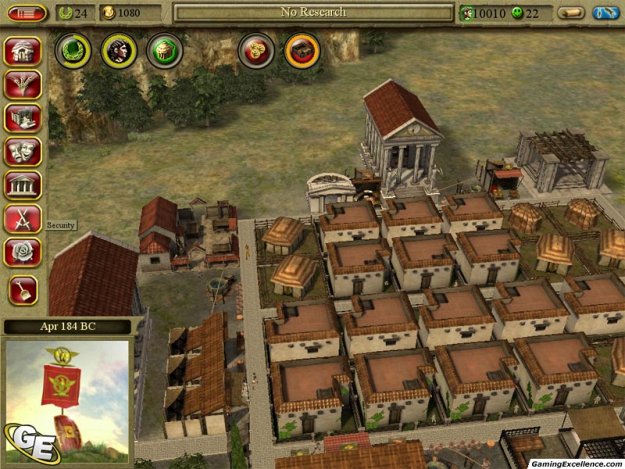 This is really just a standard city building game. It's set in the ancient Roman Empire, and there is a technology tree (The "Civ" part I guess.)

Build homes, farms, workshops, shops, entertainment, temples, barracks and lay down roads. That's pretty much the game. There is a simplistic combat and trade system but the meat of the game is building the infrastructure to ensure your city runs like an efficient machine, collecting resources, and more importantly, taxes.

The graphics are simple and low resolution. Your cities will be filled with jagged little polygons and untextured shapes. There is very little sound in-game and your citizens only have about five different things to say.

The mission tutorials are far more verbose and occasionally feature some stiff looking computer generated animation. After you are taught the basics of building, you can choose to play through one of the two campaign paths as either a military or civilian governor. The only difference is that the military campaign allows you to build a small army and experience the simple combat in the game.

Combat systems do not get any more simple than CivCity Rome's. You can either recruit soldiers with swords, or you can have them throw javelins. After you have selected which weapons they will wield the barracks will automatically build troops provided your city keeps up with the production of weapons. After that it's point and click on the enemy and you either win or lose.

The trading system is similarly limited. Once spending cash to open a trade route to another city, simply select a good you wish to either buy or sell. Buying or selling different types of goods requires building additional markets or docks. I found it annoying that one ship could not drop off wood and while at its destination load up with grain for the journey home.

In the city proper, each house only holds one citizen, unless they get married in which case it holds two. Housing is one of the principal concerns in the game and taxes collected from your citizens are your principal source of revenue. If your expenses outstrip your income your treasury runs out and you loose the game. It is always in the players best interest to provide his housed citizens with luxuries like fresh meat, beds, and olive oil so that they make their houses nicer. The nicer the home, the more taxes you collect, the more money you can spend to provide your citizens with more luxuries. It is a vicious cycle that can keep you building and upgrading forever if nothing goes wrong.

Of course something always does go wrong, and the game isn't very good at warning you about it either. The warning that you granary is running low on food is followed, without fail two seconds later, with an alert that the granary is now empty.

Running out of food isn't the only problem governors will face. Large, prosperous, happy cities face the near crippling problem of unemployment. Happy cities where all citizens are employed and enjoy lavish luxuries attract migrants to your city. Arriving and finding no jobs in your perfectly sufficient city, these vagrants begin to drag down the happiness of your city.

As city happiness falls, perfectly good and employed citizens begin to leave the city citing lack of jobs as the reason they are so unhappy. Frantically trying to keep people in your city, you decide to increase the food ration. Unfortunately you are warned too late that your granary does not have that much food! Now your people are unhappy about the lack of food on top of the unemployment problem.

Now in a panic as people begin to abandon your city you increase work hours in an effort to refill the city granary before the food situation gets even more desperate. Working longer hours also makes citizens unhappy. Having exhausted two of your options to manage city happiness, rations and work hours, your last resort is to raise your citizens pay. Hopefully your taxes from your citizens homes can cover this expenditure, otherwise soon your treasury will be as empty as your granary and your game is over.

Once you figure out how to construct a good tax generating neighborhood, the game becomes almost too easy. With a nearly unending amount of taxes rolling in you will be able to build and spend as you please. With unlimited funds at your disposal you are free to create efficient roadways to speed your citizens to work and play and research a few of the perks along the technology tree.

A basic city building game is joined with simple combat, trading, and research. CivCity Rome is very plain and not very fun to play.