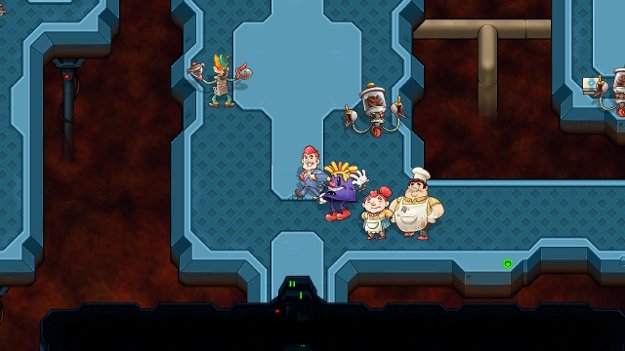 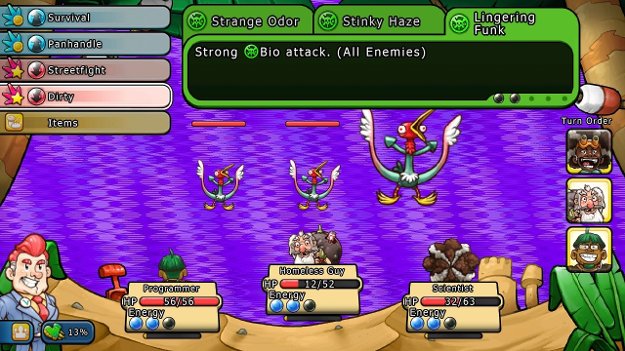 Citizens of Earth is a peculiar RPG, unlike anything I had seen since playing Earthbound many years ago (which is clear, given how much the classic Super Nintendo RPG has clearly influenced this title). In it, you're the newly-elected Vice President of Earth, but things immediately go awry as you must face off against protestors, coffee-store managers, and peculiar creatures that have all started running amok in the world, hinting at something of a more sinister plot.

'Sinister', in this case, is all relative, as Citizens of Earth - or at least each of its characters - takes a very lassez-faire approach to the problems facing the world. The game is very light in tone, which is reflected everything from the dialogue to the enemy design, to the way you can face the numerous quests available for you to pursue. From the moment you complete your first required objective in the game, you're essentially given free reign of the world, allowing you to discover everything and everyone at your own pace, giving you complete freedom in how you want to play the game. 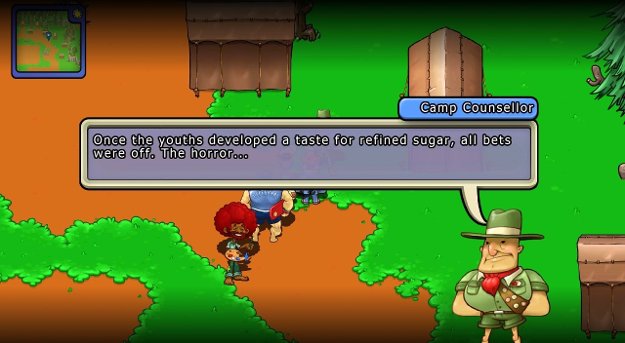 See, the crux of the gameplay isn't moving the plot forward, like most RPGs. Of course, if you want you can make a beeline to the next place you need to be, but much of the game consists of recruiting the titular Citizens of Earth - you see, you, as the VP, don't do any fighting, it's these citizens (named simply 'Cop', or 'Yoga Instructor', or 'Brother') that do it for you. They're the ones who battle, level up, equip items, get new abilities, and take on tougher and tougher opponents for you to take down. Your job is to complete a quest for each of them so that they'll join your team.

These quests range from the simple - paying out some money; to the complex - like finding a bevy of missing cats scattered around the world; to the downright obnoxious - leveling up every character you've recruited to a particular threshold. Each citizen is different in every way, whether its how you get them into your party, how they fight, or what their talent is. It's this talent that'll likely entice you most of all, as some citizens give you the ability to discover new areas, rearrange your characters' stats, purchase new pieces of equipment, change the game's difficulty, and more. And many of them can level up this talent, letting you do more with it as you explore the world.

This freedom, to go around the world at your leisure, is one of the game's strengths, but also one of its weaknesses. It's really easy to lose the plot, to forget what you were doing and why, and in addition it's really easy to walk into an area and have no idea how strong anything around you is. This is exacerbated by the wildly varying strengths of the citizens, and I'm not just talking about the fact that they all level up individually. Some citizens are simply not as useful in combat as others. 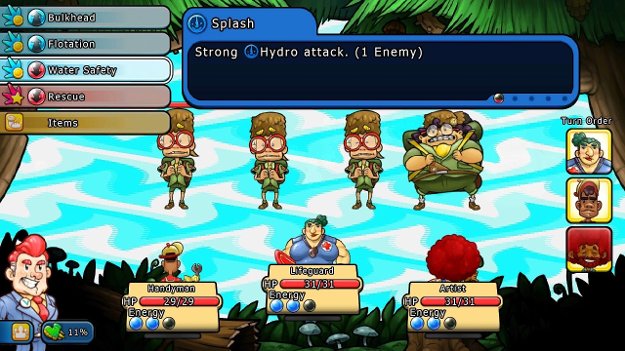 Combat is one of the game's weak points...which is unfortunate for a turn-based RPG. It's fairly simple - everyone goes in order, executing moves you pick for them - some moves give the character energy, and some moves (the stronger ones) consume it. It sounds like it could lead to mechanically complex strategies, but the number of citizens, each with different movesets, doesn't really allow for this. All this means is that you'll be finding a group of citizens that have decent attacks that give energy, and repeatedly using those citizens and abilities in combat, sometimes venturing to the energy-draining moves when necessary. The game does feature an instant-win to battles, activated if you face an enemy well before your level, but this doesn't happen often enough, and so much of the time you'll just be repeating battle after battle monotonously.

It's hard to call Citizens of Earth a bad game, per se. It's got a lot of thought put into the wide array of characters, all the different, unique moves for each of them, the variety of quests available, and the large world to explore at your leisure. The problem is that, while the game is good stylistically, it falters mechanically - balance, pacing, and some minor technical issues get in the way of what could've been a much better experience. It's decent fun, but don't expect anything particularly deep out of this pool of voters.