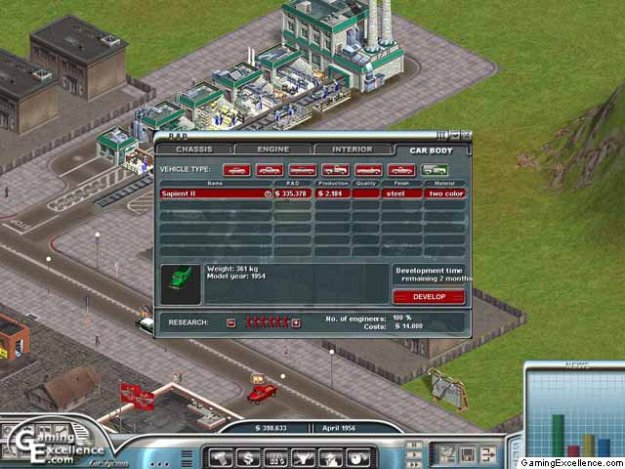 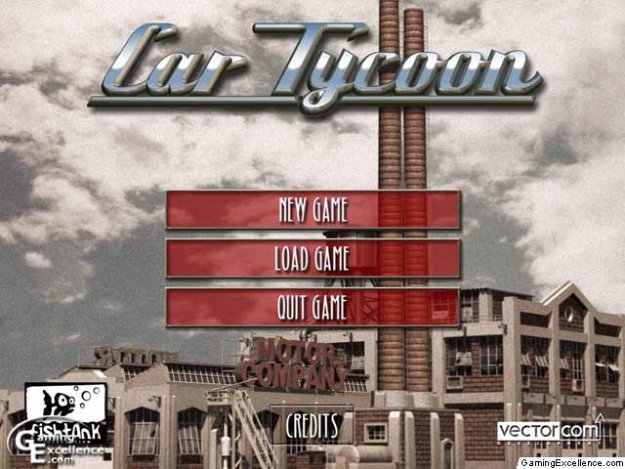 The multi-billion dollar automobile industry is a popular subject for discussion in today's economy. Rarely does it fail as we all need a form of transportation, but this wasn't always true. Back in the 1950's and 60's, the competition between automobile companies was much more fierce than it is today, and Car Tycoon allows you to go back to that era and relive the experience.

Published by Fishtank Interactive, a division of Ravensburger Interactive Media GmbH, and developed by German based Vectorcom Development, Car Tycoon takes the popular tycoon model of games and adds a new twist. You are in charge of an automobile company with a large budget and a few ideas.

Car Tycoon features a wide selection of scenarios and an option for unrestricted play from 1950 onwards. The general premise is simple, you are the owner of a major automobile corporation, and must develop, deploy, and repair a wide range of vehicles. This process begins with development and customization, where you put together the foundation of the vehicle and begin mass production. Unfortunately, this is where the problems begin.

Developing vehicles is simple, a little too simple. Vehicle customization is very limited, besides selecting from four fields of components. The vehicle color is not editable, and the cars, although stated otherwise in the manual, cannot be renamed. When attempting to rename a car or truck, the name remains stuck at "new car" and cannot be edited. This is only the first of a variety of bugs that will crop up later on in the game.

After customizing the vehicle, mass production is the next step. You must assign a distribution pattern and decide which dealerships should carry this specific model. In most scenarios you only begin with a single dealership, and more can be bid on at a later date. You own these dealerships and therefore are responsible for running promotions and advertising the vehicles, anything to assist in sales. If your company owns a garage or two, players have the option to include an added bonus with vehicle purchases, such as a free set of tires or a guarantee from rust. Each of these options plays a critical role in the success of your company, and will lead you to fame and fortune or ruins.

Expansion can only be accomplished by bidding on new factories, dealerships, and garages when they become available. Unfortunately, these auctions can occur at any time during the game without warning, and usually you are not prepared in any way. Often, these auctions appear in the worst moments, when you are running low on cash or developing a new vehicle, and always interrupt play. The general concept behind this is solid, but a warning a few minutes before an auction is set to begin would be extremely beneficial.

Research and development is a key factor to success in Car Tycoon. You must fund a team of engineers to design components for your vehicles. Over time, customers will only want new technology, and unless you stay ahead in these fields, your competitors will have the leading edge in car sales. Subcontractors can be used to develop these new parts, and although the costs of development are much higher, the process is done in a much shorter timeframe.

Another good aspect of Car Tycoon is the ability to use espionage and sabotage to affect the performance of your competitors. Players are able to select from one of four spies to either gain information on a company such as current status and car development, or sabotage them by shutting down production or discontinuing their advertising measures. Unfortunately, a response from these attempts at obtaining information are only received if the spy is successful, and if they fail in the mission, you will not hear anything from the game, a simple "failure" message would be better than nothing. Generally, this feature is well done, but a few additions would greatly improve it.

Car Tycoon is a very simple game in one respect, but a lack of proper documentation is a major issue and was overlooked by the developers. Many features included in Car Tycoon are completely undocumented or explained in little detail. The stock market aspect is a good example of this. Car Tycoon offers players the ability to purchase shares of other companies using the built-in stock market system. The tutorial briefly explains how purchasing is accomplished, but does not mention why it is beneficial to use this feature or why it is used in the first place, nor does it mention any relevance to the title. Offers can be made for large orders of cars or trucks for local businesses, but nothing is mentioned of this in the tutorial whatsoever. Upon making an offer at one of these contacts, no matter how good, you never seem to obtain a response from the company in question. By clicking on a local business or vehicle, several facts on the subject are given, one of which is income. How these facts influence the gameplay has yet to be discovered, as nothing of relevance is mentioned in the documentation.

As a financial management title, one would expect a wide variety of charts and graphs full of data on your company, but unfortunately, this is another area where Car Tycoon is lacking. Only a few minor charts are available, making it very difficult to understand how well your company is doing, and what actions will be needed to operate a successful business. The only detailed summary on your company's performance is the year-end review, and that is difficult to base any real-time decisions off of. All in all, the basic gameplay is entertaining, but for any guru whom looks towards the financial wing of the tycoon series of games, you will be greatly disappointed in Car Tycoon.

Stability is a major problem in Car Tycoon, unfortunately to the point where it affects the entire game in a negative manner. This game is riddled with bugs, crash after crash. While using any Windows operating system, upon exiting the game this operating system crashes every time due to a fatal exception within the application. It is a real shame that a game of Car Tycoon's capabilities has so many bugs, so many that it would take some sort of "super patch" to repair the problems.

Not all is of loss in Car Tycoon. The graphics presented in the game, although using a 2D engine, are quite detailed and generally have a good feel. The large play area with multiple towns on one map is another good aspect. The ability to zoom has been included as well, but this simply increases the size of the objects, making them extremely pixilated.

Along with the graphics, the sound is definitely the best aspect of Car Tycoon. Catchy 1950's and 60's tunes and a wide array of in-game sound effects are extremely relevant and well done, fitting in perfectly with the time frame presented.

Generally, the game is entertaining in some respect, as it is simple and can be played by nearly anyone. If you can get past the many flaws and bugs, then it is possible to have a good experience with the game. Unfortunately, an exit routine that not only crashes the program but the entire operating system can become somewhat bothersome.

Car Tycoon had the potential to be a very well rounded addition to the Tycoon series of games. Unfortunately, it stops short of a full-blown tycoon game as the financial aspect is too simplistic, and very few options are available. The numerous crash bugs kill the game and greatly reduce the replay value of the title. If you are a diehard automobile fanatic or simply enjoy the tycoon series of games and own every rendition, then you may derive some entertainment from Car Tycoon, but until the problems are resolved, if they get resolved, Car Tycoon should be approached cautiously.