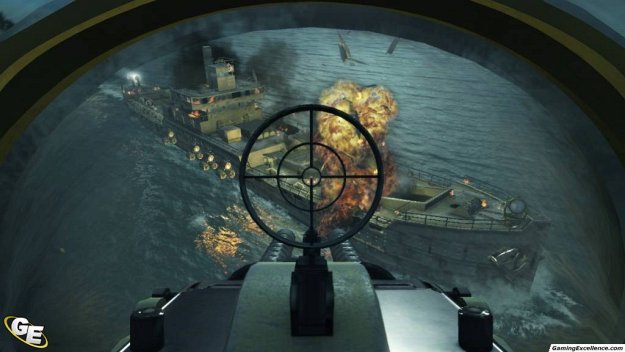 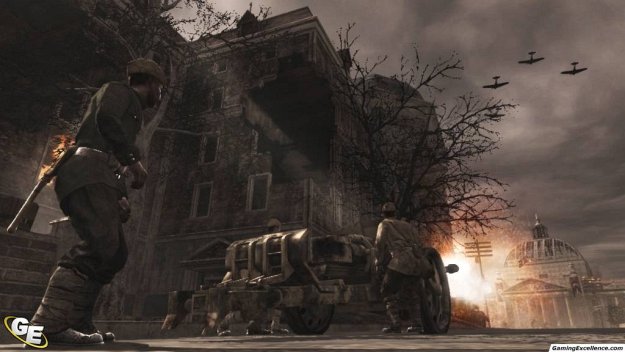 When Infinity Ward released Call of Duty 4: Modern Warfare back in 2007, the developer was met with critical acclaim and praise for breaking away from the World War II setting that had started to bog down the once revolutionary series. That made Treyarch's decision to bring the fifth installment back to the historical time period that much more confusing - why mess with success? Well, Call of Duty: World at War returns to the series' roots, and is a good reminder of why World War II games became so popular in the first place - the tone is gritty, the pace is frantic, and the action is visceral.

World at War's story is split between two very different fronts - the ferocious jungle campaign of the Pacific theatre, and the retaliatory invasion of the Russians on the Eastern front. That's right - no pesky Normandy invasions this time around! In the Pacific, you take on the role of Private Miller of the United States Marine Corps, and take part in the island hopping campaign towards Okinawa. On the Eastern Front, you play as Private Dimitri Petrenko, and are tasked with pushing the Nazis out of Russia and marching into Berlin. The campaign is paced exceptionally well so that after a few missions of fighting as Miller in the Pacific, you'll switch over to play as Dimitri in Eastern Europe. This stops the campaign from becoming stale, keeping it fresh and exciting.

Perhaps the best part of the campaign is the sheer amount of variety found in the missions. The first mission as Private Petrenko, for example, comes straight out of the movie Enemy at the Gates. Narrowly surviving a massacre in Nazi controlled Stalingrad, you and an injured comrade have to make your way through the enemy filled streets armed with only a sniper rifle in order to assassinate the German General. In addition to sniper duels, you'll also have to burn out enemy fortifications during the campaign, as well as command a tank through enemy infested Germany.

One of the most memorable missions has you playing as neither Miller nor Petrenko, but Petty Officer Locke, a gunner for a PBY Catalina flying boat. In addition to shooting down Japanese patrol boats, merchant ships, and fighter planes, you'll have to try and rescue American sailors stranded in the sea after their fleet is decimated by a squadron of kamikaze fighters. The mission is really unique, and the intensity ramps up significantly as more Japanese planes show up, and ammo starts becoming scarce. The first person views of the plane's interior as well as the exceptional dialogue make this mission much more than a standard rail shooting experience.

Although it is overall an invigorating experience, the campaign does have a few faults - most notably, some annoying glitches. For example, in order to finish one mission, you have to regroup with your squad. The mission won't end, however, until you backtrack half way through the level and unstick one of your AI buddies with a grenade - something that obviously shouldn't make into the finished product. There are a few other minor glitches as well, such as the little grenade symbol by your feet sometimes staying on screen long after its explosion, but these usually don't have an effect on the gameplay, and are thus easily ignorable.

As great as the campaign is alone, it's even greater with a few friends. World at War allows you to play through the entire campaign with up to three friends, and you can even turn on competitive scoring, much like in Halo 3, to add a new layer of depth when playing with friends. The other new co-operative mode in World at War is the ever-addictive Nazi Zombies. With a few friends, you get to fight off a never-ending horde of Nazi Zombies, starting off with just a pistol. As the game continues, and the waves get progressively harder and harder, new guns are available to purchase. It's hectic and crazy, and although no Left 4 Dead, it is a heck of a lot of fun. New Zombie maps are also being released, which are introducing new features such as Japanese Zombies, undead dogs, and environmental traps.

If Nazi Zombies isn't your thing, then you might find World at War's multiplayer more enjoyable. Treyarch took the super addictive multiplayer system from Modern Warfare, and it still is great. Classes, perks, prestige classes - it's all here. Of course, some of the technology present in Call of Duty 4 wasn't around back in the 1940's, so Treyarch did have to make a few, slight changes. For example, instead of being able to call in Helicopters after getting a killing streak, you can bring in attack dogs to attack your foes, or call in artillery strikes to bombard enemy positions. The essentials are all the same however. You get experience points for killing enemies and winning matches, which can be used to unlock new, powerful guns, weapon accessories and armor, and better perks. The prestige class returns as well, allowing you to return to level 1 after reaching the maximum level. You can do this up to 10 times, so if you are dedicated in getting to the top, be prepared to put a lot of hours in World at War. However, with all of the various match types such as team deathmatch and capture the flag, and the level of customization found in the class system, you won't be hard pressed for a reason to play.

The graphics in World at War are stunning, with dazzling explosions lighting up the screen and individual character models looking impressively detailed, especially up close, such as when a Banzai soldier jumps on you with a bayonet in your face. The animations are spectacular as well, with no two soldiers dying the same way. You can even blow off individual body parts off with certain weapons, like the shotgun, which is of course extremely satisfying. The game's audio also stands up extremely well. The game features big name voice talent such as Kiefer Sutherland and Gary Oldman, and the soundtrack is immersive and fitting. The guns sound realistic and appropriately powerful - you can even hear the sounds of sizzling flesh after burning enemies with the flamethrower. If that sound doesn't draw you into the war, I'm not sure if anything will.

In the end, Call of Duty: World at War is a bit of an odd duck. It combines the new, successful multiplayer system of Modern Warfare with the old, familiar setting of World War II. Though WWII games are a dime a dozen, Call of Duty is still at the top for a reason. The campaign is varied and exciting, and can be played with up to three friends. The multiplayer is deep and addictive, and the new Nazi Zombie mode is surprisingly entertaining. The only major obstacle to enjoying this game for some is probably the setting. If you're absolutely sick of World War II, then you might end up forcing yourself not to enjoy this game. However, if you're a fan of first person shooters in the least, then World at War will provide an enthralling experience that will easily last until the next Call of Duty.