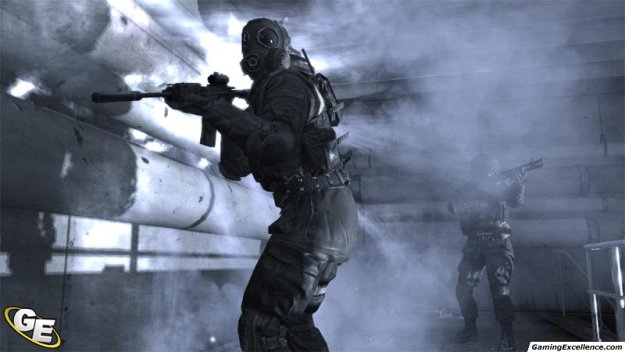 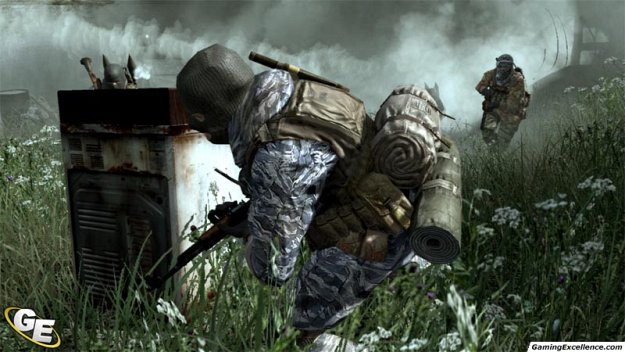 The Call of Duty series has long been set in the theatre of World War II. The fourth instalment seeks to change this and alter the formula by taking place in modern times, where the good and bad guys are harder to define, the weapons are more powerful, and the plot is more complicated than just pushing back the Third Reich. The result is a game that is fun to play, whether alone or with others, and that sets a new benchmark for FPS games.

The game is neatly divided into two parts: single player, and multiplayer, with more than just human opponents differentiating the two modes. The single player charts the progress of the United States Marine Corps and the Special Air Services, the British equivalent, via a combatant in each. The story is short, and at a comfortable difficulty level, should take no more than half a dozen hours or so. But that's not to say it's lacking in content - on the contrary, the single player experience is intense and filled with memorable sequences and scenes. It's definitely worth playing through at least once.

The AI in the single player game is done quite well, for both the enemies and your teammates. Your teammates will stay behind cover, poking their head out to fire at the enemies, toss grenades, follow behind you when you proceed, and in general do a good job of being teammates. A little bit more fire from them would've been appreciated, though. The enemy does the same thing, hiding from your shots and tossing grenades, but they do it a little too well.

The enemy's AI, especially on the higher difficulties, borders on the ludicrous side of unfair, as they'll be able to do amazing tasks that even the best sniper couldn't. Throwing grenades a hundred feet with perfect accuracy, taking you out with three shots from an AK-47 while completely out of your view (even with a sniper rifle's scope), and even firing on you the instant you turn corners, as if they already knew you were coming. At some points, it's possible to be aiming at a doorway with a raised rifle for the enemy to appear, only to have them come through, raise their weapon, fire a couple shots, and kill you immediately, all before you could even fire once. There's a difference between a fair difficulty and a frustrating one, and COD4 definitely tends to the latter.

Buying this game for the single player experience alone, however, would mean you were missing out on the bulk of the content. The multiplayer of Call of Duty 4 holds an inordinate amount of fun in it, introducing new elements and ideas that make it fresh, fun, and worth replaying again and again.

The multiplayer has a variety of modes for you to play through. There's the standard deathmatch and team deathmatch, where in the PC version, entering a game with nearly fifty players can mean staying alive for half a dozen seconds before someone finds you and shoots you. Other modes include Headquarters, where two opposing teams must capture a single point on the map (the HQ) and hold it for as long as they can to rack up points. In Sabotage, your team must find a bomb and use it to blow apart a target. On their own, the multiplayer modes are pretty fun, but they're nothing really new.

The Class system of COD4 is the first thing that adds some variety into the mix. Initially, you get to select one of a few pre-made classes, each with a specific primary weapon, secondary weapon, attachments and delightful little enhancements called 'perks'. These perks further flesh out your character by allowing him to do such things as hold extra grenades, take more damage (or dish it out), and sprint for longer distances. At first, there's not a whole lot unlocked: the weapons are mediocre, the perks average at best, and there isn't too much variety. But that's not all…

Where the game really gets interesting is the ability to earn experience points as you complete objectives and defeat other players. Earn enough experience and you'll move up in rank, which means unlocking features, weapons, attachments, classes, perks, and challenges (more on those in a bit). The real point of interest is unlocking the Create-a-Class feature, which allows you to invent your own class with its own weapons, perks, and so forth. As more perks and better weapons get unlocked, you'll find yourself not so helpless anymore, as your jerky, one-shot sniper rifle is replaced by a semi-automatic, your dusty handgun is replaced by a desert eagle, and your perks include such interesting abilities as the chance to take out your handgun as you lay dying and fire a few final shots at your killer, or dropping a live grenade when you die.

Challenges add yet another reason to play multiplayer. As your increase your rank, you'll unlock challenges for each weapon that, upon completion, grant you attachments and extras for that particular weapon. Additionally, there are challenges that don't involve specific tools, such as leaping and falling to your death, killing a certain number of enemies while crouching/prone, or shooting down a helicopter (these, however, just grant you extra experience).

Overall, the multiplayer experience of Call of Duty 4 is astounding, and probably worth the price of the game by itself, as long as you don't mind playing with others. A big issue with it, however, seems to be that once you reach level 55 on the PC version, you can't proceed any further and that somewhat tempers the experience as a whole. Another caveat is that, while Xbox 360 and PlayStation 3 players get to keep their player profiles stored online, the PC gamers don't. What this means is that if you play the game from another computer, the work you've done building up your character and customizing classes is all gone, which can be very irritating. Other than this, however, the multiplayer portion as a whole is very well done.

The single player shouldn't get left in the dust, as it offers a realistic wartime scenario that'll draw you in with its excellent voice acting, musical track, and cinematic experience that begins right from the first level and doesn't let up. In particular, the escalating climax near the middle of the game was something unlike anything I had ever seen in a video game before, and it just took my breath away.

The graphics of the game are nothing to scoff at either. If your gaming computer can run the maximum settings, the game looks quite stunning. Animations are fluid and natural, facial expressions are conveyed excellently, and the world looks crisp and natural, from the war-ravaged Middle-Eastern cities to the quiet Russian countryside.

Call of Duty 4 is an excellent game, there's really no doubt about it. Top-notch presentation combined with tight gameplay and impressive graphics make it fun to play on the single-player, but it's in the multiplayer aspect of the game that the experience is the best. As far as first-person shooters go, this is one of the best on the market, and is something anyone that's sure to interest anyone who has dabbled in the genre.