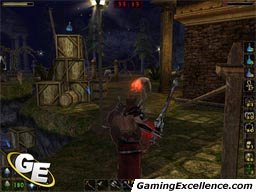 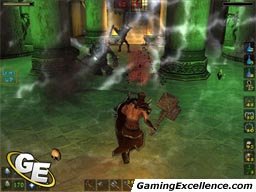 Games have evolved over the last twenty years, and not just in terms of graphical detail, or how many particles can be independently rendered. This is referring to gradual changes in the core gameplay of video games. Way back in the days of the NES, we as gamers were content to run across and screen with no other purpose or reason than to reach the other side, collecting coins, tokens, strawberries, or lima beans along the way.

But things have changed since then; games have evolved, and have found a sense of depth that wasn't present in the majority of the previous titles. Elements have been added to games nowadays that make them distinguishable from games from yesteryear, and while some classics are still fun to pick up and give a whirl, for the most part, gaming as a whole has moved on.

Then there is Call For Heroes: Pompolic Wars on the PC. At first it wasn't apparent why the game was unenjoyable. Sure, there was the poor appearance, limiting ability system, poor gameplay, and a host of other problems, but that wasn't it. Those are easy to spot, but there was something more. Then, fingers were snapped and light bulbs were lit above heads.

This game is old, dated, archaic, and dinosaur-ish if you will, in almost every way, and that's what's wrong.

Let me start from the beginning, from the story of the game. It is a tale of a great demon invading the world, sending his minions forth in the form of 'dark souls' that infect humanity's mind and enslave them all. As is often in cases like this, there is a hope of a single warrior that can come forth, capture the dark souls, and free all of civilization. It's not a terrible story, and to be sure, worst tales have been told in the form of narrative. It would be nice if the game would actually tell you the story, though. The entire tale you've just read is right from the instruction book, and doesn't appear anywhere in the actual game.

You're given a choice between two characters: the melee-heavy warrior, and the range-specific amazon. Not the most stunning range of choices. Besides affecting the range at which you'll be attacking enemies, each character will find different weapons and use different abilities.

The weapon system in Pompolic Wars is one of the first issues I've found with the game. Throughout the levels of the game, your character will be able to pick up weapons, and can switch between them to kill bad guys. For the most part, they're identical, so the warrior might be able to beat a skeleton down with an axe, or use a slightly more powerful tri-mace, but there are a couple weapons that add a different style of attack, though not enough to add any real variety. As you use a particular weapon, skill in that weapon rises, and it will level up, dealing critical attacks and fatal hits more often. It also sometimes unlocks alternate attacks, though this is a little dubious, as the game has both prohibited me from using an attack until I level up a weapon and let me use the attack, both at the same weapon level. Each weapon also requires mana to use at all (there are two varieties, green and blue mana), and acts like ammo, even for melee weapons, which was very frustrating.

The abilities system is one of the most frustrating I've seen in a while. As stated before, as you level up, you gain abilities, each of which fit into one of three categories: Might, Defense, and Ice. Fire and Lightning took a pass on this one. So once you've learned your skill, it requires stamina to use (stamina is also required to run, but almost never runs out unless you're running non-stop for ten minutes or so). Unfortunately, and this is the bad part, spells also require 'icons' of their respective category to use, items that are picked up around the levels in certain locations. To use a might-based skill, for example, requires and consumes one might icon. Since there are a limited number of these icons scattered around the various levels, the abilities are severely handicapped. Were they something impressive, this may justify the high cost to use them, but they're not, and their benefit does not warrant the limited use they have.

The actual objective of the game involves collecting the dark souls mentioned before in the anaemic storyline. Each level is essentially a scavenger hunt for a certain number of these dark souls (which look just like flashy skulls) before you can reach a teleporter to exit the stage. This objective is not terribly exciting. For some reason, the developers have also decided to put a time limit on each level you go through. The gameplay around this timed hunt is as hack-and-slash as any game before it. It involves running around, finding enemies, killing enemies, and running around some more. Death is met with having to restart the entire level or, if special respawn items have been collected, merely teleporting back to the beginning of the level at the cost of one of these items.

The levels themselves aren't set up in any logical manner, and look more like deathmatch arenas from some nameless first-person shooter. Many of them are poorly designed. For example, one particular level had a moat around the level. Falling into the moat was not fatal, but the tedium at trying to find a way out of the water was. The fact that the jumping mechanic is near-worthless does not help, as jumping over a pit is more often met with falling to death than success, even for the smallest-looking gaps. The levels don't really have any connection to, well, anything, least of all each other. In one level you'll find yourself in a snow-covered village, the next takes place over a pit of fiery lava, while the next still is set in some ruins in a desert. And none of them are particularly enjoyable.

There is even the inclusion of some very mild RPG elements. When you gain enough experience points from killing your foes, your hero levels up. With this comes the ability to either increase health, armor, or attack. This happens so rarely (about once ever two or three stages) that it feels inconsequential and any actual change is unnoticeable since, even after levelling up, the enemies that are being fought at that point are just as powerful in relation to you as the previous enemies were at a lower experience level.

Overall, Call For Heroes isn't just a bad game. It isn't just boring because it's mindless. Hack and slash games have their audience as well, and there are some great games on the market that require no thought to play while the hero swings and cuts his way through throngs of sword fodder. No, it's not just a bad game. The problem with this title is that it embodies a torrent of design concepts that the rest of the industry decided to eschew in favour of more enjoyable models. Even the graphics feel like something from a decade ago, when the third dimension was something new on the computer screen.

There are games that evoke nostalgia, and there are games that just feel old. Call For Heroes: Pompolic Wars, feels too much like the latter, and has a myriad of problems associated with its core gameplay that make it tough to play, and even harder to enjoy.