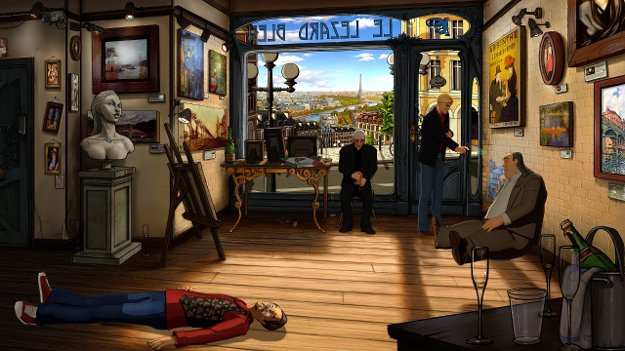 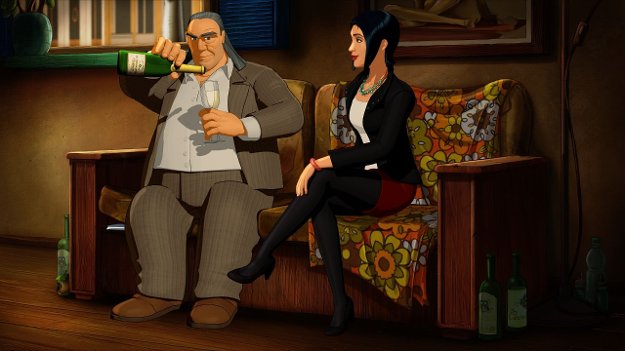 Broken Sword 5 is a continuation of a long going point and click series, infamous of course for the infernal G-O-A-T puzzle. And guess who makes a special appearance in this installment? I won't say, but you can probably guess. This series continues in the long tradition of point and click adventures by dropping you right into the middle of the action and giving you lots of logic and brain tickling puzzles and dragging you along to solve them as best you can. Broken Sword does a pretty good job of doing it with an interesting setting and beautiful backdrop to help it along along with well potrayed characters, which helps bring the entire story to life.

You alternate between playing series stand ins George Stobbard and Nico Collard as they try to solve the murder of a man from an art exhibit. George immediately thinks there's something fishy about his murder, all as it relates to a strange painting called "la Malediccio." Both characters have their own unique personality quirks that they bring to the table as they talk to the supporting Parisian and European casts as they gather clues to try to solve the murder and discover what's really going on. The further they get and the more clues they dig up, the stranger the murder seems to get and the deeper the conspiracy seems to go. They end up having to travel further and further abroad to actually determine what's going on and solve the mystery and unravel everything that's going on. 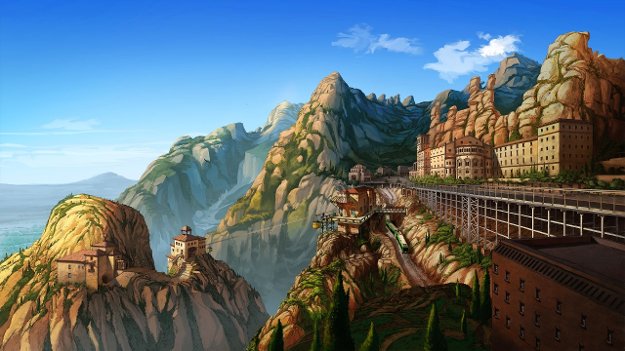 One of the best things about Broken Sword 5 is the beautifully drawn backgrounds. They're intricate and incredibly well detailed. The colors for all of them are bright and vivid and they look like someone took a lot of time and effort to put them together. They help draw you into the setting and help you imagine that you're in the character's world, which is a very good thing and very important when playing a game. Unfortunately, the intricate setting can also make it difficult to find what items can be interacted with a times. When you're in a room searching for clues, you're forced to drag the cursor over everything looking for what items are going to have a name pop up on them to show that they can be interacted with. It's like playing Visual Roulette and it's incredible distracting and takes away from the nice, imersive feeling they've got going. Borrowing from other games who have a reveal button would not have been a bad idea here. Considering how linear the game is and how you're eventually going to either have to figure everything out or fail anyway, it's not a bad idea to just show me where everything is and let me figure out how I have to use it.

Because let's face it, in a point and click, you pick up everything, interact with everything you can and figure it out as you go along. The difficulty is in figuring out how it makes sense. Broken Sword does a mostly decent job of the puzzles making sense and them being fairly solvable. It's not until the game progresses that the puzzles start to get a little weirder and more difficult, veering along the more familiar path of head scratching that those of us point and click fans are more used to dealing with. Why developers tend to do this us, I don't know. A good, steady pace would be nice for once. I don't know, maybe I'm asking too much.

But if you can push through, the story behind all the crazy puzzles is fairly decent. It's fairly complex, well thought out and well developed with a lot of history behind it. Unfortunately there were times when the gameplay itself was moving so slowly and dealing with the characters themselves was going so slowly that I found myself getting a little bored. To be fair to the game, there was quite a bit of narration. And the voice acting was very well done and they obviously did a decent amount of work with it. There were good jokes and many of the characters were actually engaging. It's just that the slow moments were so slow I found myself really having to push through to care enough to finish some of the puzzles I was trying to solve to get to the next part of the story.

Overall, Broken Sword 5 is a very solid game with a great story and pretty solid gameplay. It had some slow moments and some times when the puzzles made me grind my teeth and want to smash my fist into the computer monitor, but honestly what point and click doesn't? It wasn't extreme enough to drive me to the point of madness. I'd definitely recommend this beautifully put together game to others; I'd just suggest that you prepare for the slow sections along with the expected difficult ones.