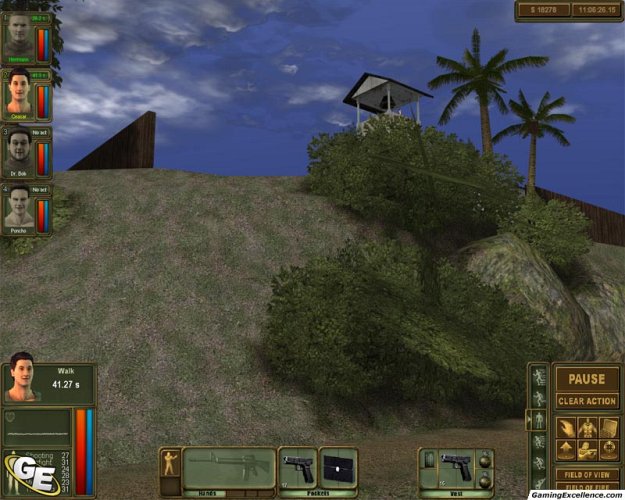 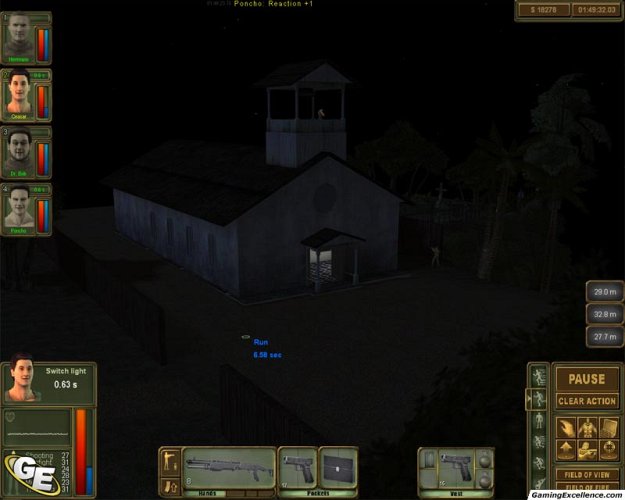 Welcome to Palinero, the land of graphical glitches and bad translations. Published by Strategy First and developed by Apeiron, Brigade E5 is severely lacking in polish. Presenting tired concepts in a cliche storyline, don't hold your breath for any surprising plot twists. In fact, there's so little to this game that doesn't deserve much attention at all.

In Brigade, you get to play as an apparently deadbeat con overdosing on steroids. You can pick one of six characters, and you're then asked a series of questions to "customize your experience" but the outcome always seems to be the same. If you manage to get through that unending quiz, you'll be treated to a fairly nice intro cut-scene which is likely going to bring your hopes up. Don't get too enthusiastic: this game's appeal starts declining again as soon as the video ends. The single-player campaign starts with an unknown army general bribing you with freedom in exchange for sending you to your death. You're thus thrown into the tri-sided war of an unknown tropical square of land in some international effort to qualm the daily skirmishes. In a "shocking" twist, your escort is killed by a landmine upon entry to the state, leaving you free to roam within its borders, performing a variety of jobs for anyone willing to put their money where their mouth is. While a clever marketing strategy has deemed this "non-linear storyline" to be a feature, the simplicity of the context speaks volumes of the laziness of the developers rather than their ingenuity. In fact, the only element of evolution of the story, hinted at in the game manual, has yet to appear after 40+ hours of gameplay. The game seems centered on the acquisition of wealth, a quest which rapidly becomes fruitless once you've got suitable weapons. I can't imagine anyone would play the single-player mode twice and if you think the multiplayer mode will save the day, the constant pausing will rapidly change your mind.

Learning how to play Brigade is about as fun as hitting your head against a rock. The manual is completely useless as it doesn't tell you how to do anything and it describes a variety of items without telling you how to use them. You might think it fortunate that the game is, at the very least, equipped with a tutorial. Once again, Brigade fails to provide complete information by training you to use weapons you're not able to afford until late in the game and carelessly leaving out instructions on how to use essential items like first aid kits. To make matters worse, the tutorial's mission scripting doesn't function too well so restarting the tutorial a few times was necessary to get to the end of it. I'll let you imagine my reaction when I realized that I hadn't even started playing the game yet.

Playing Brigade feels like work rather than entertainment. Since the game will pause every time any one of your mercenaries completes a given action, finds a new enemy or loses sight of one, or even hears a suspicious noise, you have no choice but to micro-manage your squad. This constant pausing drastically slows the game's pace and will leave you begging for a "shoot at whomever's in range and stop bugging me" hotkey. Maybe I've just gotten lazy after playing numerous RTS games which have decided that that should be the standard action. The developers took a stab at such a function by providing a semi-hidden "shoot until killed" action (you have to magically figure out that holding the Alt key while assigning a target will do this) but it cancels itself as soon as anything of consequence happens. It seems to me like getting shot doesn't often change your mind about wanting to defend yourself. Brigade also features other attempts at giving your pawns some intelligence, none of which seem to work too well. My personal favourite is the "fast turn" move where your character should rapidly turn a corner with gun drawn. When the interface actually recognizes that you're pointing at the corner of an object, which isn't often, the manoeuvre frequently fails either by having your character turn around an entirely different corner or turn successfully but facing in the opposite direction, a miscalculation usually applauded with a bullet in the back of the head. I suspect that the developers realized that their game was absolutely frustrating because dying automatically queues the annoying endgame cinematic instead of asking you if you'd like to reload the last saved game.

It's a shame that the game turned out so poorly given that it seems to have been built on a fairly solid engine. Sadly, it's not the most efficient engine so you can expect considerable 'freezing' at the start of a battle while (I can only imagine) your enemies are assigned their orders. Every aspect of the game is regulated by a realistic physics engine, from the time required to walk to the other end of the map (though the ability to speed up time would have been nice) down to the various weapon characteristics and hit probabilities. The path-finding abilities of your characters is reasonable: they can find their way to most places but have a bit of trouble when changing floors in a building or when running into another character. The enemy AI is also decent in coordinating attacks and fanning out groups of enemies, but falls short of praises because they don't use obstacles as cover; they're just as happy lying down in the middle of the road as long as they get a good shot. By the time I could finally afford to buy a vehicle, I was saddened to discover that they weren't covered by their physics engine as they just sit where they've been left, which reduces their usefulness to oversized backpacks that get you from A to B a little faster.

Brigade's graphics certainly aren't revolutionary but are surprising considering the game's shortfalls. The environments are nicely crafted and varied, especially the architectural elements of the various towns you'll encounter. I must question their decision not to use a background image because the beautiful landscapes float on a giant square in a void. I'm guessing they couldn't get the backdrop to work well with shading, which would have looked ridiculous combined with the gorgeous day and night cycle effects. Every item in the game is modeled in 3D and changes your player's sprite when worn, held or used. Applying the day/night shading to the characters was thus abandoned, likely as a result of the astronomical amount of textures that would be required to render them. The explosions also look fairly realistic, as long you look at them in real-time, and any firepower will illuminate nearby objects.

With the engine and the AI done, the developers probably decided they had put enough effort into this game. I can only hope that they such an excuse for their horrible audio and localization work. The most annoying element in this game is that your characters find it necessary to make ridiculous comments every five minutes. To diffuse a tense situation, what could be better than your main character yelling out "fiend!" in a bad German accent? A secondary character yelling "I see you!" in a bad Polish accent, that's what! I strongly believe that they had their developers sub for the vocal talent since the accents of all characters are atrocious. To make matters worse, a third grader could have composed better sentences than the game's translator. In one instance, I've even encountered untranslated mission directives in Russian. To complete the awful trio, the background music is apparently composed of two very short looping tracks: MIDI-synthesized guitar for combats and birds chirping for the rest.

Don't get fooled by the marketing. While this game may look good in screenshots, it's an absolute bore. Their engine developers and AI script writers would be better off finding a job in a company that employs sound engineers that aren't doubling as janitors.