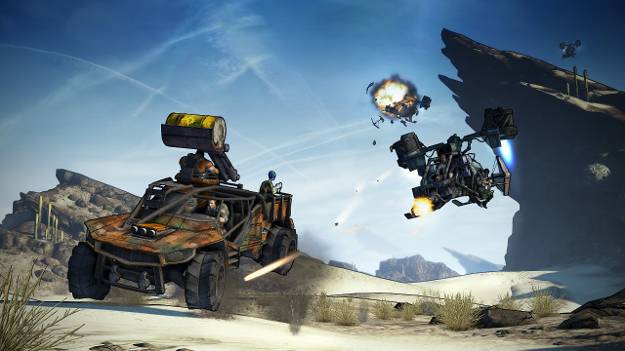 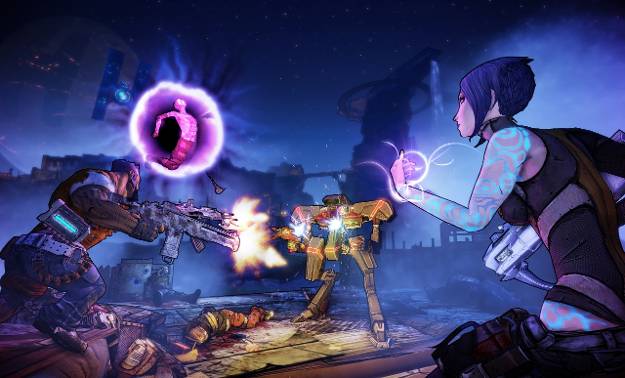 Welcome back to Pandora in Borderlands 2, 2K's sequel to the cell shaded shooter that brought the cutest dancing robot ever into our living rooms. If you don't know Claptrap, love Claptrap and belong to the Cult of Claptrap, then stop right now, buy the first game and fall in love with him. Please. Or we'll disown you.

During the hands on demo I got to play at E3, lovable Claptrap is indeed back and giving quest objectives, updates and witty remarks once again. The level I played was called Opportunity City and the mission was Statuesque. In it, Claptrap was directing my team to destroy statues in Opportunity City by using a deactivated robot that we had taken over.

Now, being that it was a demo, we were leveled straight up and given 20 skill points to distribute, which was awesome. My partner played Zero the Assassin and I played Salvador the Gunzerker, thinking that we might need some serious firepower to make our way through the level. Of course, when starting it up, I noticed that the game had the same graphical feel as the first, though vastly improved upon. The menus were sleeker looking and definitely caught the eye. But more importantly, the skills in the menu caught my attention the most. Some of the skill trees in the first Borderlands were questionable and I wasn't entirely sure how to level my character up. With Salvador, I had no problem. Every skill I saw of his was incredibly useful and relevant. They fleshed out his Gunzerker ability very nicely and I had an awesome time mowing enemies down.

The enemies gave as good as they got, though. Bluntly put, they are just as balls busting hard as they were in the first. It was awesome. Here I was, going in like a badass and thinking I was tough. I left wanting to cry home to my mommy, then jump back in for more. The enemies in Borderlands always give a good challenge, no matter how badass your character is, and they've continued it for this one. I will also say though, it was incredibly gratifying to have my grubby mitts on a nice corrosive weapon to hit the enemies with and I could see other interesting weapons dropping. As promised, there seems to be a whole lot more variety in the weapons available in the game. There was also a nice mix of soldiers and robot enemies in the game, giving some variety. 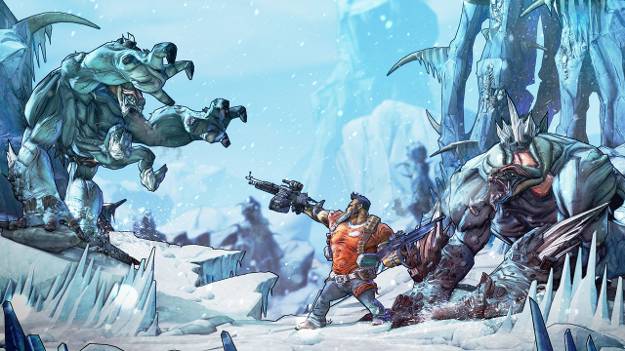 Of course, inevitably, I went down. It was kind of hard not to considering how huge some of the robot enemies were. However, when I went down I was still holding the left analog to move. And I started moving, while down and waiting for resurrection. That was a really nice add in that makes it so much easier to deal with the 'Fight for your Life' event. Now, I could slowly try to follow a weaker enemy around cover. Or likewise, I could move behind cover to make it easier for a teammate to get to me to revive my sorry butt.

The demo ended way too soon and they had to let the next group in, the bastards. I really didn't want to go and stop playing. I felt right at home jumping into the game, with the controls being basically the same. The updated graphics and skills were the major changes, along with what I've been promised is "a deeper story". I can't wait for the next Borderlands (and Claptrap!) to make their way into my hands. Welcome back to Pandora – get ready for a great fight. Skags!