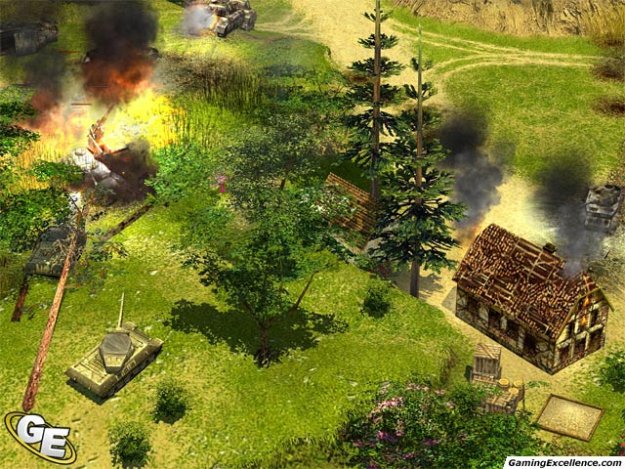 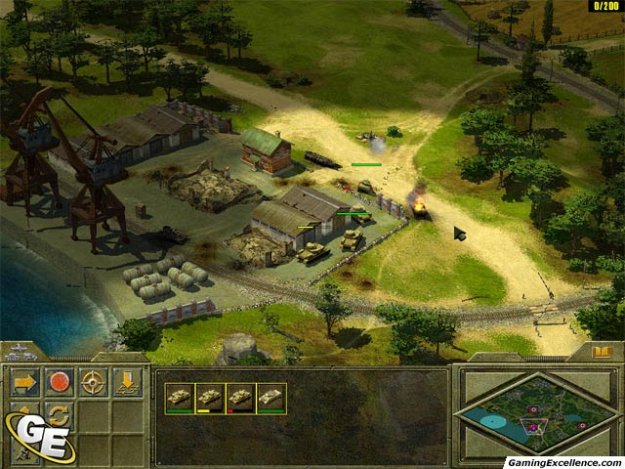 World War II real-time strategy games come a dime a dozen, this allows for a lot of competition in the genre. Sometimes you end up with top-of the line titles, other times they simply fall a bit short. Then there are titles like Blitzkrieg II, the sequel to CDV's release two years ago, which have a lot of potential but fail to fully utilize it.

Blitzkrieg 2 is one of those games that you'll come to both love and hate. On one side of the coin, the game has amazing quality graphics and sound with a really entertaining style of gameplay. On the flipside, the game is filled with enough bugs that you need to download the update right away before you start playing. Even after updating the game, it still has crash bugs that you'll find a nuisance. The game is a historical real time strategy game that takes place during the Second World War, and will have you take part in campaigns for the United States, Germany and the USSR. One of the highlights of the game is that all of the battles you participate in are as historically accurate as possible. On top of that, the units for all of the involved countries are designed to reflect the different types of units involved in the war, a true real-time simulation.

The campaign mode for Blitzkrieg 2 allows you to play as the Americans, Germans or the Russians. It doesn't really matter which country with which you begin; Germany will eventually be defeated as the end of the war approaches. Each country's story during the war is divided up into small campaigns, which contain about half a dozen missions plus one final mission that will complete the campaign before you move on. You don't have to beat every single mission in order to play the final one, but there are advantages for finishing the other missions. Before you pick a mission to play, you will be able to see what rewards are offered for completing it. These rewards vary from upgrading units, to being rewarded with a new type of unit. Each campaign is allotted a certain number of reserve points, which are divided up amongst the playable missions. The final mission will have all of the remaining reserve points available. This brings up an interesting dilemma. Do you finish an optional mission so that you can have a new unit? Or do you skip it so that you have more reserve points for the final mission and finish the campaign? These are the kinds of decisions that you will have to make between missions on the campaign map.

The campaign map is where you will be able to choose which mission you want to take on next. Any of the missions are playable except for the mission that will complete the campaign. This mission will have certain prerequisites that you have to meet before you can play it. In this mission you will use all of your remaining reserve points and have all of your available units ready for deployment. As I mentioned before, each mission has rewards for completing it, some missions will also allow you to use new types of units. These new units can have a significant effect on the final battle of the campaign, so it is usually worth finishing all of the missions while at the same time trying to minimize your losses.

Each type of unit can have a commander assigned to it. This commander does not actually participate in battles, but allows the unit type to increase in experience so that it can receive new abilities. Each type of unit has four different abilities that it can learn, that will significantly affect the gameplay. For example, one of the final abilities for the tank unit types is the ability to fire their canon while moving. This is an extremely powerful ability, as a moving target is a lot harder to hit than one that is not moving at all.

One of the things that I really liked about the game was the vast number of different unit models that can be found in the campaigns. It's not that there are a lot of different units, but each time a unit type is upgraded, the unit model changes to reflect the upgrade. This is one of those subtle things that not all gamers will pick up on right away. The changing models are only one of the ways that the game tries to stay as historically accurate as possible, while giving the best possible gaming experience.

The graphics in Blitzkrieg 2 are some of the best that I've seen for a real-time strategy game, perhaps with the exception of Age of Empires III. The unit and object models in the game are all completely three dimensional and are quite impressive. Fortunately, the developers have also taken the initiative as to prevent the camera from zooming in so far that the units lose their graphical flare. The camera can be rotated around the map and the vertical angle can be altered as well by holding down the mouse wheel. Zooming in and out is as simple as scrolling with the mouse wheel, like most other modern strategy games The in-game menus along with the main menus are all well designed and easy to use. The campaign map is well designed and really maintains simplicity while at the same time giving a WWII feeling to the campaign.

Not only are the graphics one of the game's strong points, but also they just wouldn't be quite as good without the sound effects and music to go with it. It is so fun to watch and listen as your bombers fly over your enemy and drop a payload onto their unprepared troops. The music in the game is excellent, as well when you are in the campaign map preparing for a mission. The music attempts to bring about a sense of the historical significance of WWII. You can hear this with the completion of each mission. The Americans have a short music score that sounds majestic but with power behind it; they sound like the good guys. The Germans, on the other hand, start off with a similar music score, but by the end it has turned into something sinister and foreboding. The German war machine was not something to be trifled with.

The gameplay for Blitzkrieg 2 is not your typical strategy game. You don't build a base, but instead attempt to control the checkpoints found around the map. These points are where your reinforcements will arrive when you use your reserve points. If you do not control one of these locations, you will not be able to call in any reserves, so it is best to control as many of these as possible. Each mission will give a variety of different objectives, some of which are secret objectives that you will find as you play the mission out. The missions vary from defending a hill, to assaulting a beachhead, to rescuing an intelligence officer behind enemy lines. The variety is so vast because the missions are all based off of historical battles. The game also comes with a map editor that lets you create your own custom missions and campaigns. This adds a lot of gameplay potential to the game and lets players create a variety of maps for multiplayer gaming.

One of the biggest issues with Blitzkrieg 2 isn't content, or gameplay, it's the technical issues that plague it. I've had the game crash in the campaign window. I've had it crash while paused in game. I've had it crash while playing the game. I've had the screen go black for a minute before being able to play again. And then it crashed again. These consistent problems greatly take away from overall experience, and even make the game feel so unplayable that it is necessary to download the patch before you start playing for the first time. Even afterwards, the game still crashes on me occasionally. I can't imagine the experience a player would have if they didn't have access to the internet.

Overall, Blitzkrieg 2 is a really very solid concept plagued by technical issues, a game that simply fails to utilize its full potential. The gameplay is fantastic, but when it comes down to dealing with these issues, the game loses its lustre. Hopefully over time the development team will be able to release bug fixes that will eliminate all of the crashing that gamers have been experiencing, but until then we'll have to live with what could have been a top-notch strategy title.