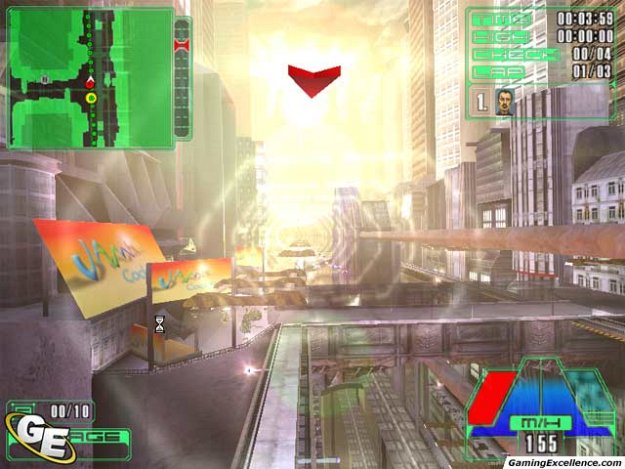 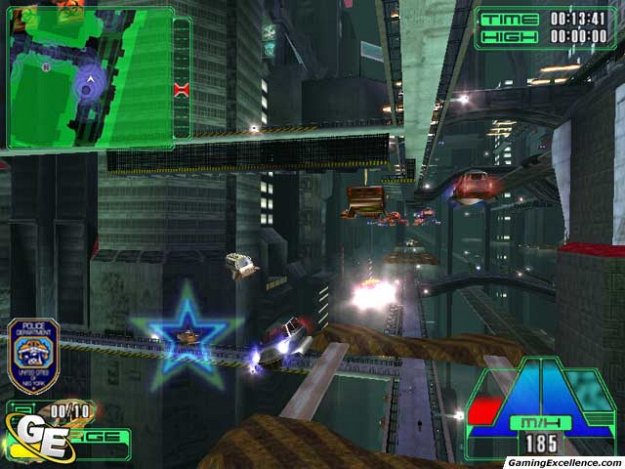 Imagine the future, driving in a world where vehicles fly through the air with six degrees of freedom, the ability to move up and down through three-dimensional space. Now, imagine dealing with several "layers" of traffic above and below your vehicle with the constant threat of the police chasing you down, and you'll finally begin to realize at this is not a traditional racing simulation. This is the world of Beam Breakers; a futuristic racing game set in the year 2173 that stretches the boundaries of the racing genre (not to mention the flight simulation genre) by mixing strategic missions with pure driving missions to deliver a unique gameplay experience.

Although most racing games are based on reality, mainly real-life event simulations, this game does not follow this path. Developed by Similis and published by JoWood Productions, Beam Breakers pushes the limits and falls into a different category. Not purely oriented on racing, the game explores flight and also crime based themes as the player completes missions dictated by the Beam Breakers gang's boss and attempts to avoid the ever-constant presence of the city police.

With that said, Beam Breakers certainly is not lacking in the game modes department. However, the quality of some of these is a completely different story. First up for new players are the basic tutorial missions. After this, come the basic missions, the main part of the game so to speak. The diversity here is appreciated, yet the early missions seem to offer nothing to keep players hooked. The game has boring, tedious tasks that are not typical of the genre, such as pizza delivery or vehicle destruction. Yeah, try ramming a vehicle in 3D space with the maneuverability of one of these futuristic vehicles while using a standard keyboard and dodging hundreds of other vehicles). Missions such as these are very unintuitive and do not seem to fit into the overall game at all. As the missions progress, upgrades are available for the vehicle and their quality improves, but this does not compensate for the slow start to the game.

Other modes available include championship mode, survival mode and observation mode. Championship mode provides a purely pleasurable, yet basic, racing experience, as you try to defeat opponents and work through the standings to come out on top. On the other hand, survival mode and observation mode do not fare so well. Survival mode provides frantic, fast-paced action as you attempt to out-run the cops for as long as possible. However, as the rounds only last for about a minute, it becomes boring pretty quick. Observation mode is simply a free-roam environment where a player can learn the controls or observe the scenery. And, as for multiplayer modes, the game is severely lacking. It only supports play on a local area network, which is not possible for most gamers. Online play would have been a huge asset to the title. Championship mode is by far the best part of the game. Without senseless tasks to bore the player, it truly demonstrates the areas in which Beam Breakers excels, in its new racing style and its exceptional graphics.

As for the latter of the two, there is no question that an extensive amount of time was spent perfecting the large city environments in which the game takes place. The vehicles are all highly detailed, as well as the buildings, balconies and other objects found in the background. The levels support hundreds of vehicles moving at once and people walking around the balconies and streets. Also, lighting effects are simply amazing. The sun shines and reflects off the windshield of the vehicle, causing a red-orange bright spot in the players view, and headlights are present on all vehicles, adding to the realism. The physics engine supports an interactive environment, where ordinary traffic will avoid an oncoming player's vehicle, street lamps and other objects break and collisions between vehicles are all noticeable. The only minor problems with the graphics of this game are that the color scheme of the environments is too bright and there are too many lighting effects when traffic density is set to high, distracting the player from the action and making visibility poor.

Unfortunately, Beam Breakers is not nearly as polished in the sound department. It has only one main track for the menu screens in and out of game, which becomes extremely repetitive after only a short while, and a very annoying voice for the mission briefings given in the game. As for sound effects, there are quiet and barely noticeable wind effects and traffic sounds. Breaking glass is hardly heard, and collisions with other traffic or buildings are also quite unnoticeable. Overall, the game has very low quality sound, something that could have been improved upon immensely.

The controls in Beam Breakers are very unforgiving. For the beginner, over-steering is all too easy, making it extremely difficult to avoid obstacles. At first, it seems as if there is no proper device to use to play the game. A racing wheel is simply out of the question, with its inability to move the vehicle up or down, and a joystick just does not have the functionality required. A keyboard or a gamepad seems to be the best solution, but although the controls are simple, they are very difficult to master for these futuristic vehicles. This can be directly attributed to the non-traditional vehicle movement.

Overall, Beam Breakers offers a different gameplay experience, with fast-paced action not restricted to the usual racing simulation. Its graphics are well done, but suffers from poor mission design which can turn players away all too soon. Time limits seem almost impossible and movement far from forgiving for the novice player. Sound effects are extremely poor and the game becomes extremely boring very quickly because of its repetitive nature. Although it was an attempt to offer something new to racing enthusiasts, it falls short of this goal without the fierce action found in other, more basic, racing games.