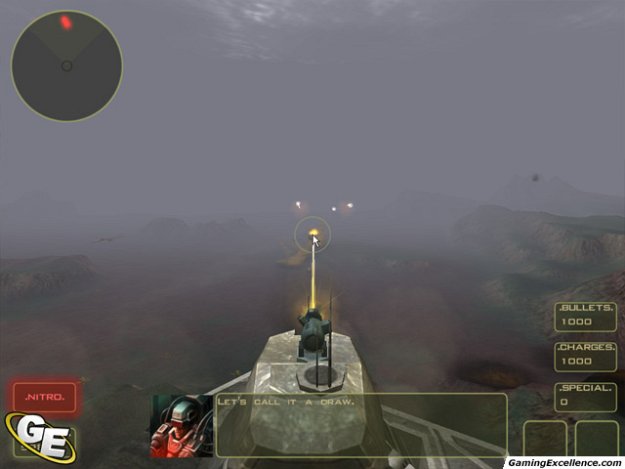 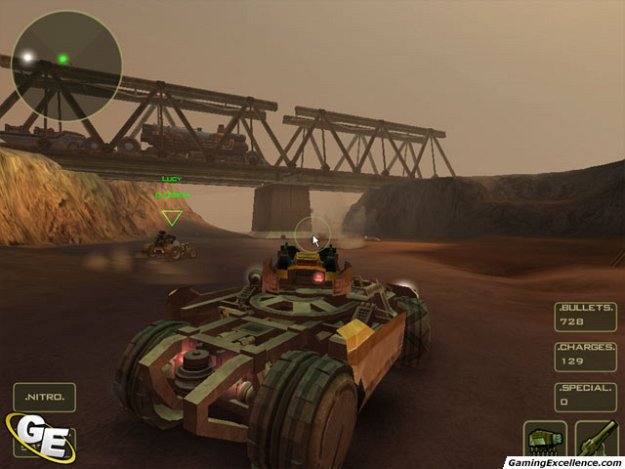 GRIN has been long known for developing the fast-paced racing title Ballistics, released in the middle of 2001. They have returned with a new title, using an enhanced engine based off that of Ballistics, except this time around, the game is just about as fun as they come.

Remember Activision's Interstate 76 released way back in 1997? Take the fast-paced shoot-em up style gameplay, perfect an already solid game engine, and you have Bandits: Phoenix Rising. Step into a heavily reinforced dune buggy with an ungodly number of cannons, mine droppers, and other such devastating weapons, and blow as many baddies up as possible. Welcome to the world of Bandits.

Rewdalf and Fennec, a pair of bandits in an urban wasteland stretching hundreds of miles. Part of the gang known as the Wolfpack, this duo must compete and overcome rival gangs such as the Crusaders, the Flaming Pumpkins, and the Enclave, in an ultimate attempt to get to the gold behind the walls of Jericho City. Fennec is the brainchild behind the whole operation, a quick witted and daring commander. Rewdalf on the other hand is quick to the guns, nothing he enjoys more than a beer and a lot of destruction. A former Flaming Pumpkin betrayed, Rewdalf is in it for more than a little excitement, he wants revenge and nothing is going to get in his way.

Graphically, Bandits has its ups and downs, the aesthetics are surprisingly good overall. Although the environments may seem a bit lacking in detail as you are primarily battling in the desert, vehicles and structures are nicely presented. Explosions and the scattering of debris when an enemy is destroyed, although arcadish, are very enjoyable. One of the coolest elements presented in Bandits: Phoenix Rising is deformable terrain, the ability to blow craters in the ground with some of the larger weaponry. Although this isn't included as part of the multiplayer mode, is a fantastic element nonetheless. Overall, the presentation of Bandits: Phoenix Rising is very adequate for the style of game.

Audio is where Bandits: Phoenix Rising really shines. Although the background music is not of my favorite genre, it is very suiting to the title and players will likely enjoy the soundtrack presented in the title. Dialogue and voice acting is phenomenal, something players should have no problem jumping into. Although the storyline isn't overly strong, the dialogue is way overacted, although in this sense it is a very good thing. The whole sense of spewing hilarious lines out in an Scottish accent is absolutely fantastic, adds much to the overall mood of the player and relaxed atmosphere of the title. This is one element that the developers have perfected, without a doubt the strongest aspect of Bandits: Phoenix Rising.

Bandits spans twenty-two different missions and contains multiple endings depending on the path chosen. Unfortunately, many of these missions contain very similar objectives; it doesn't take long before raiding convoys becomes extremely boring. Fortunately though, Bandits features a variety of multiplayer modes, making use of the GameSpy Arcade matchmaking software for Internet games. Gameplay wise, Bandits is a very strong and engrossing title, although difficult at times it seems to have a way of keeping players coming back for more. Whether you are raiding a convoy truck or simply taking control of a fortified enemy base, Bandits involves a lot of shooting, not that it's a bad thing. As mentioned earlier, the physics model of Bandits: Phoenix Rising is a modified version of that found in Ballistics, the realism and beautiful handling of each vehicle is as expected and offers much to nearly everyone. Bandits is a very simple game to step into as the driving model is relatively simple, yet a wide variety of advanced techniques are available, allowing experienced players to perfect their technique and overcome the massive waves of enemy vehicles.

If you enjoyed Interstate 76 or simply like to blow a lot of crap up, then Bandits: Phoenix Rising is right up your alley. Although some of the missions become very repetitive, GRIN's latest shooter is likely not to leave you feeling disappointed.