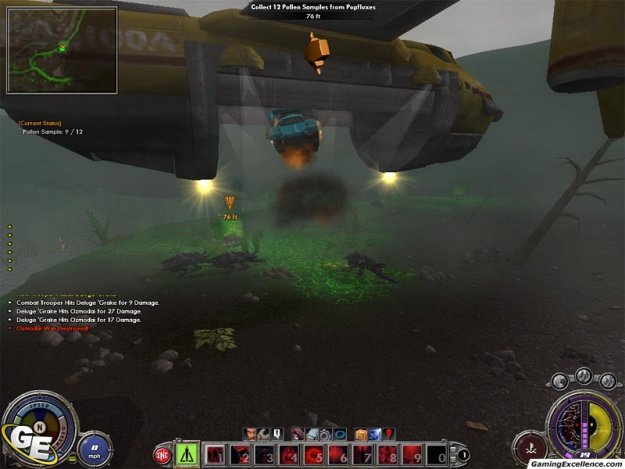 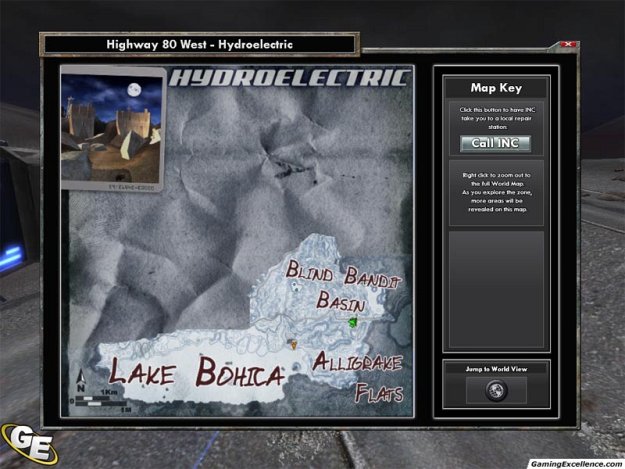 The latest in NCsoft's lineup, this interesting foray into the massively multiplayer genre has several things going for it at first. For one, there are no elves, orcs, or wizards to be seen. Second, you drive a tricked out car that doubles as a weapons platform across a post-apocalyptic Earth. Third, blowing stuff up is fun. Fourth... everything in the future is a shiny neon colour, and well that's about it. For all the things it does right, Auto Assault doesn't have much meat on its bones. Fun at first, but there is not much to keep the player going, and paying, month to month.

Your character is a member of a group of beings fighting over the scarred surface of Earth. The back story has something to with aliens, mutants, cyborgs, and nuclear weapons. Long story short, you are either a mutant, a cyborg, or a human, and each of these factions have different abilities and perks. What they all have in common is a shared hatred for each other and a need for speed. And guns, they have many guns sticking out of every surface on their cars, trucks, or vans. There are four classes you can choose to be, standard warrior, healer, summoner, or stealth based classes. Car customization is possible if limited to weapons and paint jobs as well as adding cosmetic scoops and spoilers. Player avatar customization is non existent after creation, but there are enough options to keep everyone looking unique.

You'll spend most of the game doing missions which involve driving from point A to point B, or killing a certain number of monsters to collect rewards. The post apocalyptic terrain is well done, which is a difficult thing to do. Full of rich browns and neon greens, scattered with ruined cities and polluted lakes, the terrain is anything but barren or boring. The enemies you face are similarly varied. There are vehicles, helicopters and infantry from opposing factions as well as mutated plants, animals, and insects to content with. Unfortunately all that variety no longer matters after the long hours you must spend driving back and forth over the same terrain to advance in level high enough to take on the next section of the game. Soon you will no longer care about killing monsters for their tiny experience reward and just burn through to your next mission objective.

Combat has a few interesting twists and is very action oriented. Your main turret weapon locks onto enemies within a certain range, while your front weapon can only attack in an arc ahead of your car. Since you receive a bonus to your armor while moving, you must coordinate your driving with keeping your adversary within range of your weapons. There is also a melee weapon mounted on the front of your car, which turns infantry and low level monsters into a fine red spray easily enough. Back up your weapons with class and faction specific powers to aid your allies or hinder your opponents and you have a simple yet enjoyable combat system in place.

Plus your weapons and skills make really fancy lights and sounds when they go off. Your car is often little more than a ball of multi-hued light in the middle of your screen dealing destruction to enemy and inanimate object alike. While it all looks fancy at first, a closer look reveals that the textures are blurry, and all the shininess in the world won't cover that up. The in-game music is great but some sound effects need work. The vehicle engines emit barely a hum and some weapons sound just plain wimpy. One machine gun sounds like a maraca, and an acid spitting gun sounds like a low powered sprinkler. While your car often looks menacing, and can level almost anything in sight, it often has no bark to back up its bite.

The crafting system is simple, but not as enjoyable as the combat. Step one of crafting is destroying enemies and ruins in the wastes to salvage crafting components from them. Then refine those materials. Buy a broken object from one of the three crafting disciplines (armor, weapons, or items) and repair it at a crafting station. If you repair it, you can craft it multiple times if you have the proper components. Practice earns you crafting skill which means you can soon repair and learn better items. If it sounds complicated, you're right. That is only the main steps too, there are many more different points that must be assigned everywhere to make sure you can craft an item or add enhancements to existing items. The items you craft aren't really useful by the level you are able to craft them at either. This wouldn't be so bad if you could sell them to other players, but doing so is a difficult task.

There is no auction house in the game. There is a trade channel, but spamming trade messages is a poor way to do business. I once sold some paint to a player since he was right in front of me while chatting in the channel, so buying or selling is really up to chance. It's just not a very social game. Player avatars have no emotes beyond jumping. The game is so solo friendly that it is never required to team up with other players to form a "convoy." All areas are instanced as well, which means you'll never see more than a dozen players sharing the road with you at one time, so there are usually very few other cars to converse with. The only time it is a good idea to team up is when facing a "boss" opponent who has easily ten times the hit points of your character. Having a few partners makes the battle much more enjoyable, but since it is hard to find people interested in grouping, simple perseverance will win the day too.

Since there is no death penalty in the game it is easy to repair and leap back into the fray with the powerful enemy. Once your vehicle is reduced to zero hit points and disabled, a helicopter will instantly scoop you up and drop you at the nearest repair station. After a minute of repairing you are a good as new and can re-enter the fray. No experience loss, no item wear, you just jump back into the action. It's a mechanic for a game that prides itself in the amount of action and destruction it provides. Death is just a speed bump on the road of mayhem.

The player versus player battleground becomes available at level 40 but lower level players can blow each other up in the arena league. While I didn't advance any of my characters to level 40, it takes about an hour of play to level up, the combat I found in the arena was underwhelming. Pressing the "instant action" button in the arena means waiting for the system to match you with an opponent. This wait time provides you with enough time to perform all the crafting you could want, plus more. When I was finally matched, my opponent was always either double or half my level. The matches were never fun and always one sided. One of my matches against an engineer was almost comical. His healing abilities would instantly heal any damage I dealt to him, and while I raced circles around him in the area, he calmly sat in the middle and allowed his robotic minions to do the dirty work.

Auto Assault is like a MMO light. The social and teamwork aspects are filtered, while you get the full flavor of combat and crafting. You can trick out your car, but not your avatar, and I've never seen a car with much personality. Which begs the question, if this is an MMO light, why would anyone pay the $15 a month that the more feature heavy massively multiplayer games charge? The answer is not many people would pay that much. Perhaps $5, or even $10, but anything more is just asking too much for this game.