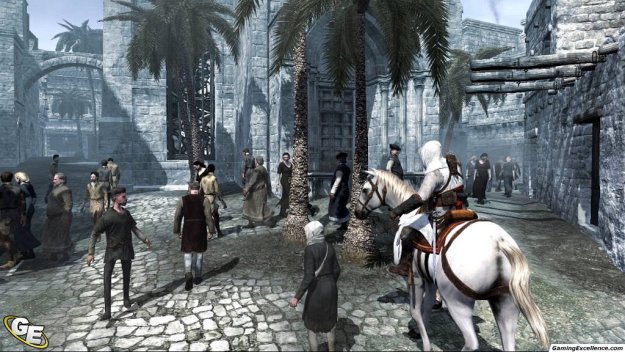 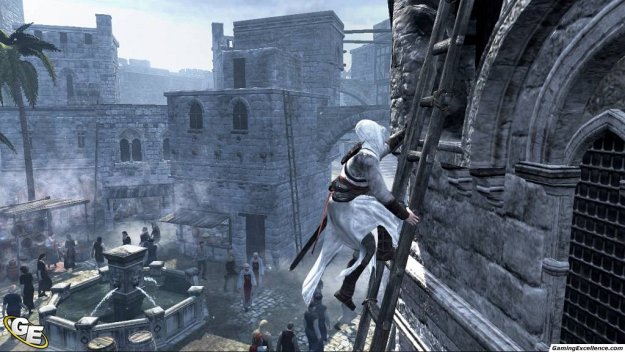 Assassin's Creed was released late last year for both the Xbox 360 and PlayStation 3, and features two separate plots that run in parallel. Set in the area around Jerusalem, Damascus, and Acre during the Third Crusade, the first storyline features the actions of a trained assassin by the name of Altair. The second story is set in the future and records the experiences of one Desmond Miles, a bartender who's been taken against his will to discover secrets locked in his past and his ancestor, Altair. The two plots alternate between each other as you play, revealing more and more in both timelines, and are fairly interesting to follow, albeit a little slow-paced (depending on how much you wish to do). But perhaps I am getting ahead of myself.

The core of the game, as you may have guessed from the title, is assassination. Altair is given the task of finding and eliminating nine different men in three cities that are prolonging the Crusade and therefore devastating the land. This will take you through three cities and the countryside between them on a graphically impressive scale, allowing you to survey all the land around you. In each city, you must gather information about your target before attacking them, and while this will take up most of your time playing, it is also one of the game's biggest flaws.

There are a few ways to find information, such as picking the pockets of someone, eavesdropping, interrogation, or completing a few missions for an informant. On their own, each of these is interesting enough, being either short enough that you don't mind the lack of choice in the matter, or free-form enough that you don't notice the time it takes to complete. There are also some civilians scattered around the cities that are being harassed by soldiers: save them, and you'll get the help of the people.

The problem with these tasks, however, is that you do them over and over and over again. Every assassination mission follows a basic pattern, in which you must scale a tower to find your bearings, find a couple pieces of information (more, if you want to fully complete every assassination), then finding and killing your target. It gets old pretty quickly. One of the biggest complaints is the inability to skip any of the cutscenes within the game. These occur on two events: you have a conversation with someone, and after you kill your target. While it may not seem like a lot, when every person you save and every task you complete gives you a few sentences about it, it tends to add up.

But being an assassin is not just about running up to your target and introducing him to the pointy end of a sword repeatedly. You have a variety of tactics at your disposal, both for taking out your opponents and for hiding from them. Altair comes equipped with three weapons: a sword, throwing knives, and a wrist blade. The first two do exactly what they sound like, which is stab people close up and stab them at a distance. The wrist blade is probably the most important of the three, as it can be used stealthily without giving away who you are. Taking out your opponents before they even realize it is quite important, lest you announce your presence to the guards.

While you can walk around on the streets of the cities like some sort of peasant, why do that when you're a highly trained assassin? One of the most notable features of the title is the way that you can scale any building, and jump across any rooftop. By holding two buttons (the 'foot' and 'run' buttons), Altair will run up buildings and start to scale them by grabbing hanging outcroppings, balconies, and whatever else he can hold onto. Additionally, running across areas of rafters or small spires while the 'Parkour' mode is engaged will have Altair nimbly hopping across as a quick speed. This is clearly what makes the game so much fun, as going anywhere is a matter of finding a series of points to jump across or scale. Animations during these actions are particularly fluid and impressive.

Combat is not terribly fun in this game. While it has its moments, it feels pretty repetitive overall, especially when switching from open-ended and imaginative wall-climbing and roof-hopping. Essentially, you can either block or attack. You can also counter enemy attacks as well as grab them and toss them from side to side, attacking when they're down. This combination of moves can lead to some interesting battles, like when you're on a tall rooftop and one misstep means death, but battles are usually pretty simple. A lot of the time, you can win just by repeatedly pressing the attack button, though this may take some time as your opponents enjoy blocking. However, if you don't want to fight, that's fine too. All you need to do is hide in the nearest pile of hay, jump into a rooftop pagoda, or simply sit peacefully on a bench when no one hostile is looking to get them off your back.

As this is a console-to-computer port, one of the key issues is how it has held up in the transition. First, the tech requirements are pretty steep, and though you're not required to have top-of-the-line hardware, you're going to need something good if you want anything other that fairly minimal detail. Still, the results are quite impressive, such as being able to run in finer detail than shown on the console versions. The controls also hold up quite nicely, and all your actions are easy to perform and are completely remappable, which is something you don't always get in these ports. The only real issue I found was some sound troubles: whenever someone would speak or in particularly ambient areas, the sound would repeat the first second or so of sound, making it seem like everyone back then had a stutter. There are also some extra missions, but this does not add up to a lot of new gameplay: some missions in the cities are basically different from their console brethren, and while this does lessen the repetitive nature of the missions as a whole, it does not prevent it completely.

There are a lot of things that make Assassin's Creed fun to play. However, it also feels like the game is missing things what could've made it a lot better. The free-running is fun to play around with, but it by no means holds the game up by itself. The wide open cities are fun to run around in, but with only a set amount of things to do, and no real reward for doing them, things tend to get dull and feel the same. Still, the game is a lot of fun through at least once, whether you want to complete every mission or just do the minimum and blaze through the game. Its transition to the PC has held up quite well, too. All in all, when it comes to free-running assassination games set in the Middle-East during the Crusades, Assassin's Creed is by far the best.