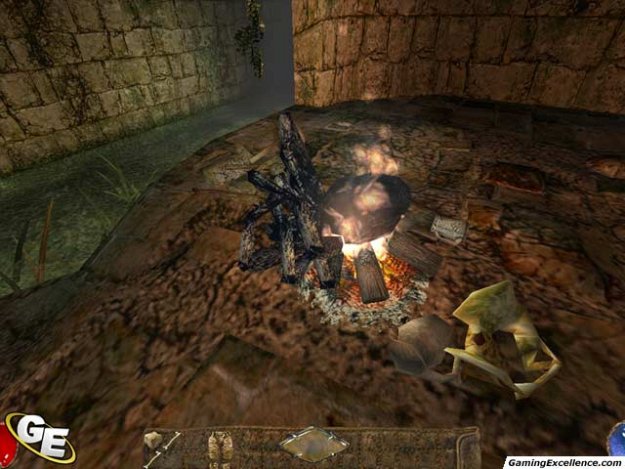 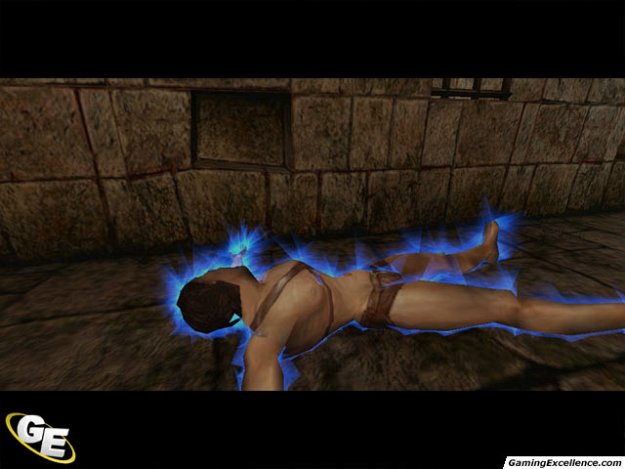 Without the sun, the city of Arx has been frozen over, its inhabitants forced to move underground to the old, abandoned dwarf mines. You find yourself captured by a Goblin and imprisoned, unable to remember who you are. At this point, your sole goal is to escape this dungeon, somehow realize that you are the special guardian who is to defeat Akbaa, the Lord of Destruction, and save the city of Arx. However, so little of this story is revealed to you through each cut scene, it may take hours to understand even the slightest idea of your quest. Welcome to Arx Fatalis.

Developed by Arkane Studios and published by Austrian based JoWood Productions, Arx Fatalis is dubbed a "role-playing adventure" by its creators; it attempts to blend the depth of character development from a role playing game with the instant action and problem solving techniques of an adventure game. Unfortunately, this is precisely where the problems begin. Arx fails miserably while trying to blend these two different genres; to the point where the player feels the gameplay elements are completely forced and poorly integrated. The game is very linear, with minimal exploration and few side-quests, not to mention the steep learning curve. The interface is far from intuitive and extremely difficult to learn. Specifics of this are seen in the map, inventory, and quest log screens, which are a challenge to understand, especially for novice players. Simple tasks such as equipping an item involve key and mouse combinations that are not easy to memorize, and seem poorly designed. Also, the unpatched version out of the box is almost completely unplayable, many of the menus contain massive bugs. One example of is the fact that the skills menu flickers so much that is is impossible to tell how skill points have been distributed, simply one problem after another.

In the graphics department, this game is neither amazing nor horrible. It consists of a large 3D world with many interactive items adding to the dimension of the underground environment. The videos are relatively well produced, but they do little to tell the story or advance the plot line. The cut scenes included provide only a brief insight into the overall picture, making the game difficult to understand. The underground textures of the mines are extremely bland and very repetitive, lacking in overall color diversity. Another major issue is the fact that the brightness and gamma of the graphics were far too low, even on the highest settings. Without cranking the gamma nearly to the max and washing out the colors in the process, it was nearly impossible to visualize any object or detail, a highly reported issue that has yet to be corrected.

The game averages moderately in the sound department. While the voice acting in the cut scenes is impressive, the in-game sound effects are nothing special. The musical score lacks depth; it creates mood and atmosphere, yet few dramatic changes are noticeable throughout the game. There is simply no movement to parallel the game's action, contributing to the dull underground environments.

The battles are of critical importance to the genre, another element where Arx Fatalis fails miserably. For starters, the two movement modes (mouse look and cursor mode) are not only tedious and difficult to use, they create much confusion for the player. Neither seems intuitive and the movement is choppy at best. The combat system is generally very slow, with a "step in and back away" style that lacks direction and focus on action. Enemy AI is extremely poor; on multiple occasions a spider would walk into a fire trying to follow the player and kill itself in the process. Considering the fireplaces are statically placed and do not move, one would think that the AI would be smart enough to walk around the fire, yet once again proven incorrect.

On the other hand, the game has an original, innovative magic system based on mouse recognition. The player must collect "runes" to form spells, and draw the sign of the rune on the screen with mouse movements, which in turn will cast a spell. This can be extremely fun at times, and spells can be hot-keyed to number positions for fast casting in intense battles. However, it is very tedious and becomes impossible to accomplish in a dire moment as only three spells can be hot-keyed at a time and once cast, the spell is removed from its respective hot key. This forces the player to "memorize" the spell again, and moves the other spells down a position in the sequence, causing extreme confusion in a battle situation.

Overall, the game has a fairly average storyline and plot once you can figure it out. It features standard characteristics as primary skills, which are increased when a player levels up, including strength, dexterity, intelligence and constitution. The game also provides a wealth of upgradeable secondary skills, making every character unique. Unfortunately, the realism in the game extends too far, forcing a player to eat food on a regular basis by either finding basic essentials or killing and cooking animals. This becomes a nuisance to say the least, and although interesting at first, can become repetitive and simply boring over time. The game's manual has extensive information about enemies and skills, and is a must read if you wish to sort out the complex key system used for attack mode, spell mode and interacting with items. Unfortunately though, the game is much too linear and lacks replay value.

The combination of the adventure and RPG genres seems like a promising idea, who wouldn't enjoy solving a complex puzzle while advancing your character and fighting off enemies? Unfortunately, although the basic concepts of the title are solid, mediocre implementation of these ideas struggle in grabbing the interest of most fans of the RPG genre, a fatal downfall to Arx Fatalis.