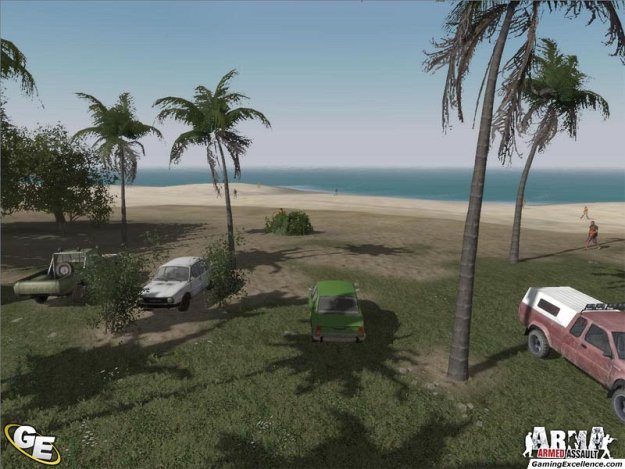 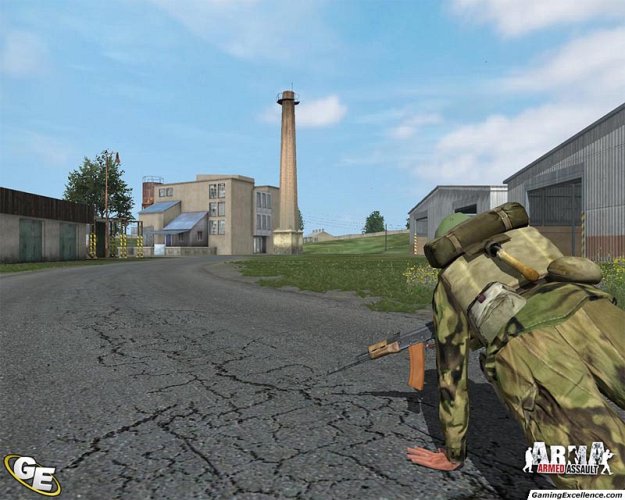 Welcome to the battlefield, soldier. It's time to suit up, ship out, and make sure to take out the enemies before they get you in your sights. Do this, and you may survive long enough to actually live until tomorrow. Fail, and you'll be returning home in a bag - paper or plastic?

In the campaign of this latest title by Bohemia Interactive (you might remember them by their last release: Operation Flashpoint), you're in the fictional nation of Sahrani, stationed in a situation where your soldiering skills can't do anything but rust. That quickly changes, however, when an attacking force invades and everything goes to hell, thrusting you and your fellow soldiers into war.

Armed Assault (ArmA) brings a great level of realism to the traditional wartime first-person shooter. You can play either play through individual missions or a campaign mode, but before all of it you'll probably want to go through the training mode provided. This game is not simple. In fact, there are so many commands to map to buttons that you'll actually be able to map double taps, like pressing the 'forward' button twice to sprint.

The game is by no means a simple affair. You are not Rambo, and all it takes is a simple, well-placed shot by the enemy to take you down like a bag of sand. ArmA emphasizes tactics and strategy, using cover to your advantage, and knowing where you opponents are. The allure of the game comes from the freedom of movement and the large amount of space you're presented with. You've got a massive landscape to strategize with, and being able to use tactics like flanking your enemy or targeting a foe from over a kilometre away is the key to success. There's also the ability to take control of helicopters, tanks, and other vehicles, taking the battle to the enemy by other means, adding to the strategy of the game as you take up various positions on the armaments (though the controls, take some getting used to).

As an example, one of the first missions of the campaign mode was to destroy some armoured vehicles equipped only with a few explosives and a bazooka. After a few tries, I realized I wasn't quite up to the task, and instead snuck away. Finding another enemy camp, I took down some of the guards posted, stole a helicopter, flew it to the armoured vehicles (after a lot of crashing, unfortunately) and destroyed them with ease. Options like this aren't always available, however, and it's sometimes all-too easy to find yourself with no ammo, no backup, and still another vehicle gunning you down.

Squad control is also very important in ArmA, but you won't always be the one issuing the commands. Sometimes, you'll be taking them, being told where to go and who to fire at. When you do get command of a squad, the options available to you rise dramatically, while adding in the extra challenge of keeping track of your men and making sure they don't jump into the line of fire.

The interface for the game appears fairly simple. Most of the time the screen is empty, save for your weapon and a targeting reticule, but things like a clock appear when you character remarks on a location ("Rifleman at 12:00!"). Most important, however, is the interface for troops under your command, to see their status and to give them orders. It's a little confusing at first, especially for those who don't have much experience with this type of game, but after a while tapping out commands becomes a little easier once you're accustomed to the command shortcuts.

While the learning curve is going to present problems for newcomers to the series, that's not the only problem with playing the game. Technical issues are one of the major drawbacks to playing ArmA, and they're apparent the moment you start. In fact, just to play the game, I needed to download a beta patch to prevent the game from crashing five minutes after it started. Even after installing it, the game still crashes every now and then. You'll also notice various graphical errors throughout the game.

The campaign doesn't last too long, and the individual missions can be blazed through just as quickly, but the meat of the gameplay comes from the ability to make your own missions. Operation Flashpoint benefitted from a massive amount of user-generated content, and given the opportunity, it looks like ArmA could do the same, given enough time.

It's obvious that not everybody is going to enjoy the type of experience that ArmA provides. The emphasis on realism provides a great amount of difficulty, and technical problems add to the frustration as well (surviving an assault is pointless if the game crashes a minute later). The promise of user-generated content and the hope for future technical patches make ArmA a game worth buying for the realistic warfighter enthusiast. When it comes to first-person wartime simulators, it doesn't get much better than ArmA, but considering the lack of games with this level of realism, that's not saying a whole lot.