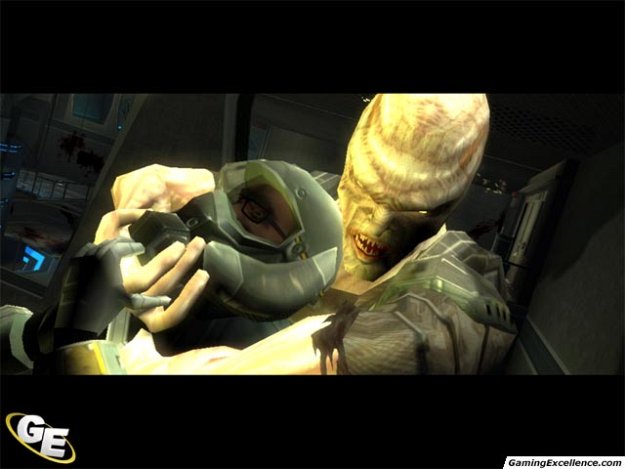 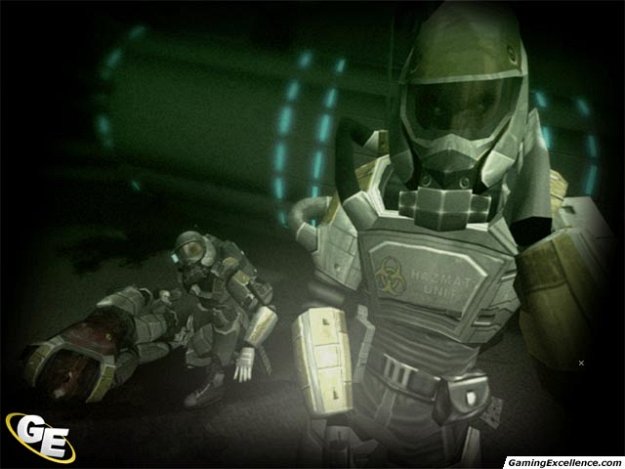 The stories of conspiracies, alien cover-ups and secret government projects have always been a part of the rumours surrounding Area 51. Although, it is perhaps unintentional, the Area 51 stories have therefore become part of an excellent staging platform for video games. Where else would you ever find such a bountiful supply of theoretical alien invaders? Midway grabbed the Area 51 mythology and milked the conspiracies for all it's worth. On top of that they do a pretty banged-up good job of it too. From Roswell, to secret alien experiments, all of these elements are present and explained realistically as part of the background to the game. This only further presents to the player a sense of reality. Even if it was never really there in the first place.

The basic storyline for the game is that something has gone seriously wrong at Area 51 and the military is stepping in. A virus has been spreading through the base and is turning the personnel into mindless killing aliens. An initial HazMat team was already sent to try and deal with the disruption, but went missing. Your unit is then sent in to discover the cause of the problem and try to find out what happened to the initial Hazmat team. Basically, a secret alliance with an alien race has turned bad and the biological weapons that were being developed have been released. The background material for the game is included in the manual and introductory cut scene. They do such a great job of explaining things in an understandable manner, that I feel it would be for the best if I not spoil too much of the story by explaining too many details.

The graphics in Area 51 are very well done and are certainly not the issue. Also, the rendering of the characters models, weapons and locals of Area 51 are well designed and add a sense of realistic gameplay. For those gamers who remember how Doom 3 didn't let you use your flashlight at the same time as your weapons…will be very pleased. Yes, your flashlight is duct taped to your weapons, even your shotgun, and I prefer that to the Doom 3 alternative. The flashlight is needed in a few key areas, but is not presented graphically in a realistic way. The beam illuminates well, but it doesn't project. It feels like you only see a circle of light about two meters wide and a few feet ahead of you. It does illuminate objects further away, but not to the same extent. You would think that the military would carry better flashlights. Maybe they should have bought Duracell batteries. Still, this is only a minor annoyance, and doesn't keep the game from being playable. One of the biggest areas for debate may be because of how few enemy models there are to dispatch. Yes, it is true that all of infected base personnel should look like crazy zombies who are willing to bite your head off, but when they all look the same it becomes somewhat of a disappointment. On the flip side, you probably won't notice that fact, or even care for that matter. Who cares what the last thing you killed looked like? They all end up being corpses anyway.

The weapons are also an area that Midway designed very well. The small number of included weapons look and sound great when fired, but they do leave the feeling that there could have been one or two more weapons available. The game does allow you to carry two weapons at the same time, but unfortunately doesn't let you mix the combinations up. For example you can dual wield assault rifles or shotguns, but you can't mix the two together. Also, the game does not let you fire them independently, but in the end, this can almost be overlooked considering the number of rounds you will be pumping into each enemy. Midway did a really good job of departing from the recent expectations for dual wielding. Unlike games like Halo 2, where dual wielding was such a highly praised addition, Midway chose to stir the pot with something different. Since when is it feasible to reload two shotguns or assault rifles at the same time? Midway answer this question by giving you a full clip when you pick up a dual wieldable weapon. Once the ammo is gone, the character ditches the second gun, reloads, and those goes back to firing the single weapon. Realistically sound.

One of the most brilliant pieces to the single player campaign is the audio. Midway took no chances here and brought in top talent to do the voice-overs. In the game we find the story being narrated from the perspective of Ethan Cole, portrayed by none other but David Duchovny, our favourite X-files actor. Duchovny does an excellent job of portraying an emotionless response to the events, a perfect fit for a soldier who has been through hell and back. Ethan Cole, is not "living" the events of the game, he is retelling them. Overall the voice acting in Midway's Area 51 is amazingly well done, and does an excellent job of portraying both mass panic and the eerie calmness of trained soldiers. The in-game music is a mixture of synth and techno beats that do an excellent job. Unfortunately it isn't used often enough, and tends to more often than not be found only in the cutscenes.

While Area 51 does everything right in the gameplay department, the level design is debateable. Depending on whether you prefer an open-ended game or something that is more linear, but fast paced, this will determine your gaming experience with Area 51. The first half of the game is a very fast, squad based game. But, as any experience horror game player knows, everyone will eventually die but you. This is where you really see some of the limitations of the game, and just how linear it really is. On the other hand, there are some rooms that you will walk into, and say to yourself "Gee, wow, I didn't expect to see that." Then again, it is Area 51. Another feature that has been added to the game that adds some depth, and somewhat of a challenge, is the unlockables scattered around the levels. To pick them up, you use the scanner to take a 3 second scan, in order to unlock something in the menu system. When you are in a firefight and trying to scan one of the unlockables, 3 seconds can seem like an eternity.

Midway's Area 51 is a competent first person shooter that contains great graphics and sound, but does not necessarily use it to its full potential. Once you complete the approximate eleven hour campaign, the game really doesn't offer much to inspire players to do it all over again, one of the big disappointments overall.