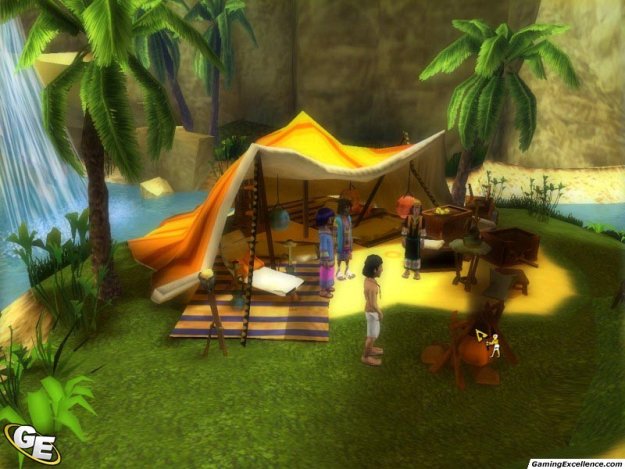 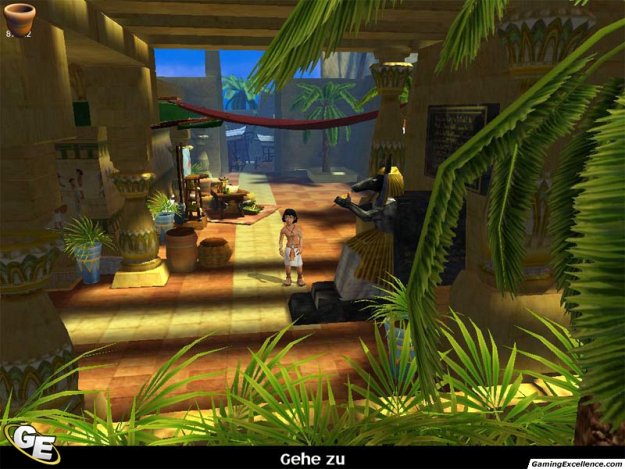 It isn't easy being Assil. First, he can't find a bottle opener. Then he contracts a terrible death curse (as if there are any other), and then he's grounded for a week! How will he ever solve his predicament? Why, with a healthy dose of running around and using/combining seemingly random things, that's how.

Ankh is a light-hearted point-and-click adventure game set in the ancient land of Egypt, where gods ruled, pyramids were filled with an ol' death trap or two, and being a pharaoh meant you could drop whomever you wanted into a dungeon on a whim. The game is a throwback to the adventure games of yesteryear, and even one of the characters breaks the fourth wall to tell you that the developers had a lot of inspiration from classics. And it's just as simple in this game, if not more so. You click on something to look at it, and if it's something that can be picked up, talked to, or used, you right click to perform an action. Easy.

The thing is there were problems with the classics. And they persist in this game as well. The first, my personal annoyance in all games of this type, is the pixel-hunting. Though, with the 3D engine this game uses, you're not hunting for pixels anymore, you're hunting for small models that escape your cursor. Since the game doesn't really make an attempt to point out what can and can't be interacted with, it's easy to find yourself wandering around various areas for a lengthy amount of time because you didn't notice the little branch that could be picked up off of the dying tree. It's a pain to have to drag your mouse across the digital landscape, just to look for a bowl or something that you might've missed.

The puzzles in the game range from the glaringly obvious to the fairly skull-scratching. Most of the time when I got stuck, it was because I was lacking a critical item, hidden away in some cubby-hole of the screen where I did not think to place my mouse cursor. There are those puzzles, however, where you have to delve into the tried-and-true method of combining every object with everything else and hoping something works out. Still, I didn't find too many of these. For me, it was all about searching for stuff.

The charm of the game is hard to ignore. Whether you're looking at the cartoony images or the tongue-in-cheek dialogue, there's a lot to like about the way the game presents itself. The characters themselves are memorable, such as the assassins fresh from the 'academy', or the ghetto ferry captain who wears medallions, sneakers, and a bandanna. They're amusing and keep the game and dialogue (though there isn't too much) from getting stale. The voice acting is a little above average, though there are parts and people where it tended to sink below a good standard. The dialogue tends on the humorous side, but at times went that little distance that made me roll my eyes. Still, it's fairly glib and has a fair amount of comedy within it.

It's almost a shame that the game was so short. Considering its audience and rating of "teen", I expected a little more length and depth to it. You'll be able to play as another character, switching between that person and Assil, later in the game, so it does add some variety to the mix.

All in all, Ankh will most definitely appeal to fans of the old-school adventure games. It's fun and humorous, if not a little short, and except for a few snags here and there when it comes to looking for items or trying to think up the next too-convoluted solution, it's a fun game to play through to the end.