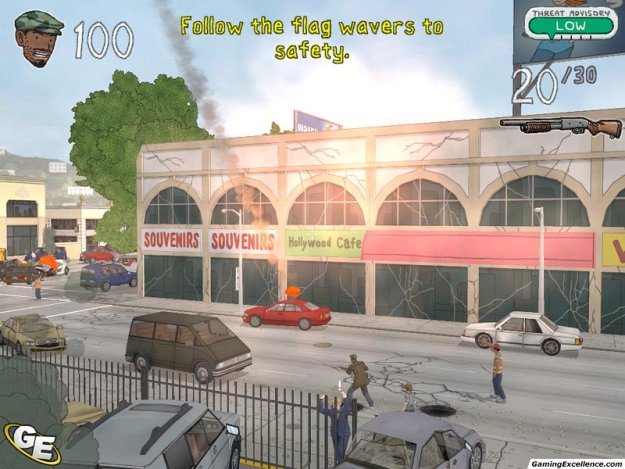 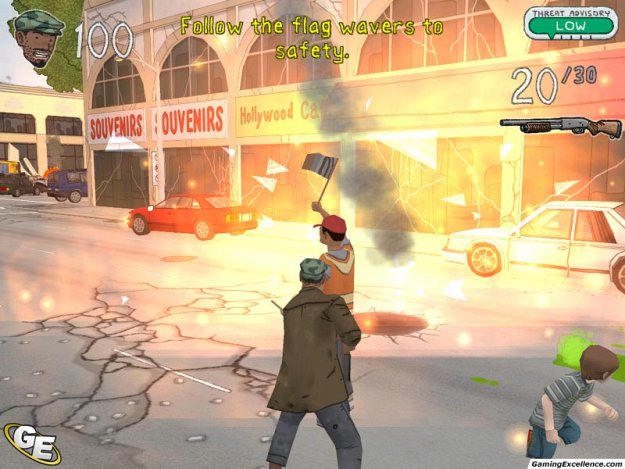 The video game industry has a timeline that spans over 35 years, and every last person has enjoyed something it's put out at one time or another. Most of the time people look forward to headers, the spotlights that really gleam, possibly finding a gem in the hay and enjoying some unknown title. But then again, there is always other times in which people lose hope, when people stray and critique, when they just sit and think to themselves "I'd rather dip my balls in acid then play this ever again."

In what I like to call "Bad Game FU", you play as a bum named Anthony. The storyline of the game is in the title, a bad day in LA. Now by bad day, most of us would think missed the bus, walked to work or school in the rain, got a nasty headache, etc. American McGee takes the more logical route, and adds zombies, terrorists, earthquakes, meteor showers, giant burgers, and many other completely nonsensical things. The game has to be created on some premise, I know, but the combination just gets pointless. Lets just say, this game is crap from head to toe, including an absolutely ridiculous graphics engine that looks like a first grade coloring book, a collision detection system that can detect hits no better than Samuel L. Jackson, and sounds that all begin with "k" and end with "-ch".

Let's start with the quote, cell-shaded graphics, end-quote. Any creation of American McGee's mind should be outlawed, punishable by eyeball removal. This name should not be on a game, this name does not have the title, the presence, the insight, the creativity, the brilliance, or even the passion to have that name on this game. American McGee will surely be smouldered by this title, having made me feel more like I had received a beta copy by accident. This is not cell-shading, this is half-assed work. This is not what cell-shading shadows, effects, NPC's, vehicles, objects, weapons, or scenery look like, this is more so what my ass provides the world. Random shadows of particular rooftops appear out of thin air creating awkward shadows, scenery lacks texture and even manipulates itself into different positions when nearby objects are used or destroyed, and the characters faces are just plain fuzzy. The Bad Day L.A. is not cell-shaded, is not thought out, and is not a complete title.

Every weapon switch, every menu button, and every other navigation sound or option to continue are all masked with the same sound, "k-ch". The described sound is that of a loading shotgun, one of the ten weapons (three of which are non-lethal) in the game. Even switching through your weapons makes this sound, thus if you select your gauze bandages, K-ch, locked and loaded for some good ol' fashioned healing. The music has hotspots, not around speakers, radios, cars, or anything in particular, just random hotspots, not like you want to hear one of the three annoying songs anyway. By far the most amusing sound is the low quality "fapping" sound when you pick up a porno magazine; this increases your health by one permanently. Although it does sound like a disgusting concept, the sound is almost identical to the "eating a burger" sound, which makes it more or less tolerable, depending on perception. Sounds are even missing in key areas, such as when a vehicle collides with objects, or explodes, or even when using certain objects. In one cut-scene, a whole road gives way in an earthquake. Imagine this, a big yellow school bus chasing you down a narrow street, you take a quick right and see the bus drive straight into a stone barrier, what do you expect? An explosion? Squeeling tires and a nasty collision sound? Something I suppose, but something you will not get, as the bus will simply run half way into the barrier, getting stuck and not move, explosions and sounds saved for a more appropriate occasion I suppose. No such thing as Doppler effect in Bad Day L.A., although some of the comments made by some of the pedestrian's are humorous at first, they quickly become very repetitive.

Bad Day L.A. has no options, no extra play modes, no unlockables, and you won't even really care at this point if it has multiplayer. Cars float slowly to the heavens when they actually do explode, you can rub dog poo on you with an effect of pedestrians temporarily avoiding the smell (although some don't seem to mind), any other time almost everyone is running at you, throwing things with extreme anger, beating you with everything they can find. People rioting are supposed to be stopped, people on fire should be put out and healed, and people bleeding need to be healed before they drop dead. If you ignore any of these responsibilities in your sight, whether or not you can reach the disoriented and panicking individual that is glowing with flames or not, you will receive a "frownie". This "frownie" is a negative on your "threat" meter, ranging from innocent to international terrorist. If you get more and more "smilies", you stay as a low threat. Alt+F4 does more to the story line than this useless additive, as the pedestrians are just as furious no matter what your threat indicator says. The cut-scenes jump the story line from point A to point Delta Gamma, losing all sense of flow with developing plot or even a sense of missions. Gunfire comes from all directions from enemies that are even sometimes out of your sight. Player deaths and game-overs are simply animated with a fade to white, no sounds, no effect, no explanation. Healing people can return to their furious state, so be ready to kill them after. I also suggest turning on the location indicator, or else you'll have to find a squirrel for hints or non-pissed people for directions.

On the hole, Bad Day L.A. compares. Don't buy it, don't even look at it. The manual and cover design is the most professional part of the game, almost making me excited to test the game out, oh how wrong I was. If you watch Soul Plane three times in a row, or enjoy a nice plate of crap from time to time, then Bad Day L.A. is a hit for you, otherwise, avoid it like you would someone walking down the street covered in dog crap.