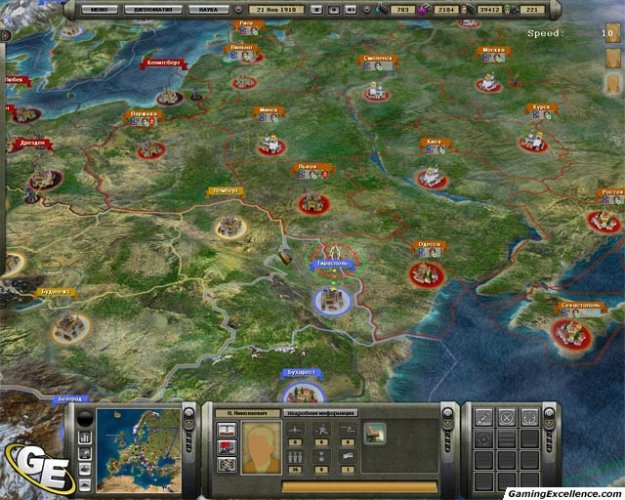 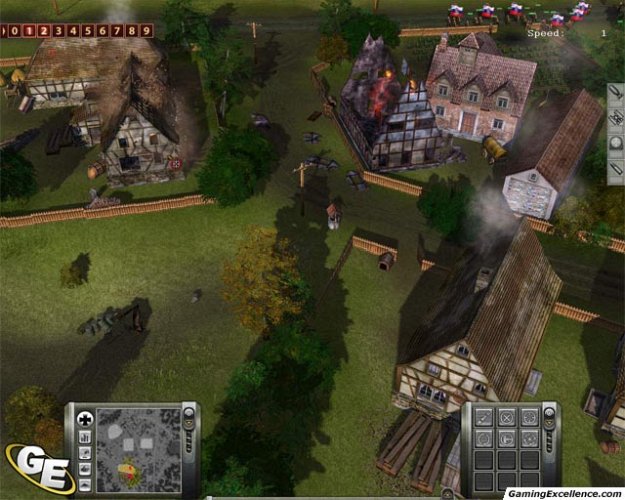 What do you get when you combine a popular genre, a game early in development that already shows an incredible amount of promise, and a development team committed to providing players with a unique experience? The result: a potential genre-defining strategy game. Aggression: Europe 1914 is a real-time strategy game published by Russian-based Buka Entertainment and developed by Lesta Studios. The build presented was a very early release and the final product is slated for release sometime in 2007, and yet it was one of the biggest surprises at this years' E3.

Described as one of the strongest English investments ever made by the publisher, Aggression: Europe 1914 utilizes a state-of-the-art proprietary engine that promises to bring the battlefield to life. The game contains four nations, with players being able to choose from Germany, Russia, England, and France, and is based between the years of 1914 and 1950 capturing both major World Wars. Aggression is a historically accurate strategy release; all of the units and technology is appropriate for the eras. As you progress through the game, players are given the option of following the historical timeline to a tee, or developing certain technology before it's time and thus changing history as we know it. It is up to you to define history, you decide whether or not the wars will happen, and I have to say that the flexibility of gameplay that permits this kind of experience is impressive.

The game itself is divided into two main gameplay modes; the battle mode, and a mode that takes on a much larger scope described as the strategic map. From this aspect of the game, players can manage a lot of different elements on a much larger scale than the individual battles, including political diplomacy, military deployments, and technology research. Using a world-map, you can move units in a similar fashion to that of Risk, forming alliances with other nations and shifting your military powers to different areas on the map, which will reflect the units in each battle in the combat mode. The game utilizes a lot of strategic elements and decisions, allowing the player to decide whether to strive to build the first nuclear bomb or to enhance and develop a highly trained and massive assault force. Diplomatic treaties, alliances, and strategic deployment all play a key role in the development of your nation as well. The strategic map is played completely in real-time, and the game offers a "smart" pause feature, allowing players to pause the game and assign orders, such that it has a bit of a turn-based feel to it. In addition, the developers have included a "fast-forward" option to quickly get past the slow months of rebuilding after a war.

Returning to the combat mode, every object in the game utilizes a huge polygon count, with completely destructible environments. The engine is completely 3D, supporting hundreds of animated units on screen at a single time engaged in massive battles. In fact, in the early build I was able to step into, the destruction and explosive effects were some of the best I've ever seen. Buildings blow away from the shockwave of a nuclear explosion or collapse into a pile of concrete and charred wood when hit by a shell or mortar. Nuclear explosions can level a massive area, blowing over trees and sending branches flying huge distances annihilating units and leaving the town in a pile of rubble. The detail is breathtaking; I can't even count how many times I asked them to blow up different villages to truly realize the after effects of a nuclear explosion in this on this level. An added effect which greatly enhances the overall feel of the game is the simple concept that the camera shakes slightly whenever an explosion is seen on screen, as one would expect to actually feel if you were standing on the battlefield. This simple concept translates enormously into the gameplay, bringing players a lot closer to the battlefield than typically offered by real-time strategy releases.

When I first took at look at Aggression: Europe 1914, I made the mistake of thinking the demo Buka was showing was a rendered concept trailer, while in fact it was real-time gameplay. The environments already feel alive with activity, whether it's the sway of the trees in a light breeze or simply the smoke puffing out the chimney stacks in the villages. The graphical effects demonstrated by the Buka team were beyond impressive with dynamic lighting and shadows cast by every structure and unit on the battlefield. These shadows are adjusted in real time based on the position of the sun, which shifts throughout the day. The Buka team also demonstrated a few other effects supported by the new engine, which could prove interesting as to how they are utilized in the final build. Most notably are the underwater effects, smoke, dust, blurred vision, and sepia techniques, among many others. In the build demonstrated, some of the units appeared a bit blocky, however it is very likely due to the fact that the game is still an incredibly early development, with at least a year left to enhance and polish the gameplay and core engine.

It is easy to mistake Aggression: Europe 1914 as yet another strategy game, unless you actually step into the action. You initially prepare the battles through the strategic map, then, stepping into combat mode, these battles are realized in real time. At this point, we see how enormous they actually are, with hundreds of units stepping onto the battlefield simultaneously and explosions occurring in every direction. Infantry units blow into pieces as mortars explode. The battles themselves are a sight to see, let alone experience.

Buka has an incredible amount of potential in Aggression: Europe 1914, offering two modes of gameplay, outstanding graphical effects, and the flexibility for a player to make a game as historically accurate (or inaccurate) as they please. Buka Entertainment may have a quiet gem on their hands with this one, and considering this was a very early build one can only imagine what is yet to come.