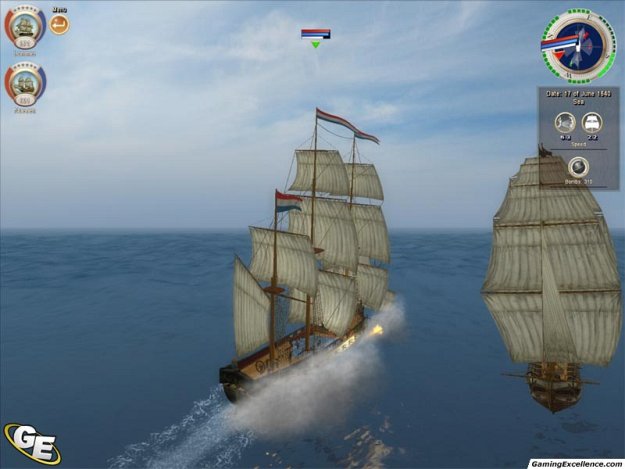 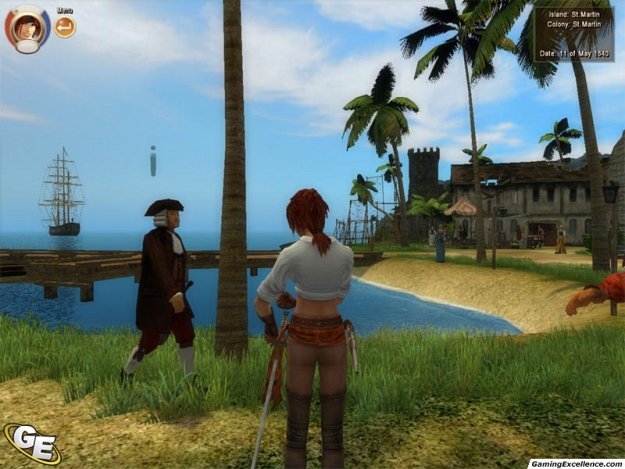 This summer has seen an influx of pirate-based games for every platform imaginable, which is not surprising considering that the highly anticipated sequel to the movie Pirates of the Caribbean hit theatres to smashing success. Following in this recent trend of pirate-themed everything, Age of Pirates: Caribbean Tales has recently come to the PC. We had the opportunity to take a look at this game at E3, and our preview told of our anticipation for its release. Dubbed an RPG by its creators, but probably better described as an action/adventure game with RPG-like elements, Age of Pirates allows players to select from one of two characters and progress through the game as they please. With this open gameplay and a visually stunning environment, at first glance this game still appears to be an excellent choice. Unfortunately, this turns out to be a rushed judgment to say the least.

Developed by Akella, the creators of the acclaimed pirate simulations Sea Dogs and Pirates of the Caribbean, Age of Pirates is the latest in their long line of pirate-themed games. It runs off of their new STORM engine, and is visually impressive to say the least. Unfortunately, we can only hope that this will be they're last pirate game; although the concept of the game is great, the execution (and probably market for the title) are mediocre at best. This is definitely one of those games players will want to like, but will have to try exceedingly hard to actually appreciate. Also, after this many games about pirates, it's about time we saw something new and fresh from this development house.

Upon starting a new game in Age of Pirates, players are presented with a screen that may seem a bit daunting at first. Besides being able to choose between two characters, there are tons of other settings that affect the gameplay. From the difficulty level to the nation to which your character belongs (and thus the nations to which your character is opposed) and everything else in between, Caribbean Tales seems to have it all. This wide selection of options complements the open storyline of the game well because players can not only choose how to play their game by making decisions before the game, but also by making in-game decisions that will affect the eventual outcome.

Set in the 17th century, this game allows players to explore sixteen different islands in the seemingly endless Caribbean Sea. On land, players are able to purchase additional ships from a selection of sixteen different types to add to their fleet, hire additional crew members to work various roles on the ships and talk with locals to find work and gain other important information. On top of this, towns are the places to repair ships after destruction from the intense naval battles, upgrade them to increase their speed and damage, and purchase supplies for the next journey.

Towns are also the places where players can accept quests from NPCs in order to gain experience as well as make some cash. This aspect of the game is quite nice as it allows the story to progress without forcing players along a linear path, but in the end it doesn't seem to matter all that much because combat skills and naval capabilities seem to play a larger role than the experience that any given character has acquired. On top of this, most players will have more fun either turning on and attacking as many nations as possible, or being friendly and exploring instead of leveling and questing.

Unfortunately, the former of the two may prove to be more difficult than one may expect. This is the result of two inherent problems that plague Age of Pirates: the controls and the combat learning curve. The former has more to do with land combat than naval battles because it has to do with the way keys are mapped to character movement on land. At first it simply seems a little awkward, but not an insurmountable problem. The mouse controls the direction your character is looking, and the W-A-S-D keys control movement. However, the A and D keys are initially mapped to "strafe left" and "strafe right", which turns out to mean "walk diagonally forward" left or right. This may seem like a minor issue, but all other games usually use those two keys to simply turn left and right, and when you are expecting to turn but end up moving around, it can get a little messy. The controls are also not entirely re-configurable either; you can choose to map alternate keys to these functions, but you cannot map any keys to look left and right (or to even perform a real strafe for that matter). In the end, this doesn't really matter all that much for basic land movement, but land battles are more difficult than they should be.

On top of this, Age of Pirates also fails on sea battles. This isn't entirely related to controls however, but rather the insane level of difficulty required to hit enemy ships. The learning curve here is too steep and may turn many players away from the game because even while attempting to avoid battle, there are random encounters that are bound to happen with all of the sailing that is found in this game. This kind of brings me to the other major issue that holds back the gameplay in Caribbean Tales. Because players are constantly switching between towns, the harbor area and the sea, this one really hurts as far as patience goes. First, while in town, entering any building requires a loading screen. The good news is that the developers added a feature that allows players to quickly choose between the important buildings they need (the tavern, ship repair yard, dock, etc) and enter them from a menu instead of walking around, but the loading screen still takes time. Loading between the dock and the boat also requires time, which may be expected, but then players are forced to sail a short distance out of the harbor area before reaching the world map area that allows them to move from island to island and this also requires yet another loading screen. It seems like more time in this game is spent switching contexts and loading between areas than anything else.

Fortunately, the graphics and sound in Age of Pirates are well presented. The graphics specifically are beautiful and the water effects are amazing. However, these two do not make up for the short-comings in other aspects of the game. On top of those listed, the game uses the StarForce copy protection scheme, and if not simply because of the technical reasons for not using this low level driver to protect game discs, I have on occasion found it to not recognize brand new, legal discs. Also, I find StarForce to take a ridiculous amount of time (even on a brand new PC) to verify the disc in the drive, whereas other alternatives are available. I also feel that the STORM engine is not quite ready for production; there is a recent patch for the game, but I still have problems with it crashing from time to time. And, it is simply impossible to ALT-TAB out of the game and return to the desktop for any reason whatsoever. This causes a complete lockup, which is unacceptable.

Although Age of Pirates: Caribbean Tales was shaping up nicely when we last looked at it back at E3, in the end it just falls flat. Many small issues that could have been easily resolved haven't, and other larger ones such as the StarForce protection used on the disc and the instable game engine stack up quickly against this game. The graphics and environment are beautiful, and the open-ended gameplay with RPG-like elements work great, but they cannot recover from the other shortcomings. One can only hope that Akella's other titles turn out better than this, or that they drop the pirate theme altogether.