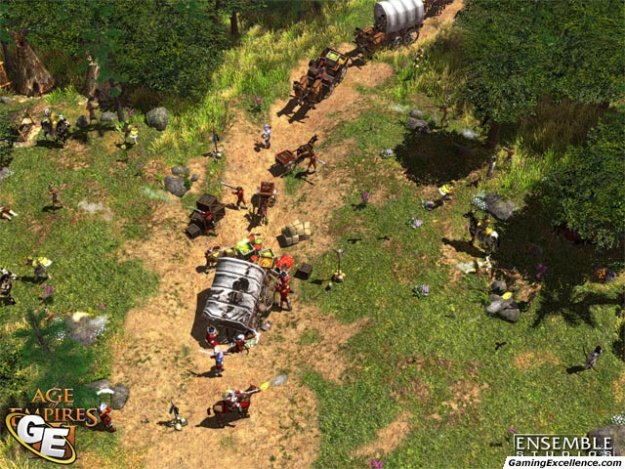 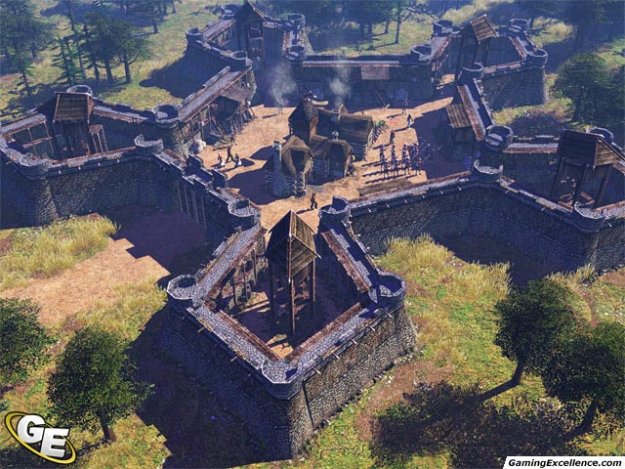 It goes without saying that Ensemble's Age of Empires series are well-known; it is still used as a modern-day reference when comparing real-time strategy games. From its initial announcement and conception, to first images, to this preview build, Age of Empires III is shaping up to be one of the premier titles for the PC at the end of this year, and a legendary evolution in the real-time strategy genre.

Age of Empires III takes the classic real-time strategy formula, throws in a few twists and turns, and a good handful of very innovative gameplay elements. When it ships sometime later this year, AoE III will offer a complete single-player campaign; the preview version offered only a brief insight into what looks to be a lengthy campaign. Offline matches on randomly generated maps, as well as full-online support are also to be provided in the final release. It should be noted that this build did not contain any multiplayer functionality, thus we haven't had an opportunity to explore the different multiplayer modes.

You can choose from one of eight different civilizations, French, English, Spanish, and Russian are the most common. Each civilization has a home city, and the game really focuses around this aspect. You build your colony with a town center, and as you grow and expand this empire; your home city (which you don't see on the gameplay map) grows as well. As you gain experience points through battles, trade routes, or simply advancing through the game, you can "redeem" these experience points in exchange for shipments from your home city. Whether its simply crates of resources that can be quickly gathered and added to your stockpile, units, or even fortifications such as outposts (sent on wagons), this element can really influence the outcome of a game. Some shipments, such as food and other resources, are "unlimited", as in you can redeem them as many times as necessary, while others (especially units), are mostly one-time gifts. Home city shipments are a dynamic, innovative element, and while it may seem to simply add an additional complexity to the game, Ensemble's made the decision to simplify other elements of the game in exchange..

Resource management is a huge part of the real-time strategy genre, and every development team does it differently. Number of different resources, drop sites, gathering rates, and even management of peasants is a major development decision, and Age of Empires III takes the genre back to its roots. When you look at the evolution of real-time strategy games, Rise of Nations having six or more required elements, and Empire Earth II having even more, it seems to be the trend in newer RTS games to spend a lot of time micromanaging your colony rather than actually planning invasions, building units, the more tactical side of the genre. Age of Empires III has taken a different route; there are only three resources to gather, food, wood, and coin. Furthermore, for coin and food, you can construct buildings that can grow crops and plantations, thus providing a somewhat infinite number of resources (although these buildings are expensive, and gathering rates at these facilities is slow). In addition to the simplified resource model, there are no drop sites, no need to build storage facilities, as the resources are gathered they are instantly added to your stockpile for use. It's a simple yet effective model, and really avoids the hassle of micromanaging peasants.

Gameplay is the real core of any strategy game, and Age of Empires III has got this down pat. Although the build we had an opportunity to try out was not yet complete, it really demonstrated the power of the new physics engine. I won't describe the basic gameplay model, it is practically the same as that used in every real-time strategy game in the last five or so years. However, Age of Empires III offers offer several significant improvements; I noticed a few of them while exploring the maps. For starters, when you select groups of units, they seem to automatically be placed into tactical formations, and all travel across the map at roughly the same speed. This means that your horseback elements will keep pace with foot soldiers if they are grouped into the same selection, instead of accidentally having two waves of soldiers. One of my other issues with the "classic" model was that once you had lost your main defenses, there was little chance of rebounding to make a comeback. You could try to create additional units, but the second they emerged one by one from the barracks, they were usually shot to pieces. Age of Empires III has addressed this issue, with the ability to create multiple units of the same type concurrently. You are able to queue up to five identical units for creation as a single element in the queue, and it only takes slightly longer to create five then a single unit. With five units emerging from the barracks at one time, you'll likely stand a slightly better chance of survival.

The introduction of trade routes adds yet another strategical element to the long-time series. On each map, there are one or more predetermined trade routes, indicated by dirt trails and native trading outposts. Along these routes are specially marked outpost construction positions, where you can build outposts to trade with the Natives for food, wood, coin, or simply experience points. The key with this is there are only a small number of available outpost positions available, and you'll have to fight your neighboring colonies for them. Trade outposts are essential to gaining a tactical advantage; they can provide much needed resources or experience points depending on which option you have selected in the outpost menu. As the game progresses, you have the option to upgrade the trade routes from your outposts, from carriages to stagecoaches, and finally to a rail network. As you upgrade the trade routes, you'll get a lot greater capacity, and more frequent deliveries, yet another advantage over enemy colonies.

You've all likely seen the screenshots released by Ensemble; we've got them in our gallery if you haven't had the viewing pleasure. Although we weren't permitted to take in-game captures from this build, the in game scenes really do complement the screenshots. Environments are absolutely gorgeous, lighting, shadows, and textures beautifully designed. Even though the version provided was unoptimized, the performance was surprisingly good, although you're going to need a high-end PC to max this one out. Buildings are highly detailed, and while building construction looks superb, destruction is even better. You'll see buildings crumble, mortars blow through individual walls, and flames burst out of roofs as the structures collapse. What is probably the nicest part of the new engine though are the unbelievable water effects. Waves ripple across the open seas and batter the coastline, and buildings and cliffsides cast reflections off the surface of the water. The screenshots don't lie; this is easily the best-looking real-time strategy game to date, and to think it's not even finished yet.

Sound-wise, the Age of Empires III is shaping up nicely. The soundtrack and voice acting are already spot on, and the sound effects are certainly getting there. The cheer of soldiers as they take down an enemy building, the shattering of glass as a building is torched, and even the sounds of swordplay are already superb, one can only imagine how the final release will sound.

Although the build we received was incomplete, it definitely offered a glimpse of what Age of Empires III is capable of, some of its new features, and a peak into the final release. Age of Empires III is truly shaping up to be the next-generation real-time strategy benchmark, and will likely live up to the unbelievably high expectations when it ships later this year.