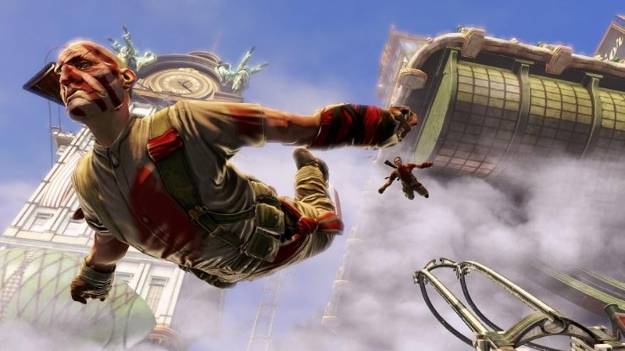 The first DLC revealed is entitled Clash in the Clouds and will focus mainly on combat. Players will be able to take on 60 challenges in four all-new environments as they use their Vigors, gunplay and skyrails to complete combat challenges.

The DLC will also come with Blue Ribbon Challenges that can be completed to unlock concept art, objects in the The Columbian Archeological Society, new Voxophones and new Kinetoscopes.

Clash in the Clouds will come with a leaderboard system allowing players to track their progress in the DLC and how they stack up against other players and will even come with new trophies and achievements to unlock.

Clash in the Clouds rolls out today on all platforms, but Irrational Games states that it may take a few days to reach all platforms in all regions.

The next set of DLC unveiled today will be story-driven and go more into depth on the game's ending as well as the first Bioshock.

Entitled Burial at Sea - Episode 1, the content places Booker DeWitt as a private investigator in the year 1958 in the underwater city of Rapture from the original Bioshock. The setting of the DLC will take place on the eve of Rapture's downfall into madness. Irrational Games states that the DLC will modify Bioshock: Infinite's gameplay to meld together the play styles of both it and the original Bioshock.

DeWitt will also run into his old traveling companion, Elizabeth, but based on the trailer it seems she is quite older and more mature and DeWitt appears to not know her.

According to Gameinformer, the first half will not have any combat and will have players exploring and investigating Rapture. The second half of the Burial at Sea will put players in the shoes of Elizabeth herself. Burial at Sea will also come with new weapons and new Plasmids/Vigors for players to toy with.

A release date for Burial at Sea has not been given at this time.

Both DLCs are part of the Bioshock: Infinite Season Pass, so if you already purchased that, you will not have to buy these two packs.