When the Ouya first appeared on Kickstarter.com, a site that helps people acquire funds needed to make some epic things into reality, it held a lot of promise. Android-powered games from the comfort of your home, using a console and your TV instead of a phone or tablet, with the ability to make your own games to boot. So how does it shape up?

The actual console is a small cube that easily fits into any adult hand. To set it up all you need to do is hook up your Ouya to your TV, hit the power button, and then follow the directions. It takes a bit of time to update and get sorted, however, the Ouya team were nice enough to provide load screens that quote funny sayings from your favourite geeky shows including Star Trek’s catch-phrase “arming photon torpedoes.”

Naturally you must have an internet connection to use the Ouya as all of its content is only available online. If you can’t connect, you won’t get much use out of it.

Once done you must set up your own account, complete with user name and password, before you can explore the Ouya. For the security-conscious, this can be problematic because to do this you must input your banking information (debit- or credit-oriented) in order to do anything. While I understand it must be input for when you purchase games, the notion that you cannot even look through the menu screen without it saved in the system isn’t the best way to start an Ouya-ship with players. Once done, however, you can explore the Ouya universe to your heart’s content. 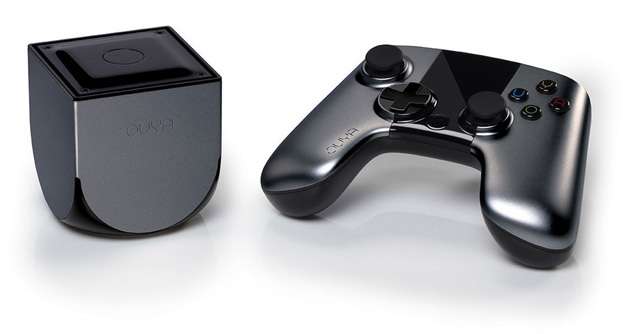 The Ouya has a few games pre-installed for your convenience, albeit they’re all demos and many will require an update before you can test them out. Unfortunately you can’t update games while playing the Ouya or browsing its menu items; you must watch the bar gradually reach the 100 per cent mark for the update to actually happen which gives you time to vacantly stare at the screen as you wonder why they didn’t think to avoid this obvious faux-pas in the world of gaming consoles.

The demos generally offer a few levels of play, or a small fraction of time, for you to test-drive them out. If you want to unlock the full edition, expect to pay anywhere from $4 for a user-made game to $16+ for titles such as the Final Fantasy series. In addition to big-name titles which include Sonic the Hedgehog and FF games, there are many user-made oddities that will have you laugh in disbelief at the zany antics, blatant rip-offs (aka “inspired” works), and overall bizarre choices that await you. From parallel parking a forklift despite very sensitive controls (a frustratingly fun adventure!), to a Portal-esque journey where you try to do, well, Portal-esque things to escape the Portal-esque world, there’s plenty of variety to choose from.

When browsing games it’s all too easy to purchase any one of them, thanks to your information being pre-entered when you set up the system. Two clicks on any title and it’s yours, complete with the corresponding charge on your card, making it easy for your jerk friends or susceptible kids to buy things on your account to your wallet’s discontent. Luckily the Ouya team realized this could happen and included a way to prevent this. There’s an option on their menu entitled Parental Controls which, if you ask me, is a poor way to describe this option as, traditionally, parental control is defined as a way to prevent certain mature titles from appearing on your account. For the Ouya, however, it’s simply an option to set up a pin code on your account, much like what you’d have for your debit or credit card, that requires it to be input every time you try to purchase something. Why they didn’t call it “Password Protect” or something to the like we’ll never know, but at least it’s there.

While playing I noticed the controls for the Ouya seemed off now and again but, to be fair, it could also have been the games that were played. Remember, many are user-made and as such can be very glitchy. The Portal-esque game has a glitch where your mind-numbing footsteps continue even when you’ve stopped moving and, when I’d shift my viewpoint to the right, the screen continued to glide even after I let go of the control stick. Others had minor glitches as well but when you consider they’re user-made, you should expect to encounter these now and again.

Control-wise, I found the actual controller feels kind of cheap. It looks fantastic and it’s obvious that, while somewhat inspired by Xbox 360 and Playstation 3 controllers, the Ouya team did their best to make their own variation of the two. Unlike the aforementioned controllers, however, I wouldn’t trust the Ouya’s to withstand an accidental drop to the floor without some major consequences ‘cause, let’s face it, it’s bound to happen. The silver part of the controller is actually where the batteries are kept, which means it’s relatively easy to remove. This in itself makes it more likely that the controller will “explode" into two pieces if dropped. In addition, the buttons seem to stick and I found the D-pad doesn’t always work the way it’s supposed to; it hardly recognized when I press “right” on it.

To be fair though, you’re able to use Xbox and PS3 controllers with the system as well, so long as the game permits it. It’s also great to be able to use these controllers as multiplayer games can be played without the need to purchase more Ouya controllers, assuming you already own an Xbox or PS3 anyway.

A really great feature of the Ouya, for the budding game developers, is the support they provide for you to make your own playable Android games. Once you set up your account, tutorials are available to you where they lead you through the process to make your own quirky (and probably somewhat glitchy) addition to the Ouya library.

After the initial several-hour playtime with the Ouya I have to admit the initial excitement waned and I didn’t feel much like picking it up again. It didn’t help that, when I attempted to turn the Ouya off, it refused to turn off as the box was hot to the touch and the fan was working double-time to cool down; while it’s great the fan refused to shut off until the unit cooled it left me concerned that frequent use of the system would burn it out that much quicker.

All this and everything else Ouya-oriented leads me to believe that it’s more of a hobbyist device than anything else, a toy if you will, akin to those mini arcade-game-in-a-controller doohickey’s that directly plug in to your TV so you can play your favourite classic games arcade-style, although with the option of downloading different titles.

Though the Ouya is a fantastic concept, it’s not something for everyone. Console-gamers will most likely grow bored of it while feeling frustrated at the limited access of gaming content and the glitches that come with many of them. Other gamers will most likely enjoy brief bouts with it now and again but nothing more. I don’t foresee anyone purchasing big-name titles on it, such as Sonic, when you can get the same titles for the same price through other consoles which provide a more fluid and responsive system. While it’s great exposure for Android-base games, aside from its $100 price-point, it doesn’t have the oomph it needs to surpass Android tablets and phones, nor does it have much of a defining factor that would make it a must-buy item when compared to other game libraries such as the ever-popular Steam.

Much like a remote-controlled helicopter, ignore the need to impulse-buy the new and cool gadget and consider the try-before-you-buy approach to see if it’s right for you. If it's for you, the Ouya is already available for purchase in a store near you.