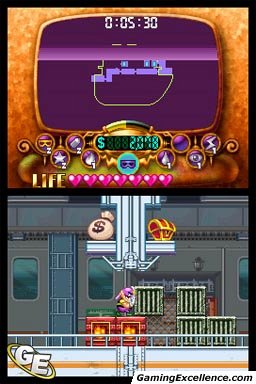 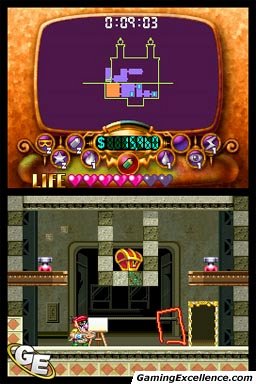 Wario is out looking for treasure in his latest escapade on the Nintendo DS, and this time he's got some help. Now in its fifth outing, Master of Disguise is unlike the collections of mini games that the Wario series has previously brought to the table. This adventure puzzler begins with Wario sitting on the couch (as usual), watching a TV show about a thief, the Silver Zephyr. His greedy desire is quickly shown, he develops a device to transport himself into the TV, and he steals the magical wand that allows the Silver Zephyr to transform into various disguises. Dubbing himself The Purple Wind, Wario constantly uses the phrase "silent but deadly" to describe himself - and yes that is a fart reference. The two thieves quickly learn of an object called the wishstone, which been broken apart and scattered around the globe. Wario commits to finding each of its pieces and putting the wishstone back together, this way he'll have all the treasure he wants (do you see a theme yet?). With ten episodes that will take you between thirty and ninety minutes each, you're looking at between ten to fifteen hours of gameplay in what is an incredibly frustrating but addictive experience.

From the outside, Wario: Master of Disguise is an adventure-oriented side-scrolling platformer, and a very difficult one at that. Traveling with your magical wand, Wario will unlock guise gems as he progresses through the chapters. These gems give Wario the power to transform into various creatures, and perform actions required to solve the various puzzles. For example, by applying the Genius disguise, Genius Wario can see hidden doors and pathways, but is virtually defenseless. Cosmic Wario carries around a laser and shoots enemies, but feels almost as if he's jumping in a low-gravity environment. Dragon Wario can burn through blocks and annihilate enemies, but his weight makes him difficult to maneuver around, and can cause him to fall through thinner platforms. The chapters themselves are overly long, a half hour per map is a bare minimum, and in some cases I was looking around for over ninety minutes to complete a single level. The frustrations in solving the puzzles are only compounded by the flaky control scheme and repetitive mini-games you'll constantly have to finish.

You control Wario himself by using the various buttons on the Nintendo DS; he can jump, move left or right, and duck. Everything else is controlled via the touch screen. You switch between disguises by drawing shapes on the touch screen (for example, to activate "Sparky Wario", you draw a lightning bolt). While it seems like a creative idea at first, the novelty quickly wears off. In many cases, you're required to switch between disguises on the fly (during boss battles, for example), and the imprecise nature of drawing symbols, as well at the limited ability for the DS to interpret these drawings can make the experience tiresome.

To obtain the various treasures and guise gems in Wario: Master of Disguise, you'll have to complete mini-puzzles whenever you open a chest. For the most part, these puzzles are completely brainless and extremely repetitive. Trace a picture with the stylus while not getting zapped by moving lasers, drag falling objects into their proper receptacles (one of which is a toilet, I'll leave the rest to your imagination), solve the sliding puzzle to put the picture back together, or my personal arch rival, a mini-game where you have to draw lines to guide a Wario head around a maze of sorts. The only mini-game I did enjoy was squashing the roaches with the stylus, and it's so trivially easy it's almost pointless. The problem with these puzzles isn't the fact that they're overly challenging (though coloring a shape with the stylus if you're in a moving vehicle is just annoying), its just that they are recycled time and time again.

The chapters themselves are pretty standard; you'll progress through fairly large maze-like levels solving puzzles to progress to the final boss. Along the way you'll come across a few baddies which you can dispose of using the attacks from the various disguises, but for the most part the emphasis is on the puzzle-solving. The puzzles themselves range from simple to incredibly complicated, and I do emphasize complicated. Rebound a shot off a series of walls with Cosmo Wario's laser to hit an orb, create a block using Arty Wario to depress a switch which unlocks a door, use Dragon Wario to light a series of torches, the puzzles are composed of many seemingly random steps. The bosses are also a challenge; in one tomb you're required to punch the flying pharaoh with Genius Wario's boxing glove, and then quickly drop down while he's stunned, switch to Dragon Wario, and light his shorts on fire, keeping in mind that quickly switching between characters is no easy task with the touch screen.

The problem here is you're looking at a bare minimum of thirty minutes per chapter, and in some cases I spent over ninety minutes on a single map. The game does offer save points as you progress through each map, but the maps themselves are simply too large and disorganized for a puzzler. In many cases you don't have a lot of direction as to what to do next, and it's very easy to miss a hidden door or pathway. For example, if you don't happen to have Genius Wario active, you may never see these hidden entrances or chests, and go scouring the level in search of an alternate solution. Fortunately the level maps do give you an idea of what rooms you've explored (and those that you haven't yet), but the various objects are so scattered about it's a long process to search every room. With the complexity of the levels comes an overly difficult game, the puzzles can be frustrating to solve, and I simply can't see a younger audience enjoying this one because of the high degree of difficulty.

In terms of graphics and audio, you won't find anything groundbreaking in this one. Wario: Master of Disguise looks pretty average with the levels themselves just varied enough to feel unique, and the background music helping to distinguish between them. The music as a whole is tolerable, as with much of the game though, it's very repetitive. Each level pretty much has one track that loops (and when the levels can take up to ninety minutes to complete, that's a lot of repetition). The sound effects are quite limited and you'll certainly grow tired of the pings and zaps as Cosmic Wario shoots his laser or the electrifying effect when Sparky Wario activates his charge. Given that, the biggest downside is the dialogue; it's so incredibly cheesy that you'll want to rip out your hair. Seriously cheesy. We're talking Steve Urkel cheesy here. Wario's insults are so horribly lame it's almost painful to read the dialogue.

Oddly enough though, with all the complaints and frustrations I've had with Wario: Master of Disguise, I somehow can't seem to put the game down. Its one redeeming quality is that it's so incredibly addictive. The controls are brutal at times, but the game is creative and enough of a new experience that it makes the game feel like something fresh. Unfortunately, once you're finished there really isn't much to do as the game doesn't have any form of multiplayer or cooperative play. It's an overly difficult and infuriating platformer, and with a little more polish, shorter and simpler puzzles, and a few tweaks Wario: Master of Disguise could have been a real success. As it stands, it's hard to recommend unless you're a true puzzle addict.