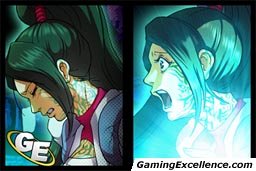 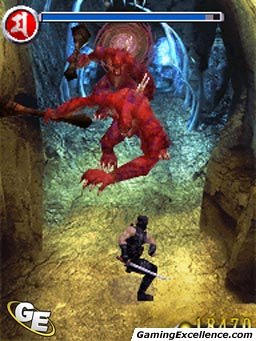 Ninja Gaiden has had a certainly controversial history over its life. It's always been an involving title, whether you're playing the originals or the more recent console versions. There may be some broken controllers involved, gnashed teeth, and possibly periods of extreme rage.

Now released on the Nintendo DS (with the clever name of "Dragon Sword"), it still keeps up its tradition of quality. Incidentally, if you've played the previous games before, you might know what I mean when I say that the ghost fish are back. Thankfully, so is the fun. The game begins six months after the Dark Dragon Blade incident, when Ryu, the big ninja in town, basically had to save the world. His village was rebuilt, people returned, and of course things went peacefully for some time.

Controlling Momiji, Ryu's student, you learn your way around the basics of the game, which I found pretty intuitive. Holding the DS like you would a book (vertically), you control the movements of your on-screen ninja using only the stylus, while every button on the DS is used to block. Press where you want to move, slide up quickly to jump, tap on enemies to toss a shuriken or fire an arrow, and slash to dice them into little evil-sized chunks. There're a wide variety of moves to digest, but since it's all quite easy to pick up, I was pulling of combos and tossing my enemies into the floor in no time as the female ninja. Then something happens, and you're in Ryu's shoes once again.

The stylus is also used to trace the 'ninpo' onto the screen. This ninja magic allows you to execute a variety of impressive and damaging attacks as you unlock each of them, but for all their pizzazz, I enjoyed the sword and bow much more. The healing spell was ever so useful, however.

Despite the wide array of abilities, things could get pretty repetitive from time to time. Each room you walk into spawns enemies for you to fight, and sometimes the number of enemies can reach pretty high, forcing you to fight each and every one before you moved on. There's some incentive for some of this, like being able to purchase upgrades with the yellow orbs you receive from downed foes, but there were times when I just wanted to move on instead of kill enemy after enemy after enemy in the same area.

The plot doesn't really factor in too much in how you play the game. You'll be running from point A to point B, doing a bit of the ninja thing along the way, and picking up the plot device at the end of each area after a boss battle. There are a couple secrets to pick up as you go, and though the unlockables aren't anything spectacular, it was fun to collect them. The fact that you required sound to find these unlockables was a bit of an annoyance, since I was playing my DS is public areas where most of the time I couldn't actually hear anything.

The graphics of the game gave me something of a mixed impression. The game works by having three-dimensional models of enemies, Ryu, and townsfolk displayed on pre-rendered environments. The environments look pretty good, and up-close, Ryu and his friends look good as well. However, much of the time is spent in a large room with a couple enemies on screen at once. At this point, everything is reduced to a small, detail-less black object on screen. While you can still see what you're doing (in most cases), it's unclear what exactly you're doing it to.

The boss battles, however, are pretty impressive, and rendered in full 3D, making them feel much more like actual boss battles and not just bigger, meaner enemies. In addition to these, the anime cutscenes between levels are drawn nicely and are thankfully much better then simple 3D models would have been.

I mentioned earlier the near-vertical difficulty curve of the Ninja Gaiden series, but it seems oddly missing in this title. Save points are scattered liberally (making this a great play-for-a-few-minutes title, I must say), meaning that a death would set you back maybe a few minutes. Even so, I made my way through the game dying only once, and that was against a boss that took me by surprise. Now, whether you take this as a good thing or a bad thing is up to you, but the game does have harder difficulties that can be unlocked if you feel like you need more of a challenge.

Ninja Gaiden: Dragon Sword is simply a fun game to play. It has some weak areas, such as the graphics or repetitiveness in some areas, but the polish of the title and the variety available in the moves makes up for a lot of it. It's a great game to play if you're looking for some intense slashy-ninja action, and a great debut for the invincible Ryu on the DS.