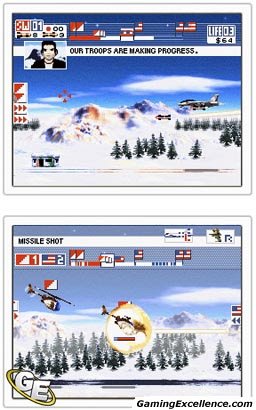 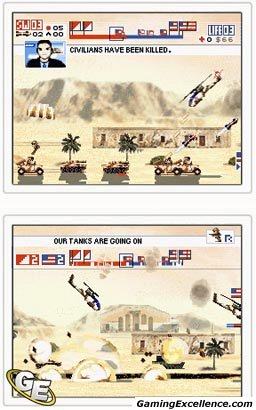 Glory Days 2 plays as a side-scrolling piloting action game with elements of strategy and resource management to keep your mind whirring. Each battle involves two sides (the generically named Union and Liberty) fighting for control of a battlefield. You, the player, control one pilot in a single airborne vehicle, either a helicopter or a jet, aiding the battle by shooting down other aircraft, bombing tanks and bunkers, and strafe-gunning infantry before they get too close. Your forces slowly trundle across the landscape towards your opponent's base of operations; with it's destruction comes victory, in most cases

The two vehicles used are necessary to your victory, for different reasons. The first is a fighter jet, and is quick and powerful, able to perform long bombing runs on tank walls as well as fire air-to-ground missiles to take them out easier. It's a little cumbersome to control however, and can't do much but fight. The helicopter is a completely different story, however. While slow, it's maneuverable, able to change height quickly and land at any location. This is very useful is picking up hostages to deliver back to base as well as transporting troops to the front line. The helicopters don't pack much of a punch, but do more assisting than just bombing enemies. The launch pad/runway for both vehicles is where you can restock on missiles and bombs, repair any damage, as well as switch between the two.

Most of the time, the purpose of each battle is to get your tanks from your base to the enemy's and then to promptly blow it up. To be expected, your enemy doesn't want you to do this, and will send their own forces to stop you. You can aid the war effort by destroying units and buildings (watch out, friendly fire does not help), but you're also given the ability to send out units of your choosing. There are few units, no more than half a dozen, but each of them have their advantages. The infantry can capture bunkers, tanks can take on other tanks, jeeps can take out aircraft, and so forth. Each requires a different number of resources, which are accumulated slowly by keeping bunkers under your control. If you want a little more, you can pick up some civilians using a helicopter; their safe delivery means a quick burst of resources to your pool.

Your bombs and bullets aren't the only weapon you have against the enemy. So called 'special weapons' allow you to send special units and artillery into the battle, but they do not come cheap, requiring you to have excellent accuracy with your bombs or rescue civilians before you get to use them. These weapons range from the immediately destructive, like the V2 Rocket, to the merely helpful, like paratroopers. While these weapons may not turn the tide of the battle immediately, they can help you get that edge that can push the enemy back, and it acts as another resource for you to manage and use at the right time.

The campaign of the game tracks three fighter pilots as they fight in their respective wars. There are sixteen missions in all, which makes for a fairly short campaign, and it really acts more as an extended tutorial to the rest of the game. Each mission begins with a letter being written by or to the pilots, which is punctuated by an extreme 'war is hell' theme. If the game wasn't as stylized as it is, this might be good, but instead, it feels out of place in a war where a single pilot can take on an endless line of enemies. Regardless, the campaign doesn't take too long to complete.

Where the replay value lies is in the battle mode, both single- and multiplayer. In this mode, you set the parameters of the battle, ranging from weather and location to the period of the campaign that the battle will take place at (depending on the period, different weapons and maneuvers are available). And then you can set up to how many pilots will be flying, and if they'll be controlled by the AI. The multiplayer (by wireless only) is just like this, only you'll be seeing your friend's fire at you instead of merely the enemy. This can get frantic and pretty enjoyable, but since the multiplayer doesn't offer WiFi, it's a tough goal to find more than a couple friends that own the game in the same area.

Controls tend to be a little hectic at first, and while most problems get resolved soon into the game, there are some issues that linger. The stylus, in particular, is difficult to get used to as a method of movement, and may result in the aircraft veering all over the place. While the control pad offers a more tightly-controlled solution, there are still issues with aiming and direction of fire. The audio of the game is worth mentioning, with some surprisingly symphonic war medleys playing as your aircraft flies over the battlefield. The voiceovers also help by telling you when your or the enemy's forces have captured a bunker. And, like mentioned before, the graphics are stylized to the point that the seriousness of the game is quickly removed. Your bullets look like large yellow rectangles flying across the screen, and the infantry appear like little cartoons trotting across the landscape. And while this may not fit with the theme of the campaign, it makes things easy to spot and notice instead of everything merging into one big blob of movement.

A fun action/strategy flight game, it's easy to lose a day or two in Glory Days 2. It's a little frustrating at times when it feels like your units are vastly underpowered compared to the opponents, but it makes it more satisfying when you finally defeat them. Still, despite the battle and multiplayer modes, it's unlikely this game will be able to hold your interest for too long. The level of strategy and action just isn't deep enough, and after a while, it just feels like you're doing the same thing over and over again as you cover the battlefield with bombs for the dozenth time. A quick and fun, though average, game.