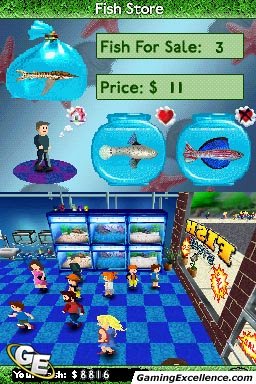 My favorite game as a lad was a neat little spin-off called Privateer.

Taking place in the then-relevant Wing Commander universe, Privateer made you a freelance space-pilot in an aging ship, willing to take any mission for the right price. As you made money, you upgrade your ship, eventually buying a new one entirely. This was a great way to add role-playing elements into a game while it slowly let you work your way through a series of story-driven missions.

You start off the game with a fish tank, fish food and some fish eggs. After a bit of waiting, your eggs hatch, and tiny fishies populate your tank. Once old enough, you can breed your fish and sell the resulting offspring for cash, which you use to buy a water pump to help maintain the health of your fish. Do it all again, then buy a snail to keep your aquarium clean. Wash, rinse and repeat, and you're playing Fish Tycoon.

Ultimately, your goal is to cross-breed all your fish so as to re-discover the seven "magic breeds" of fish lost long ago in a plot device no one really cares about.

So, like Privateer, Fish Tycoon gives you plenty of toys and upgrades to buy as a result of your hard work. While quite repetitive, the game offers plenty of stuff to work towards. It even gives you an ultimate objective to keep the game from being entirely masturbatory.

This leads us to the main difference between Fish Tycoon and Privateer. While one game has you fighting pirates in a space ship, the other one has you taking care of fish. I can appreciate how "blowing stuff up" isn't everyone's cup of tea, but please please please give me something cooler to do than literally watch fish grow.

By literally, I mean literally. The game is "real-time" in that the fish grow faster than normal, but still to slow for you to do much in a single sitting. Time continues to pass while the DS is in stand-by mode or even after it has been turned-off. There are no Nintendog-esque mini games, and zero multi-player.

Fish Tycoon has you opening your DS every hour or so to breed more fish, sprinkle some food or check how the Greenfin Spotanus are selling, but there really isn't that much more to it. There are settings to have time move at double speed, half speed or stop entirely, depending on your schedule and eagerness to play.

Personally, I tend to play my DS in one or two hour chunks, and forget about it the rest of the day. As such, my fish kept dying, and I'd have to restart my game. I could have adjusted my time settings to accommodate my busy days, or even played with the DS' internal clock to stop time from passing, but that's honestly too much work. I just wanted to play a video game, presumably one where I take care of fish.

If you can get past the fact you are playing a bona-fide fish-breeding simulator, and you have all day to keep checking on your profit-swelling fish babies, there is actually plenty to like about Fish Tycoon. The game features three modes of difficulty, and a strong tutorial to walk you through the introductory stages.

It is certainly the quite in-depth, with 784 fish to discover. The player can also spend money on research or advertising, plus there are a few items only uber-breeders will be able to enjoy.

The graphics show a fair amount of differentiation between different breeds of fish, and a good mix of 2D and 3D elements are used in the fish tank. The music was appropriate and functional, as were the various sound effects. A screen saver mode lets proud breeders keep their DS open on their desk, showing off their personal aquarium to any who might happen by.

The controls were simple and thus spot-on. The game makes good use of the stylus, with light use of the D-pad for exploring your fish tank.

This would be a great buy for someone who goes everywhere with their DS, and loves casual games they can play for five or ten minutes here or there. While I'd normally be happy to recommend this title for anyone who liked Nintendogs, it's hard to become emotionally attached to a box of fish (versus a fluffy puppy), and you really do need to care one way or the other about these animals. I've explained the game, and ultimately, if it sounds like something that would appeal to you, it probably is. For the majority of gamers, however, Fish Tycoon would likely "float to the top" and get "flushed" after only a few hours of play.