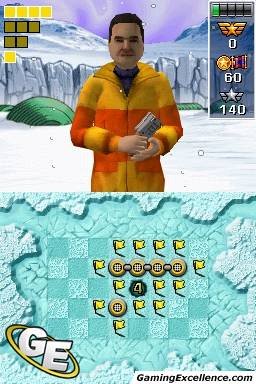 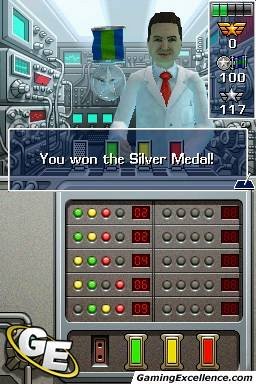 The "World Famous" Reiner Knizia invites you to tour the world visiting sixteen cities and unlocking puzzles as you go in Eidos' latest puzzle game on the Nintendo DS. Brain Voyage is the latest in a series of "brain building" games on the handheld platform, but how does it compete against more established franchises?

The game offers up several modes of play, In "World Tour" mode, a player chooses cities and levels based upon the amount of funds available. The reward for being successful is a medal (bronze, silver and gold) and coins. The better the performance, the better the reward. You start out with a selection of twelve cities, and can unlock the remaining four cities with your coin collection.

The puzzles themselves are quite simple in nature and many have been re-furbished from old classics such as Memory, Minesweeper, Mastermind, Spot the Difference, and Mazes to name a few. The more interesting puzzles were the mathematical and logic based mini-games. To name a few, Brain Voyage features a poker puzzle that is very similar to Solitaire in Vegas. Cards are dealt and must be placed in a grid making the best hands to score points, both vertically and horizontally. Another puzzle, Carnival, is reminiscent of Yahtzee, where you allocate dancers into parade floats depending on their number, trying to score the most points for the numbered combinations. The significantly more challenging brainteaser had to do with making an equation equal to zero through addition, subtraction, multiplication and division. Given I'm not particularly good at math; I did find this to be a bit of a challenge, though not necessarily an enjoyable one.

You can repeatedly try the same level of difficulty and never succeed at getting a medal winning score. Eventually, Reiner will take pity upon you and offer a few coins for perseverance. As you progress through the game and build up a nice collection of coins, you can unlock cities unavailable at the beginning of the game. As to be expected, they are quite pricey and will take a significant time commitment to open up them all.

Unfortunately, if you get stuck in a puzzle, there are virtually no hints available, and if you need instructions again you'll have to restart as they are only presented at the beginning. With that said, the entertainment value of the puzzles and brainteasers is quite low. These games have been played before and played better in board form, without a new twist the drive to continue playing is reduced. Spotting differences between two images and the mazes felt very similar to the entertainment gained from paper placements given to children in a restaurant. Not very difficult, and just about as entertaining. And sadly, the maze game reminded me of cleaned up graphics from my Atari days.

The graphics in Brain Voyage are mediocre, and not particularly interesting to observe. At first I thought the Reiner Knizia character looked odd, until I looked up a photo of him online for comparison. If you're not doing well Reiner will empathize by throwing a hissy fit, pounding on the desk in frustration, or getting electrocuted in the corner of the screen. Sadly, the pure evil in me forced me into failing several times in order to see Reiner get zapped. I blame this on boredom.

Brain Voyage offers up a couple of other options, a Puzzle Bank where you can save and replay old puzzles, and Download Play which allows you to share puzzles. Unfortunately, with a lack of head-to-head mode, sharing puzzles is pretty much pointless, and about as entertaining as watching paint dry.

The Nintendo DS has other logic games in its repertoire that are more exciting, stimulating, and feel more like a complete package. Brain Voyage does not track cognitive improvement and I do not feel smarter for having played it. Combined with the mediocre graphics and uninteresting collection of games, Brain Voyage is likely a not worth your time, even if it's in the bargain bin.