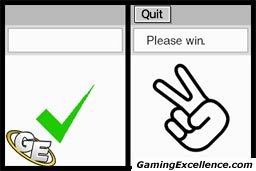 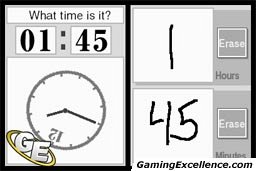 Brain Age 2 is the sequel to the bestselling Brain Age. Developed and published by Nintendo for the DS, it is a highly addicting grouping of mini-games and sudoku puzzles. The game encourages you to play a little bit every day in order to improve your "brain age". The best score you can get for your brain test is 20, which is supposed to signify that you are as quick-thinking as a twenty-year-old.

Well, I can think of some, in fact, many twenty-year-olds who aren't quite as bright as the Floating Head in the game says they should be. Probably because they're out drinking and thinking about other things than how fast they can solve a sudoku problem. But I digress…

The game takes advantage of the DS layout with the stylus and touch screen, and works well for both right- and left-handed players. Once you start, you find your brain age and then take three tests daily to improve your brain's performance. After each short test, the Floating Head (modeled after Dr. Ryuta Kawashima, the game's creator) gives you a tidbit of information about the brain, and some activities you can do to help keep your brain sharp.

There are several game-tests to play, which range from addition problems to word problems to playing a song on the piano. The games are really geared towards math problems, so if you're more of a right-brain than a left-brain person, then you might be left feeling frustrated without an outlet to showcase your impressive spelling and language skills.

Luckily, you can practice the games as much as you want, after your daily test is done. The game unlocks more tests and features as you progress, and eventually you'll have more choices and higher difficulty levels to play with.

The game's background music is pleasant at first, but, like with most games, grows tiring and annoying rather quickly. Turning the volume down is always an option - but don't forget to turn it back up for games like Piano Player! The visuals and layout are fairly straightforward; pretty much what you'd expect and nothing special. They serve their purpose, but don't go above or beyond.

During the course of your daily brain-training exercises, you'll encounter many different mini-games. Most of them are math games, like Change Maker, where you are given money and told to make change. So, if you're given a ten dollar bill, you'll see a total of $7.32 on the cash register. It's up to you to figure out what the correct change is ($2.68), and give it to your customer using pennies, dimes, nickels, quarters, and one-dollar bills.

There are also creative games like Piano Player, which will come easier if you can read music or have ever played piano before. This mini-game gives you a song to play, and you get points for your notational accuracy. The highest score you can get with all correct notes in 95 points; to get a higher score you need rhythm. Other games include Word Blend, where you have to unscramble the letters to make a word; Serial Subtraction, where you keep subtracting the same number again and again from the hidden sum; and Calendar Count, where you have to answer questions such as "What day was it two days after three days before yesterday?"

The games range in level of difficulty - it depends on each individual. If, like me, you can't count to ten without using your fingers, you will have some troubles getting good scores on the math problems. But you'll probably whiz games like Word Blend, and vice-versa. There needs to be a more proportional amount of language puzzles to math puzzles.

Brain Age 2 has a separate section where you can play Sudoku games without really being tested. You can change the settings and compete against yourself, or others, with the timed mode, or just enjoy it without the competition. The sudoku games should be matched with a wordsearch puzzle of some kind, so that us non-mathies have more to do. It's too bad that I'm not particularly good at Sudoku.

Overall, the game is a pretty good buy. You'll eventually get addicted to the puzzles, and you'll probably enjoy the mini-games before the game, like the Connect the Dots puzzles. Also, there's enough unlockable content to keep you playing for weeks. I'm looking forward to playing Brain Age 3 - hopefully my math skills will have improved by then.