Bleach: The Blade of Fate (DS) 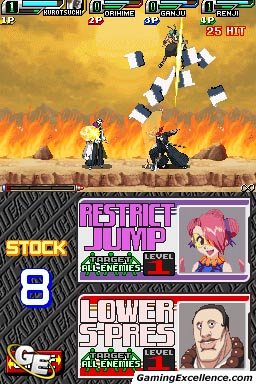 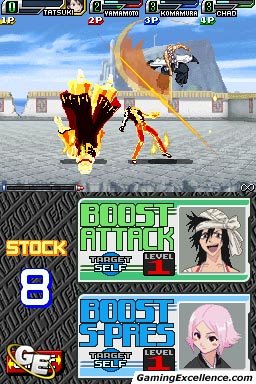 To those not up to date on their anime, you may think that think Bleach is a chlorine solution used to whiten fabrics? While you may not be completely wrong, Bleach is also the newest hit anime to storm North American television, manga, and other forms of entertainment. And, unlike most anime video games, Bleach: The Blade of Fate turns out to be an enjoyable experience that provides plenty of fan service to Bleach aficionados while still appealing to the aforementioned newcomers.

Bleach is a tale about a teenager named Ichigo who accidentally gains the powers of a soul reaper, whose job is to purify the souls of dead spirits. The Blade of Fate takes you through episodes of the show where Ichigo and his friends have to save Rukia, an ex-soul reaper who is sentenced to death after giving her powers to Ichigo. The story is told through interactions between characters in between fights, where there is a still image of the character talking, and text being displayed as their reactions change from picture to picture. While the story mode doesn't really delve too deeply into any of the characters backgrounds, it does offer enough reason for you to fight with the character you are talking with.

The story mode is just like any other 2D fighter, you have a few lines of dialogue between characters, and then you fight. There is a story mode for most of the characters, and even though a few of them only have a handful of battles, they are a good way to learn how that character handles. It's also great for fans who will recognize certain battles, and will enjoy playing as some of the more minor characters. Although some times the AI can resort to using cheap combos, it is often pretty smart and will provide for some pretty close battles.

The controls are tight and responsive, with three of the four face buttons providing light, medium, and heavy attacks, and the last button doing a move called "flash step", which allows you to do a quick teleport like dodge which you can use to get behind your opponent quickly. The flash step keeps the action faced paced as characters are often dashing all over the stage. Characters can also jump to heavenly heights, and exciting air battles always keep the fighting fun.

Combos, like every fighter, are done through a series of directional buttons and pressing any of the attack buttons. These combos aren't difficult to pull off; including the super powerful "bankai" moves which even warrant a short cut scene when pulled off. The simplicity of the combos keeps the action moving quickly and are rewarding without having to resort to the difficulty of some other fighters. Treasure, the games developer, even added an easier way to do combos in the form of the touch screen. All you have to do is simply tap the screen and your character will do the combo it is linked to. Although this may seem like a way Treasure tried to implement touch screen features, it is really an unnecessary addition. I came across a few players over Wi-Fi who I'm sure were just mashing their touch screen, as they were just doing the same combo over and over again without moving their character.

The touch screen also introduces spirit cards you can use during a battle to strengthen your character or weaken your opponent. Like the touch combos, however, it's awkward trying to touch the screen with your stylus as your using both your hands to play (unless you use your finger, I guess). There are over 100 cards in the game, and a whole mode where you can construct your deck. It's a neat addition to add depth to the gameplay; however, a lot of players online don't bother using them, as they don't have offer drastic changes to the gameplay.

Though the several storylines will keep you busy for a while, the real length of the game comes in its multiplayer. The Blade of Fate offers plenty of multiplayer action that will keep you busy for hours. The game offers single card download play if you want to play with your friends that don't have the game, or you can play multi-card if they do. Don't have any friends? No problem! Blade of Fate also has full Wi-Fi functionality, allowing you to play with players across the world, using either friend codes or playing with random people. The game handles well online with little to no lag and game searches don't take too long.

Up to four players can play together in a match both online and off. To keep from the action getting too jumbled in a tiny 2D plane, Treasure added a unique feature that allows character to "jump" to another part of the stage. This adds quite a bit of strategy to team battles, as characters can jump between planes, causing a certain character to be double-teamed for a while, or tricking opponents to switch planes while you attack. It's a simple idea that is enforced well and gives the 2D fighter a breath of fresh air.

Graphically, The Blade of Fate is nothing short of stellar. The sprites look great against the 2D backgrounds, and move and animate flawlessly. The special attacks look great, and the camera even has to zoom out sometimes just to get all of the action in on the screen. There are absolutely no frame rate issues, and everything just looks fantastic. It also sounds pretty good too. The soundtrack has plenty of rocking songs to fight to, and the actors of the anime voice all of the characters. Although they only speak during combat, it is nice to hear the actual voice actors calling out their attacks. The sword attack sound effects can get kind of repetitive at times, but other then that, the audio is pretty spot on.

Unless you've imported the Jump Superstar games from Japan, the DS has been pretty starved for a good fighter. Enter Bleach: The Blade of Fate. The game delivers great gameplay and superb graphics with plenty of single player game modes like arcade, versus, and challenge. Add in a plethora of multiplayer options, and you've got a great game that will appeal to fans and strangers of the Bleach franchise. What more could you ask for in a pocket fighter?