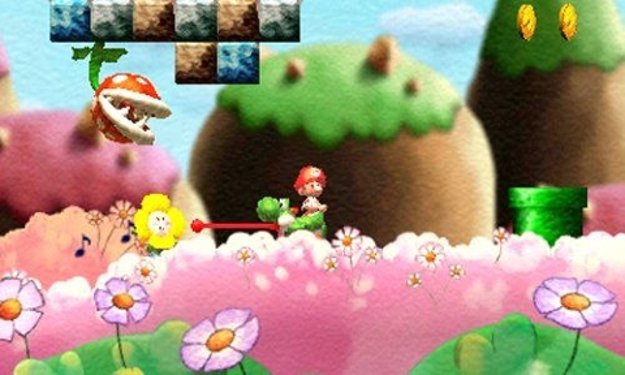 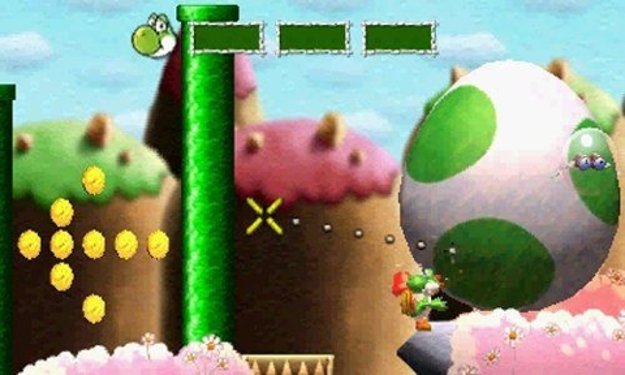 Super Mario World 2: Yoshi’s Island still holds a place in my heart as one of the best Mario games ever invented. Its art style was cute and changed up the gameplay to what we were accustomed to in a traditional Mario title. With Yoshi’s New Island, we get a revamped version of the original that is just right for a new generation of young gamers.

If you played the original title, then you should feel right at home with the controls as it is almost a mirror to its predecessor. Yoshi still swallows nearly every enemy he encounters and turns them into eggs to use as ammunition against other foes. With the addition of giant enemies that can be turned into enormous eggs, it gives a whole new level of Yoshi’s destructive power and even a new means of platforming for Nintendo’s favorite dinosaur. The new feature of Yoshis changing into different vehicles also brings a change to gameplay. During the campaign, Yoshi can enter rainbow-colored doors and transforms into things such as a hot air balloon or a mine cart and by tilting the 3DS, players maneuver him through a stage where he can collect additional coins. These stages are a fun diversion from the main stage progression and serves as a chance for players to farm additional lives. There are also sections where the Yoshis can collect star powers that also give them the ability to run on walls and ceilings as they collect coins. These areas are very fast-paced and will have players darting to and from walls and ceilings at breakneck speeds.

While the story does serve as an official sequel to the original Yoshi’s Island, it has a quite similar progression. After the Yoshis defeated Baby Bowser the first time, we saw in the closing credits of the Mario twins being delivered home. Apparently it turns out the stork gave the babies to the wrong parents. After quickly scooping them up again, Kamek once again tries to capture the twins but, SURPRISE, only manages to get Baby Luigi while Baby Mario plummets down to Egg Island, inhabited by the Yoshis. The creatures once again agree to take turns carrying the child in an effort to rescue its twin. This may be the great downside to the entire game. We are given that it is a new island, but the plot and plight is still the same. Even a certain boss battle and words spoken by said boss is essentially the same rehashed version of it. It seems a bit lazy by developer Arzest.

And boss battles are quite entertaining, but still quite kid friendly for a younger generation. Bosses are broken up by a battle with the wizard Kamek and a big boss battle at the final stage of a world. These encounters, which you will face spaced over 6 worlds, are very entertaining. The battles are a bit of a mindbender at first, but once you find the right way to attack a boss, will be over rather quickly. I was quite impressed with some of them. 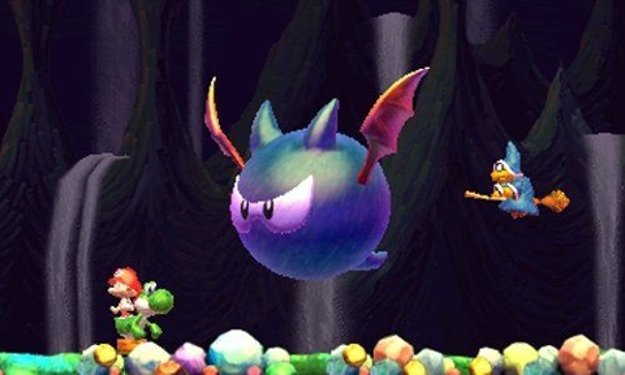 This title is indeed for the kids of the family made quite apparent by its art style. If the original game looked childish, then this one is downright infant. Everything from its chalk-colored characters and backgrounds to its music screams for the kids. Even the opening music sounds like a melody of squeak toys. It is all rather cute and invokes the child in you when you are treated to Yoshis celebrating at the end of a level. Even the enemies don’t come off as menacing as most of them have a smile on their face when you are up against them. The art style and music presentation greatly matches what the developers where trying to convey to its players.

If there is a glaring downside to this title, it probably comes from its multiplayer component that has you and another player partake in mini-games that include popping balloons in an allotted amount of time or fluttering to collect coins. This addition seems rather pointless as these mini-games don’t even have the players competing to see who gets the higher score. It just adds the total number of coins you collected and balloons you popped into a single score and registers it as a high score. If that is all it does, why not just make this a single-player activity? And each mini-game ends with it telling you “That’s it.” and I felt that way at the end of it; that’s it. That is all I get.

Yoshi’s New Island comes off as a way of passing down a great Super Nintendo game to a new generation. In a way, it comes off feeling something akin to the Muppet Babies. It is the same lovable Muppets your parents perhaps remember watching every night on television retooled for a younger generation to show just how great these characters are. The art style and music choices complement this 3DS title greatly and the controls are very intuitive and tailored rather well for a younger audience. However, it would be okay if you perhaps just skipped the multiplayer offering they have. Any parent with fond memories of the first one should definitely pick this up for their children or perhaps pick it up for yourself to relive glory days of a console gone by.