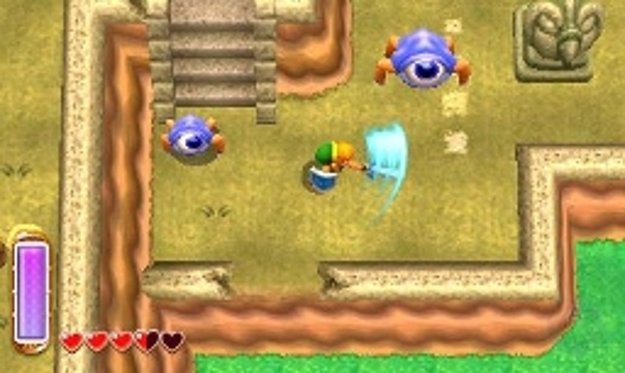 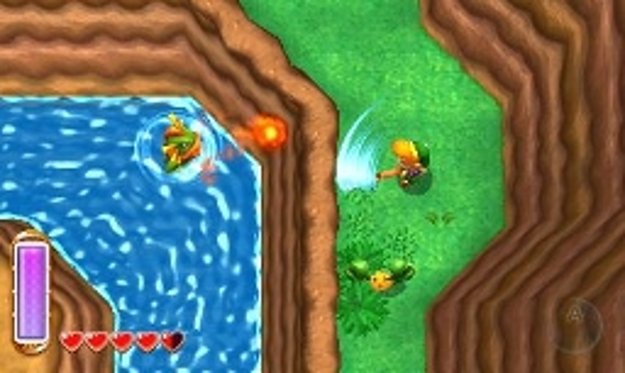 Nintendo has created a true successor to A Link to the Past with their latest 3DS Zelda title. Not content with just giving us another HD remake, we finally are getting treated to an all-new adventure for Link. However, thankfully it is set in a world we grew up with and have adored for ages.

A Link Between Worlds combines new and old gameplay from what made us love A Link to the Past. We get a top down Zelda title that pays tribute to the console that made the series a legend and we get new powers that add a whole new level to solving puzzles.

During the demo, we were set up in the field right outside Link's uncle's house where his first adventure began. Link still has what appears to be the Master Sword as a full tank of hearts sends a ray out of the tip of your sword to hit enemies at long range. After wandering around the overworld for a bit and battling off knights and Octoroks, we found an entrance to a dungeon. Inside, it had the distinct feel of the 3rd dungeon from A Link to the Past. Barriers blocked your path and hitting crystals and making them change from blue to red lowered same colored barriers while raising the opposite color ones. Normally these would require a new item to some how trigger them from afar, but Link now has a new power to help him circumvent that problem. Link can now travel inside walls that turn him into a 2D drawing that can traverse through was was once unreachable paths. A treasure chest sitting out of reach thanks to bars on a window? No problem. Go into the wall and easily slip between them. Need to get to another side of a room and no bridge in sight? Go into the wall and use it as the bridge.

Also thanks to the technology of the Nintendo 3DS, the dungeon had a sense of verticality that was never felt before. I didn't have to find stairs to go up a level. Now with giant pegs that can be pounded down with the trusty hammer, I could step on them and be launched all the way up to the next level with no difficulty. Standard enemies such as Stalfos and Mini-Moldorm still filled the dungeon, so you won't just be walking on walls to solve problems. Sometimes a sword-bashing is still just as effective.

Nintendo has definitely recognized the type of players that will be playing this game. Even though this game in on the 3DS, we won't have to use things like the stylus to move Link and make him attack. Nintendo really wanted this game to feel like you were playing A Link to the Past, so thankfully using the the buttons and control pad will be the controls utilized throughout the game. Using the stylus for everything in such a game like The Phantom Hourglass made the whole experience feel like a gimmick more than exciting new gameplay and returning to the bread and butter of the series is a welcomed sight.

It is still unknown at this point what or who gave Link these wall-merging powers, but I am quite eager to find out come November of this year. If you still are on the fence on whether to get a 3DS or not, let this be the game that convinces you.