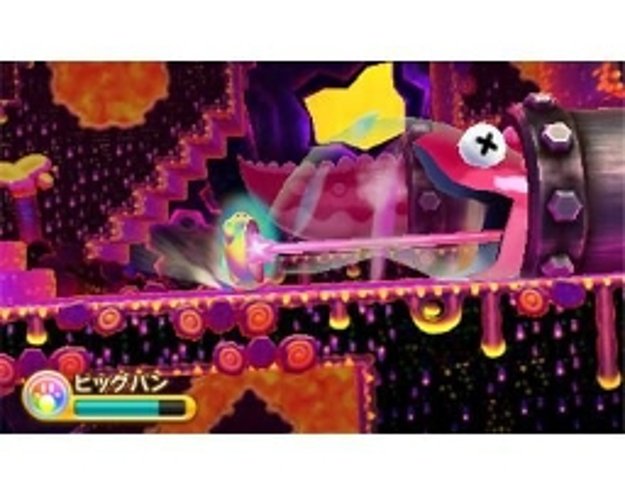 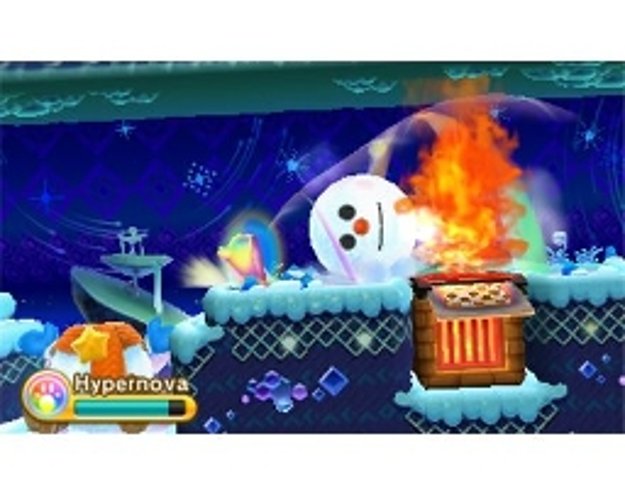 Kirby has always been a loveable character for Nintendo. His adventures seemingly amount to a very colorful silent protagonist adventure where the most talk you get out of him is when he waves at you with his signature “Hiiiii!” Yet even with his silent nature, he still always seems to bring a smile to your face. His debut on the Nintendo 3DS is no real difference. Kirby: Triple Deluxe is a game that uses the system to its fullest.

Kirby is a character that never really holds a grudge. He just likes saving the day, even if it’s an enemy. That’s how his adventure starts in Triple Deluxe. Kirby goes to sleep one night and a giant beanstalk called the Dreamstalk decides to grow under Dreamland and decides to take Kirby’s house up into the clouds. When he goes to King Dedede’s castle he notices a caterpillar creature has kidnapped the King and Kirby decides to chase after them up the stalk.

Triple Deluxe is a classic Kirby adventure, but with its placement on the 3DS, HAL Laboratory has crafted an adventure that utilizes the 3DS to its full potential as Kirby will be moving from the foreground to the background in seamless fashion. While he navigates the terrain, he still must avoid attacks and overcome obstacles from both planes. One such example comes into play when Kirby travels to a haunted house and while walking in the foreground of an environment; it is the mirrored background that actually has the true landscape that Kirby is traversing. This aspect is perhaps the best use of 3D I have seen the system use by far.

But what makes Kirby really enjoyable is his signature copy ability and the Dreamstalk is filled with many enemies to be sucked up and their abilities copied. New copy abilities are presented in Triple Deluxe such as the Bell which gives Kirby two hand bells that allows him to relentlessly pummel his opponents with sound, and the Archer that gives him a bow and arrow allowing him to shoot in any direction. Triple Deluxe allows employs the abilities in its puzzles as you will have to tilt your 3DS left and right to turn dials and use the correct ability at the opportune moment. While these new abilities are fun, I did find myself returning to the staples such as the Fighter, the Sword (which seems to have been nerfed a bit since Kirby Super Star) and the Hammer. Still, it is the plethora of abilities scattered around the game that will have you dropping an ability as quickly as you pick a new one up.

One new aspect to Kirby’s other signature ability, the vacuum, is the introduction of the Miracle Fruit that puts the character in a Hypernova state where his sucking power increases by ten-fold allowing Kirby to not only suck up many things at once, but also swallow environments and change landscapes while in this state. The best use of Hypernova, however, probably comes in the landscape changing as Kirby will use it to progress further in a level or even solve puzzle. One such occurrence came during a snow level where Kirby has to use his Hypernova ability to attack snowmen’s heads to their bodies. It isn’t straight forward as Kirby will have to avoid such environmental hazards that can hurt him and even melt the head. At the end of the level I had to attach a mom and dad’s head back onto their body for a reward. While getting it right the first time, I decided to play the stage again and mix them up to see if anything new occurred and to my glee the two snowmen frustratingly sulk off into the foreground. It is this aspect alone that illustrates that HAL Laboratory indeed had an enjoyment placing it in the game and felt that players themselves would get a laugh out of it as well. 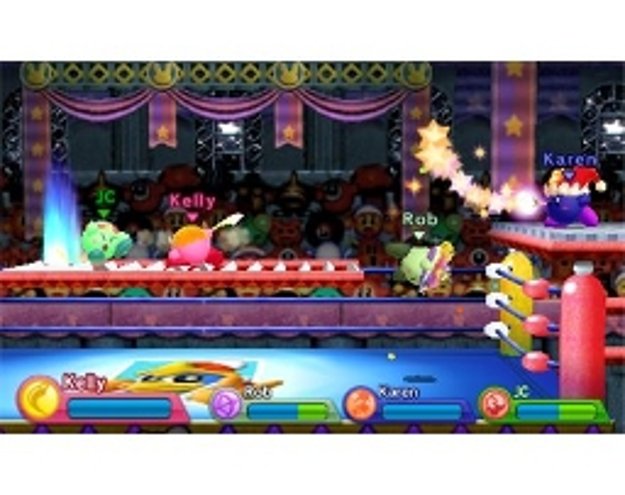 Triple Deluxe also had a multitude of collectibles. Scattered throughout levels are key chains that highlight Kirby and enemies throughout his video game history. Also within each level is a collection of Sun Stones. After a set number of them are collected within a stage, the boss room opens up but if the player is skilled enough to collect all of them, an extra level opens up. This not only adds to the collectible side of a player, but also adds to the replayablibity as the most determined players will make sure to collect every single Sun Stone.

To prolong the game’s life, Kirby: Triple Deluxe also comes bundles with two minigames. Kirby Fighters is a Super Smash Bros.-type brawler that has Kirby utilizing his offensive copy abilities to duke it out with other Kirbys while Dedede’s Drum Dash is a rhythm-type game that has the king rhythmically bouncing on drums while avoiding obstacles on both screens. These don’t really seem to add to the story, but they are fun little minigames to mess around with for a bit.

Kirby: Triple Deluxe is a wonderful platformer on the 3DS. It has a fun feel to it and has the best usage of the Nintendo 3DS I have ever seen. Nintendo’s little pink gumball is worth any fans time.