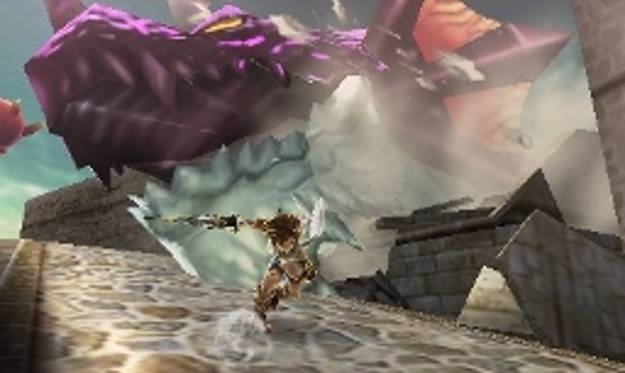 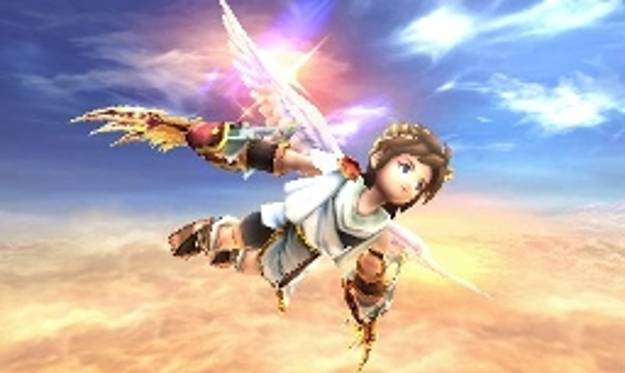 When Nintendo recommended I try Kid Icarus: Uprising for the 3DS, I thought it would have the same impact on me as the original NES game from the 80s, and by impact I mean not much of one. I was pleasantly surprised, however, to see that it not only is much of something, but it stands out in a very good way.

For starters, Kid Icarus: Uprising is just plain pretty, both with and without the 3D enabled. It uses both screens in an effective way, with the top screen showing the constant action and the bottom showing dialogue between characters in the game as per Phoenix Wright style. It keeps your eyes occupied, and the opportunity to enjoy the story via the bottom-screen hi-jinx, without feeling overwhelmed with the idea that both screens have different things showing at once.

From what the demos showed the action is pretty much non-stop, with each level starting as a rail-shooter in the air and actual on-foot game play for the second half. While rail-shooters aren't everyone's favourite method of play, when you're fighting in the air it's almost necessary; enemies of varying sorts are popping up all over the place, leaving you too busy with aiming and destroying those targets to bother with your having to control your flying on top of it.

With that said, KI:U is not a simple and easy game, it's actually quite challenging. You're constantly adjusting how you approach different enemies in real-time, based on the different ways they attack you, and if you don't plan things right then you'll fail. Even on foot, you're running around, exploring and finding treasure in a Legend of Zelda fashion, all the while encountering enemies who are none too happy to see you. According to the Nintendo rep supervising the demos, very few people could even get halfway through the level within the 5 minutes of demo-play everyone was allotted. (I am happy to say I was one of the few who got beyond the halfway point!) Mind you, I'm sure if those same people were given more than 5 minutes to get familiar with, and to play, the game, they'd be able to swoop right on through.

Each level is timed, which at first I wasn't too keen on, but it does add to your need to succeed. You start with a set time and, depending how well you play, more time is added on as you beat enemies and find bonuses. Essentially, the better you are, the more time the game rewards you, like giving a puppy a treat every time it's a "good boy/girl"! Even those who aren't very good will still be rewarded time with each successful action, which can't be avoided as you play the game anyway since you must defeat many foes to proceed. Those who become experts at the game will simply have a bit more breathing room.

At the beginning of each level you're given the choice of which weapon to use for your adventure. Whether it be a bow & arrow, magic, your own two hands, or one of the many others to choose from, you get to change your approach to the game, which also changes how challenging the game becomes. On the weapons screen a brief summary of the pros and cons of each choice is shown, giving you an idea of what to expect going forward with your choice.

The controls are simple, though awkward at first. You use your left thumb on the D-pad and your left trigger finger to shoot, the turning and aiming are done with the stylus. If you want to turn you need to sweep the stylus a certain way, which is similar to, but not the same as, the way you aim. After several minutes of playing around you do eventually get the hang of it, and it does work well so long as you don't panic when fighting a boss and swish the stylus around on the DS screen in a panic.

In addition to the single-player mode, there's a multi-player mode you can choose to play. Once again you choose your weapon, then you're sent into battle on one of two teams with other live people who're playing. Your goal is to kill off the other team one by one, who re-spawn for a while until a 'black devil' is randomly chosen on each team. Once that devil has spawned, your team must be the first to kill the enemies' devil in order to win. Sounds simple enough, and it is, but again you're using any weapon of your choice, and you're playing with others who're real people and have more ability to fight than any A.I. enemy. All in all, a fun challenge.

Another neat feature they showcased utilizes the camera on the 3DS. It's completely for fun, you don't ever have to use it but it's enjoyable nonetheless. If you collect Kid Icarus: Uprising cards and hover the DS over the picture so it shows on the screen, a 3D rendition of the character will suddenly be standing on the card. What's more, if you have the bottoms of two character cards touching, and you press a button, they will fight on-screen in their 3D form. You can't control how they fight, so the results are unpredictable, but again, it exists just for fun.

Overall I was very impressed with Kid Icarus: Uprising. It's visually appealing, the story and character banter is both amusing and fun, and the game-play is challenging while remaining enjoyable (and playable). While I admit it wasn't something I had initially thought about seeing at E3, I'm now looking forward to when I can get my hands on my own copy. Gamers can look forward to bringing their DS-exclusive Kid Icarus: Uprising home for the 2011 holiday season.