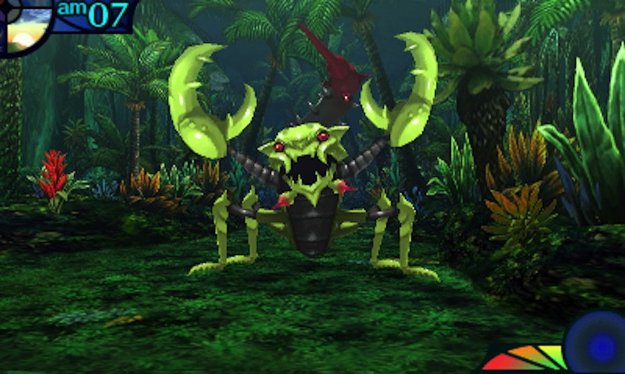 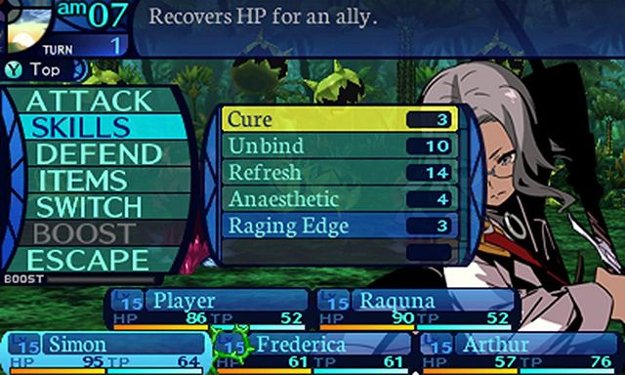 If there’s one thing that can be said about the Etrian Odyssey series is that it sure as hell knows exactly what it is. It is balls to the wall, rocket to the crotch difficult from beginning to end and that’s just how the fans like it. However the series has begun to really reinvent itself thanks to adding in options to draw in more casual players while still keeping that harder difficulty for those willing to stomach it. But this is just part of a strange difficulty curve to the series itself: Etrian Odyssey III was the height of inaccessibility for the less hardcore but they really reined it in with the fourth entry, adding in more options to reduce the difficulty while rewarding players for looking deeper than just the surface. Now we’ve turned back to Etrian Odssey 1 and we get to see how the guys who made the games have evolved the series.

The greatest change is the addition of story mode, bringing full-fledged characters and cutscenes to the game. Your point of view character is the Highlander, a versatile and deadly warrior sent to Etria to investigate the Yggdrasil Labyrinth due to the mysterious tremors troubling the land. Shortly after arriving you are sent to investigate some ancient ruins whereupon the Highlander meets up with the mysterious Frederica, a Gunner, and a trio of adventurers from another town: Simon, the sword-wielding medic, Raquna, the perky Defender, and Arthur, the rambunctious Alchemist. 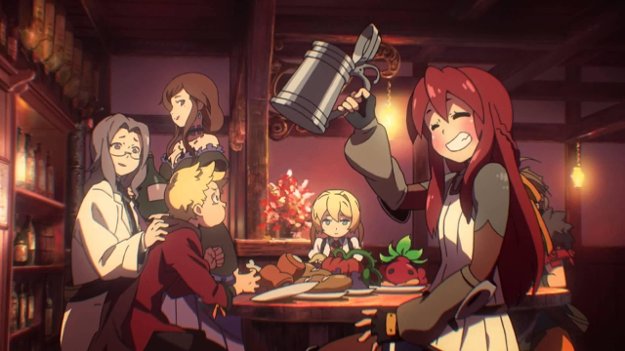 Having this set party is rather interesting since it brings life to the game but it has both its own pro’s and con’s. It’s great because this gives you more exposition via conversations between characters which greatly helps to clarify some plot issues that were not explained clearly in the original. It also gives you a pretty damn good party for beginners. Unfortunately this party locks you down into these set characters.

There are many points where you might want to temporarily swap in a Survivalist to harvest some goods or a Dark Hunter to properly bind or inflict status ailments on a difficult boss. Some people prefer to build specialized characters to exploit weaknesses effectively rather than forcing their party members to be able to do everything with minor success. It’s not an issue all of the time but whenever you hit a boss where you realize that your party is woefully unprepared to deal with it you find yourself to have very few options except to go “Rest” your party members, lose the two levels and re-allocate all of your skill points. Then you can do it again the next time the issue crops up.

To address this issue for both story mode and classic mode (the mode similar to the original EO1) they have introduced Grimoire Stones. These little trinkets can be equipped to give your character access to skills he might not normally have. Simon, the medic you use in story mode, starts with a Landsknecht Grimoire Stone which allows him to use swords as well as a few skills from that Class. Want your Defender to use Dark Hunter skills and whips? You can do that too. Want to give your Gunner a few skills that he doesn’t currently have? Can do that too. Sounds like a great idea! Well, see the thing is…

No, just no. Anyone who has played EO3 or 4 will be familiar with the subclass system – that system is infinitely better than Grimoire stones. See the problem here is that to get a Grimoire Stone you have to fight enemies and hope that a new stone spawns from you. This new stone will have some of the skills you have as well as inheriting some from the enemies. Seeing a problem here? Yes, you cannot get Grimoire Stones for any class or abilities you currently don’t possess. So if you want to get Dark Hunter skills you need to be using either a Dark Hunter or find one in a chest in the dungeons.

So if you want to have new skills you have to learn those skills but if you can’t learn those skills you can never have those skills. It’s like the Inception of bad design. It wouldn’t be terrible if you could swap up your party so the stones are actually incredibly useful during classic mode – want Ronin skills on your Troubadour? Level up a Ronin, spawn a new stone and slap it on the Troubadour. But in story mode there is literally nothing you can do besides just throw a few stones on people and hope that it’s enough to enhance your party.

What I eventually ended up doing was just pumping up collection skills (Mine, Take, Chop), letting Grimoire Stones get spawned with those skills as well as things like HP Up, Defense Up or Attack Up and then put those on. This way I just don’t have to worry about it. The only one worth using was the one that had Chaser skills. Put that on the Medic, give him a good sword and let him follow up the Gunner, Alchemist and Highlander’s attacks. 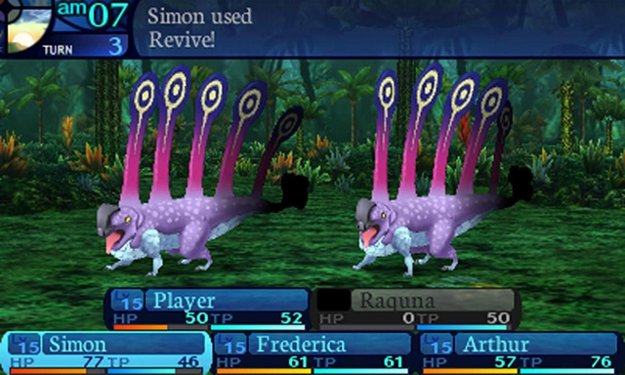 The Highlander is another good addition to the game that’s a double edged sword. He’s not as outright powerful in combat as a Landsknecht but his skills allow him to use his, and his own party’s, hit points in combat to buff their offense. He’s capable of dealing some astounding damage but only by sacrificing his HP to the point of endangering his life. There’s good synergy with the party, especially the Gunner thanks to her binds and elemental shots, and he was great fun at first but by the end of the game I just wanted my Chaser Landsknecht back.

Sadly, as fun as the Gunner and Highlander are, even if you beat story mode you can’t use them in classic mode. You can import your guild from the story but they come with their level, name and portrait. So you can never make your own Highlander or Gunner. The best you can do is repeatedly rest them until they’re level 1 and then start using them again.

As far as the game itself goes the improvements are immensely numerous and thorough. While the first few maps are very similar to their Etrian Odyssey 1 counterparts, the Millennium Girl maps get humongous and expansive very quickly. There’s a lot to explore, secret passages to open up, treasures to find and harvest points to uncover.

To make navigation simpler you have a new ability called Floor Jump. With this you can instantly warp to any staircase you have unlocked but unlocking a staircase is tricky – you have to reveal about 80% of the area of floor you’re on and then find the stairs up and down. Since you can’t use it on any floor you haven’t near fully explored you’ll still find yourself using Ariadne Threads quite often. It may sound overpowered but really it simply serves to get you through the levels quicker, allowing more rapid progress through the game.

By and large what you’re going to be playing feels like a tweaked up version of EO4 honestly. It’s got all of the improvements of that game; from the ability to see enemy weaknesses as well as more attractively laid out (and easy to understand) character skill system. If the developers simply take this system and apply it to all future games then the series is moving in a great direction.

Any complaints above are more mis-steps than real problems. If there’s one real problem with this game, a problem that actually impacts the ability to enjoy it, it’s the changes that were made to the boss fights. In EO1 the boss fights were part puzzle, part knock-down brawl. Once you figured out what you had to do to beat them you then had to make it actually happen. This becomes a massive problem when fighting Iwaoropenelep, the boss of the fourth stratum.

In the original game Iwaopeln (as it was known then) required you to struggle through defeating all 14 FOE enemies on the floor without returning. This could be circumvented by leaving yourself enough health to return to the healing fountain a few floors above, as well as saving your game by returning to the teleporter at the beginning of the stratum. 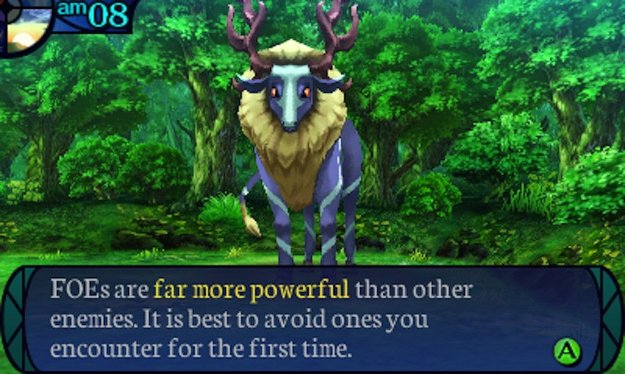 But here Iwaoropenelep has a brand new trick to him, one that there’s nearly no way to figure out on your own. You have to defeat a particular group of enemies (between 2 – 4 of them) on one side of the level and then sneak up on him. If any enemy notices you every enemy in the level respawns. Every. Single. One. So you have to beat them as carefully as possible and then find the one, and only one, way you can sneak up on the boss to fight him. Oh and he’s tougher than before thanks to his overuse of his petrification and confuse attacks so you might get killed after all of that effort. Paired up with the annoying powerful Corotrangul and Etreant you might find the bosses to be a stopping point. This is however faithful to the original so I’m not sure how much of a complaint this can really be.

The end result for EO: The Millennium Girl is without a doubt the single best RPG on the Nintendo 3DS, debatably the best game on the console in general. On the surface it looks like a shinier version of the original but to anyone who spent any time with said original and then turns to this the difference is like night and day. No matter what it takes if you’re a fan of RPG’s at all then this is a must own.