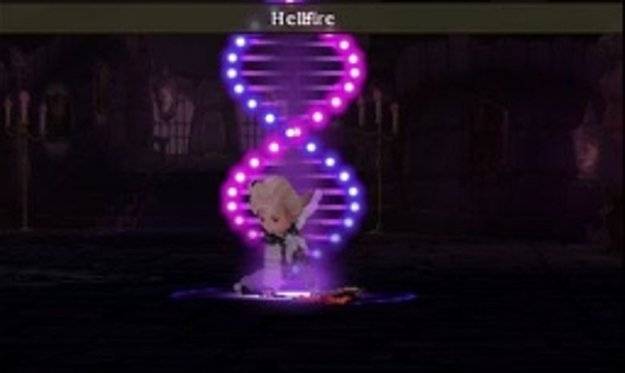 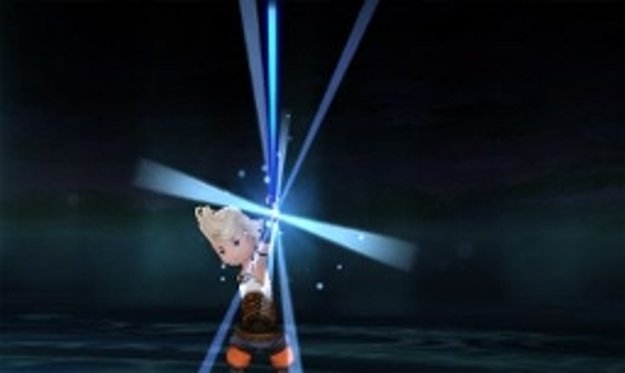 Way back in the long lost past of 1994 I was what you could charitably call a Squaresoft fanboy. I owned basically every game that the company released, even the ones I didn’t care for, and viciously defended anything negative anyone had to say about those games. Because it was Squaresoft, even their bad games they published were still damn fun experiences.

But it seems like after they joined with Enix they decided that those old fashioned games were lame. Only Dragon Warrior / Quest could be a classic, turn based combat series and, over time, everything else was going to become some weird action-RPG hybrid. It’s been a disappointing experience for me as I’m generally not a fan of… well, anything they’ve released in the past several years. Then you have something like Bravely Default come into the light and you realize just how damn good the games they release can be.

On its surface Bravely Default does actually come off as a fairly typical, generic JRPG. A great calamity has struck the world and only a group of teenagers can save the world. You’ve got the plucky farmboy, the naïve priestess, the womanizing comic relief and the tough girl with a heart of gold along with a non-human, fairy companion who dispenses advice and acts as yet more comic relief. This merry band marches off to save the world defeating people who are twice their age with pluck and determination, trying to save the world from the evil empire. 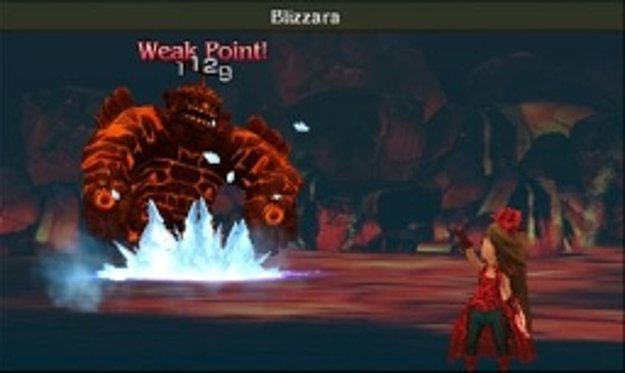 However it only seems that way because the developers are pulling shenanigans on us. We’ve grown to expect certain repeated themes and full on storylines so when you reach the point where the plot switches away from being utterly, completely generic it’s a surprisingly huge whiplash. The plot slowly blooms like a flower, revealing more and more beneath the exterior until finally settling on a story that works quite hard to defy your expectations.

Making this turnaround even better is the fact that the characters actually develop surprisingly well. As the game goes on the events going on cause the characters to really look at the world around them, trying to understand the world outside the small bubble that they grew up in and question the way that they looked at life. It’s a very realistic way for the characters to grow as people, managing to feel surprisingly lifelike for a game set in a world of magic and mystical technology.

There are some problems with the story though, although this is more of a matter of execution than bad writing.

There is a plot twist in the game that most of you have probably heard about by now but I will avoid spoiling. Suffice it to say that this twist has the effect of grinding the storyline to complete halt while making you do busy work for several hours. Essentially the game is about 50 hours long but it seems to contain story and / or character development for only about 20 of that, tops. This means that if you’re really involved in the storyline and character development, like I was, then this plot twist is going to go from being really interesting to really painful to play through in short order. 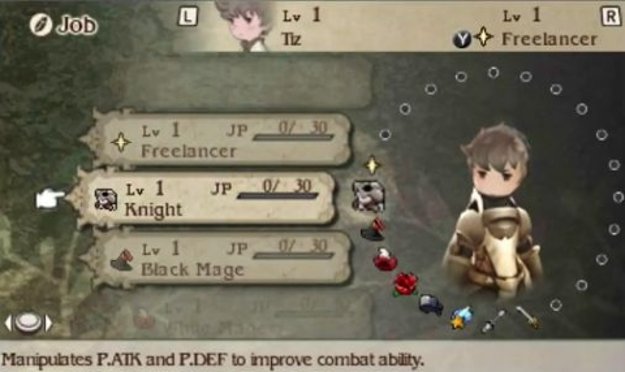 When the storyline takes a backseat the game can rely on the strength of its gameplay to keep you going. Bravely Default uses a job system that anyone familiar with the Final Fantasy series will immediately recognize. This, paired up with the classic turn based gameplay, gives you a large amount of strategy to indulge in. It starts off simply, with a limited number of classes and abilities from these classes that you can assign to your character. But as the game goes on you really begin to be able to mix and match, creating potentially game breaking strategies that allow you to just tear through enemies like a force of nature.

Interesting enough Bravely Default uses some unique mechanics that have the side effect of making almost all random encounters trivially easy. By choosing to “Default” your character will guard, reducing the damage they take, but also saving their turn. You can have three turns held in stock, four with a particular job. Then by choosing to “Brave” you can take up to four turns at once. So if you Default a few times and then Brave you could heal your party, buff your weapon and then attack twice. You’re even allowed to go into negatives on your turn count if you so choose, leaving you unable to act for a few turns while you wait for your turns to reach positive numbers again. 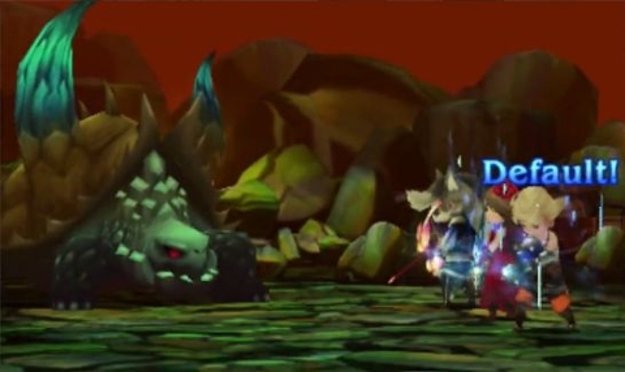 Against random encounters you can just Brave away, taking 16 actions to wipe out your enemies in one round. Against bosses managing your turns through Braving and Defaulting is the key to surviving since these encounters are nothing to sneeze at. Many bosses are more than capable of annihilating you in short order if you aren’t smart about how you fight them so strategy becomes your best friend.

Ironically enough though there are a number of areas where the developers obvious attention to the details of boss battles clearly wavered. There are some bosses who are nigh impossible without using very specific strategies or class combinations. Some will argue that this isn’t true but in most cases they’re simply using exploits in the game to get around this issue. This can be a pretty big problem if you’re not making routine use of the class involved nor can you use the exploit / don’t like using exploits. Most of these issues happen rarely enough that it’s not a huge issue but when it does happen it can be a game stopper, requiring a good amount of level grinding before you can proceed with the game.

I’m not one to complain about level grinding, I actually enjoy doing it due to some odd function in my brain, and Bravely Default makes it especially easy to do. At any point you can adjust the random encounter rate from the menu, going from none to occurring twice as often. You can even turn off your ability to gain XP if you just want to level up your jobs without overleveling your party. But the problem is that the games plot tasks you with exploring most of the dungeons several times so level grinding is just going to make you spend even more time in those same dungeons, making the experience feel even more draining. As time goes on many people will likely find themselves chomping at the bit for the game to just get. On. With. It. The level grinding only makes these sections feel even more intolerable.

What makes the repetition in the game even more glaring is that the game is actually a damn good looking one. The character models are all very well detailed, especially with the various costume changes as they swap jobs. All of the environments are detailed enough that makes you really feel like you’re moving through this fantasy world and exploring forests and desert dungeons. The only real weird aspect to the game is how the main characters are all done up in a more stylized, almost chibi art style while the enemies, especially the enemy NPC’s, are done in more realistic proportions. I have the feeling that it was done this way purposefully for some reason but the art style really feels like it clashes when your 17 year old teen is half the height of her father. 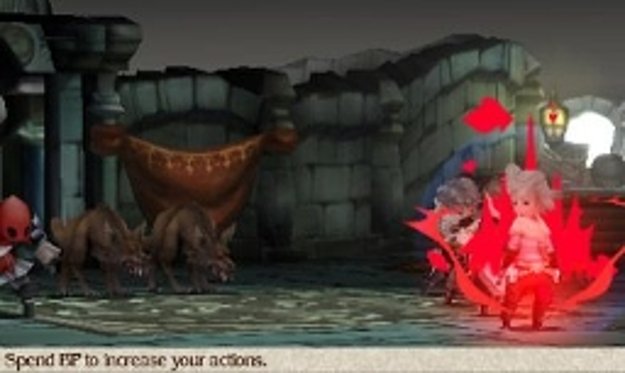 Honestly every part of Bravely Default is damn well done. The whole game has clearly been a labor of love for its developers and the whole thing is just well put together. It’s more of a matter that some parts simply seem like they weren’t entirely well considered or that the developers chose to stick with their vision even when it hampered the end product. The product has problems, just like every other game does, but it’s not like they make the game unplayable. Rather it’s more like the game has a few somewhat frustrating humps for the player to jump over that interrupt the flow of the game every now and again without changing the fact that it’s still a great game.